Re-integration of ISIS Fighters into Syrian Society... Does it Constitute a Time Bomb? 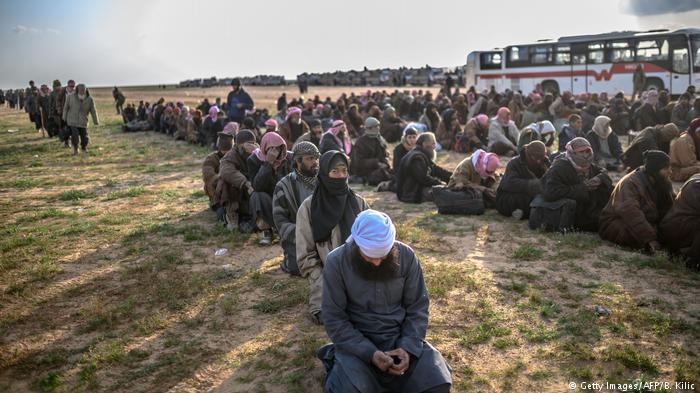 Hundreds of foreign fighters detained by the Syrian Democratic Forces (SDF) constitute a "time bomb" for the region and the world, a Kurdish official said, considering that their presence in Syria is a big mistake and might threaten the West if their countries do not make efforts to get them back.

Abdulkarim Omar, joint head of foreign relations at the Syrian Democratic Forces, explained that the forces are detaining around 800 foreign fighters, as well as about 700 wives and 1,500 children in the camps. Dozens of fighters and their families arrive in the area on a daily basis, according to Reuters.

Lawyer Abd al-Moneim Qashqash told Rozana that to find out the possibility of integration of ISIS fighters into society, we must first find out the reasons why they joined the group.

He explained that the search for a job or work may lead people to join ISIS. Many of the fighters move from one faction to another for many reasons, with financial situation being the main incentive for any fighter to join any faction.

The lawyer pointed out that it is known that in the areas it has controlled, ISIS has imposed restrictions on Syrians in order to push them to join the organization. In addition, some factions want to increase their influence ability, so they always attract people with military expertise.

Qashqash stressed the need for instructional and educational programs to integrate ISIS fighters into society. These specialized integration programs would aim at finding out the reasons why fighters have joined the group, knowing the fighters' mindset and figuring out whether they can give up the ideas they have adopted when they joined ISIS.

He added that it is crucial to provide every person with all living necessities, including housing, study and work. In case of absence of such specialized integration programs, the fighters who previously joined ISIS will turn to another organization, practicing their activities in another place. Therefore, they will constitute a time bomb.

The Director of the Syrian Democratic Forces’ Information Office stressed to AFP at the end of February that during three months, about 40,000 civilians, including men, women and children of different nationalities, have been released from al-Baghuz, including some 15,000 people who have been released since the Syrian Democratic Forces announced their last attack on al-Baghuz on February 9.

From the legal perspective, Lawyer Qashqash asserted that no person who has been proven to have committed violations or war crimes in Syria can evade penalization and fair accountability in accordance with the committed crime.

The lawyer pointed out to the existence of camps for the sheltering and detention of children and women of ISIS fighters. He also stressed the need to integrate women who have previously joined ISIS into the society.

Khattab added that the combatants who took part in the fighting must be prosecuted and held accountable, in order to be integrated into society after their accountability, in addition to the integration of those who did not participate in the fighting.

The Director of SDF’s Information Office, Mustapha Bali, said it is expected that the evacuation of civilians from ISIS’s last stronghold in the east of Deir ez-Zor would be completed, adding that "the forces will then attack the remaining ISIS fighters hiding there," according to AFP.

The United Nations has recently expressed its deep concern over the presence of about 200 besieged families in the ISIS-controlled areas in al-Baghuz.

Khattab clarified that the German government is carrying out “Life” program to integrate fighters returning from ISIS. The program which studies each case separately with their families, and the reasons for their joining of the organization, in order to integrate them into society.

She also referred to the implementation of Disarmament, Demobilization and Reintegration Programs powered by the United Nations in post-war countries, and explained that these awareness and educational programs are meant to integrate individuals into civil society.

Germany ranks third in terms of the number of fighters joining ISIS in Europe after France and Belgium. Security Services stated that one third of these fighters who had gone to Syria returned to Germany, and despite the danger they pose, prosecution could not charge them for other crimes except for  belonging to terrorist organizations, according to an article published by "BBC."

Denmark and international community are working to implement a joint program aiming to study cases of the returnees from conflict zones and prosecute those involved in murders. They are also seeking to reintegrate the rest by guiding them, educating them and providing them with job opportunities, housing and education to make decent living.

Referring  to  the women who used to provide  ISIS with logistic and health services and are now outside the organization’s held areas, Khattab stressed the need to integrate them within community, especially in women's civil society organizations.

ISIS is considered as the most dangerous organization that has threatened the Syrian revolution and activists. Therefore, integrating them into society will not be that easy, especially leaders. They must be brought before court and punished, each according to his rank, for some of them joined the organization and did not participate in any fight," said activist Mona al-Fareej during an interview with Rozana.

She pointed out that the children of ISIS fighters can be easily integrated into society and the extremist ideas they have in mind can be eliminated.

Speaking of the ex-wives of ISIS fighters, Khattab believes that one must figure out the reasons that pushed them to join ISIS and marry fighters, whether they were forced to do so, or had money as a motive. Then, one shall work to integrate them with the other children.

SDF is waiting for the complete evacuation of civilians and the return of its fighters previously detained by ISIS, in order to take the decision of breaking into ISIS last pocket in al-Baghuz, in east Deir ez-Zor. SDF estimates the number of the people trapped in al-Baghuz to be between hundreds and thousands, according to their updated database relying on the testimonies of the ones who left the area.

Rozana conducted an opinion poll in Istanbul, Hama countryside, and Raqqa about the issue and asked the following question: "Is it possible to reintegrate ISIS Syrian fighters into society?" Some of the respondents believe that the ones who did not participate in the fighting or commit any murder can be integrated into society because they are Syrians after all. However, others said that they cannot be accepted by society after committing crimes and they must be held accountable and punished.

SDF, backed by the US-led coalition, waged the so-called "the final battle" against ISIS in east Syria on 9 February.

SDF took control of ISIS’s most prominent stronghold in the city of Raqqa, backed by international coalition led by Washington, as result of the four-month attack waged between June and October 2017.

After taking over Raqqa, SDF and Internal Security Forces of Raqqa Civil Council arrested thousands of ISIS members, most of whom were local Syrian fighters from Syria. However, Arab clans and Raqqa local figures intervened to secure the release of the ones who were not involved in committing murders or other crimes or caused the displacement of civilians.