The Arrest of Dissident Security Officers in Europe... Victory for Victims or Selective Movements? 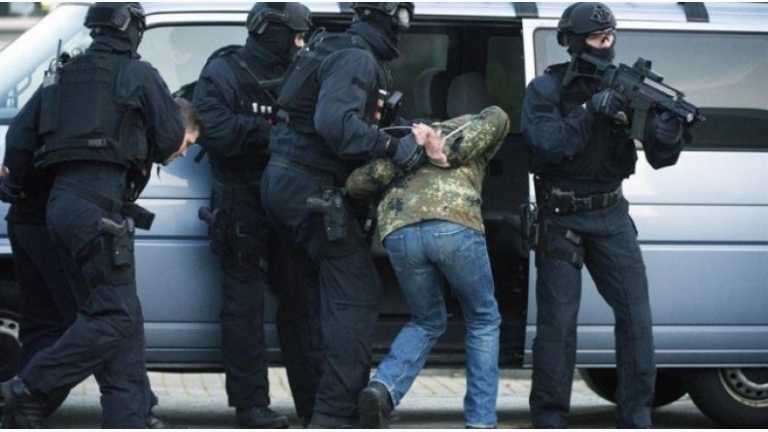 In mid-February, the German authorities arrested dissident investigation official from the Syrian General Intelligence Service, Colonel Anwar Raslan, and the dissident First Assistant, Iyad al-Omar, who headed a unit to arrest the wanted people for the Syrian regime. They have been suspected of committing grave violations against detainees, including torture, during their work with the Syrian General Intelligence Service.


Lawyer and human rights activist Anwar al-Bunni told Rozana that the party that would grant amnesty to the dissidents or those who contributed to the Syrian revolution must be ashamed of doing so. However, to date, no party in Syria can grant such amnesty or can determine the person to be exempted from trial or to be prosecuted, as long as the Syrian revolution has not yet reached its outcome.

Al-Bunni pointed out that the international judiciary holds accountability in accordance with crimes against humanity and war crimes. It does not take sides or condones any other party; and therefore it punishes all those who committed a crime, whether war crimes or against humanity.

Al-Bunni explained that there are two ways of the arrest and prosecution of the suspects of committing war crimes and crimes against humanity: first by the prosecutor who launched the case and built it according to testimonies of victims. Those victims are often refugees in Europe who have been previously arrested in Syria and who have given statements about the time during which they have been arrested and the torture they have been subjected to.

Al-Bunni added that the prosecution had collected and analyzed the evidence. When it had found two security members, who have been accused of war crimes and crimes against humanity, in Germany, it announced it would take care of the case.

As for the second way, it is carried out through specialized lawyers who deal with anyone who knows the perpetrators of war crimes or crimes against humanity, and who has more evidence than just information or photos. In addition, there must be victims or eyewitnesses of the crime, instead of a single witness; that is, the crime has to have affected hundreds of victims.

This investigation is supported by the Commission for International Justice and Accountability (CIJA), a group funded by the USA and European governments.

Reuters news agency quoted the Commission’s Deputy Director, Nerma Jelacic as saying that the Commission has provided documented evidence with testimonies of witnesses against Colonel Raslan, explaining that "in 2011 and 2012, Anwar had headed Branch 25, and later Branch 285 in the Syrian General Intelligence Service, whose officials have enjoyed absolute freedom to arrest and interrogate the suspected opposition activists."

Nerma Jelacic added that "these two branches have the worst reputation. One of our witnesses described Branch 251 as the most influential, dangerous and secret branch, which is responsible for 98 percent of the committed violence."

On the other hand, AFP agency pointed out to a German-French security coordination to prosecute the perpetrators of "war crimes" in Syria, following the leak of 55 thousand photos of detainees in the regime’s prisons, who were killed under torture.

Following the circulation of the photos, known in the media as "Caesar Photos,” France and Germany announced the prosecution of perpetrators of "crimes against humanity". The prosecution was under the "universal jurisdiction" which allows these countries to hold accountable those who have committed legal violations outside their territories.

In this context, Lawyer and Legal Consultant Mustafa al-Qassim told Rozana that "the crimes that are being committed in Syria are war crimes and crimes against humanity. These crimes are not subject to statute of limitations, change of location or change of position. If a person is proven to have committed one of these crimes, his punishment is a must.  On the other hand, in case he is proven not to have committed such crimes, he is either exempted or declared not having been involved in the crimes for lack of sufficient evidence.

Al-Qassim pointed out that the court might take the question of dissent into account. However, this does not mean that the person is exempt from the repercussions of the crimes in which he assisted or intervened when he had his position and could have prevented such crimes.

Al-Qassim added that in a country like Germany, where the law prevails, these persons are not arrested in a hypothetical or arbitrary manner, or based on a complaint or written report. This is rather preceded by investigations through which testimonies are gathered and witnesses are heard. In case the investigative judge considers that it is likely they have committed such crimes, an order is issued to arrest and bring them to trial, so they can prove their innocence by hiring lawyers and defending themselves.

It is not the same case with Syria and those who were brought before field and terrorism courts, who were detained for many years, whose news have been cut off and who were forcibly disappeared.

In response to a criminal complaint filed against him by former detainees, the German prosecutor issued the first international arrest warrant last may against a high-ranking Syrian official, the head of Air Force Intelligence, General Jamil Hassan. Last November, the French judiciary issued an international arrest warrant against three of al-Assad regime senior officers, namely the head of the National Security Bureau, Ali Mamlouk, head of the Investigation Branch of the Air Forces, Abdel Salam Mahmoud, and General Hassan.

Some others fear that such accountability would be a prelude for pursuing dissident officers, many of whom are currently in countries abiding by the sovereignty of law. Al-Qassim stressed the need to "prosecute the perpetrators of war crimes or crimes against humanity even if they were committed before 2011, and whatever their number was as long as they committed these crimes, arrested innocent people, tortured, eliminated them, and brought them before unmerciful field and terrorism courts."

On the other hand, journalist Firas al-Alawi told Rozana that in the future there will be no stability or any solution unless justice is brought in Syria. He stressed that the best way to return to the Syrian society is to achieve transitional justice. He also pointed out that diverting such justice into retaliatory or selective is what led to identifying the ones that committed the crime and how and when they did it.

Al-alawi pointed out that arresting a security officer who defected from the regime since the beginning of the Syrian revolution in a selective manner, cannot be compared to the prosecution of security officers who are still committing crimes so far. He also declared that accusing a certain officer belonging to the Syrian regime of committing a crime is very difficult because all the detainees in the regime's prisons are obscured and cannot recognize the interrogators who subjected them to investigations. The mere presence of an officer in a security branch without "a clear evidence of his culpability does not mean that he is a criminal".

He pointed out that the mobilization of efforts to arrest the two officers comes from a limited perspective, because the crimes committed against the opponents since the beginning of 2011 are too many. He pointed out that the ones opposing this "selective" approach to trial do not justify the crimes these officers may have committed during their service, but at least they have taken the revolution side since 2011 and adhered to its values and ethics." He added that up to now the European judiciary has not decided or declared anything related to these officers and that it has only issued a call. However, "we have criminalized them before they were criminalized by the European law."

During an interview with Rozana, writer and journalist Hafez Qarqout said that the revolution has no right to acquit anyone. He wondered about whether a person who committed war crimes in Hama then has decided to join the revolution can be exempted from a crime he had committed against thousands of Syrians in Hama?

Qarqout stressed that those who committed crimes cannot escape punishment or accountability and that the law cannot decide on behalf of the victims. Rather, it is the victim who should decide. He also highlighted that torturing anyone at al-Assad's prisons or subjecting him to retaliation in some way, is an individual crime that cannot be erased or forgotten, for it is a crime against humanity and a moral and ethical dilemma..

It is noted that, in one of its reports, the Syrian Network for Human Rights stated that the number of people killed under torture in Syrian prisons since March 2011 until June 2018 exceeded 13,000. The network estimated the number of detainees in the prisons of the regime at 80.000.

Rozana conducted an opinion poll in Idlib and Hama countryside and Qamishli about the issue and asked the following question: "Does the security officers’ defection spare them of responsibility for the previous crimes they have committed?" Some of the respondents said that dissidents will not be punished because senior officials such as Bashar al-Assad were not held accountable despite having committed war crimes for eight years. Others confirmed that those dissidents would be punished by international courts for having committed crimes against detainees.