On Valentine's Day: Syrian Women Struggle with the Grievances of War and the Bitterness of Separation 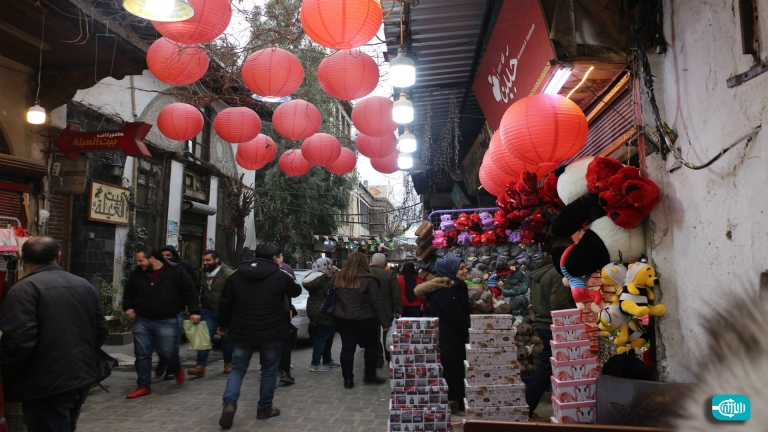 The war that has been going on for more than seven years in Syria was the main reason behind the separation between lovers in most parts of the country. As the world celebrates Valentine's Day, women in the north of Syria are living through painful stories of war and separation after their husbands have been arrested or deported.

Huyam has exchanged vows of love and faithfulness with her fiancé, before his arrest. Now, he is only a number in lists of detainees.

Despite all the marriage proposals, Huyam, 23, could not forget her imprisoned fiancé for a single moment.

Talking about her agony with the memory of her fiancé Houssam, Huyam said:"I always imagine him in front of me. I cannot believe the idea that I could no longer see him.”

As more than four years have elapsed since Houssam's arrest, Huyam’s family and friends blame her now for waiting this long for his return.

She concluded her interview with Rozana, saying: "I am determined to keep waiting for him.  I will not lose hope that my fiancé will get out of prison safe, even if I had to wait all my life and be considered as a spinster.”

Since 2015, thousands of Syrians have crossed the border towards Europe to escape death. They have risked their lives during their journeys across the Mediterranean.

Most of these refugees were welcomed by Germany and Austria, while they were prevented from entering to Hungary, which denied them their mobility rights and started building a wall with Serbia. Hence, the conduct of the Hungarian authorities connotes the discrepancy between the European states in their policy towards the Syrian refugees’ crisis.

Sana's husband sought refuge in Germany in the hope of improving his family's financial condition, however, five years later Sana and her children are still unable to join him in there.

Sana believes that after her husband’s departure, their love and care for each other have grown bigger, in contrast to the time when he was still living in Syria with her. Back then, they “used to argue all the time”, she said with a smile on her face.

Hardly a day passes without Sana having a WhatsApp video call with her husband, as he is always worried about her and the children.

“When my husband hears the news of the bombing and massacres taking place in our region, he immediately gets in touch with us to be assured we are fine,” Sana told Rozana.

She pointed out to the difficulties she faces in Syria and said “I became the sole person responsible for my children, I try to take care of them and raise them without making them feel the loss of a father whom they no longer see except through the Internet.”

She said "I still feel scared and confused. I have not been used to living on my own despite all these years. However, I thank God that my husband is there and breathes, although he is far. I have never lost hope that fate would once bring us together, unlike those women who lost their husbands in the war and death separated them forever.

For several years, the areas under the control of the opposition in northern Syria have been subjected to frequent bombardment which is intensifying in vital and strategic areas.

Lamia, 30, keeps her memories with her husband, whom she lost by the Syrian regime's planes bombing in the town of Maarrat al-Nu'man, south of Idlib province, North of Syria in late 2014. She sighed and said: “I still remember how we used to celebrate Valentine's Day every year. He used to bring me a simple yet distinguished gift.”

The celebration meant a lot to Lamia, as it carries her happiness, familiarity, respect and mutual love with her husband. She said: “The regime has killed the most precious thing we had. It killed our feelings and our desire to live, and we became overwhelmed by the fear of losing our loved ones.”

Lamia spends her time working at a sewing factory to support her four children, and she spends the short time left at the end of the day with her husband's memory.

The interruption of the Internet destroys our romantic moments
Turkey, which is the closest country to Syria, is Syria's favorite country among the countries of asylum, but the difficulty of entry has separated many couples who have crossed the border.
Yassamin, 25, entered Turkey with her husband through smugglers in late 2014 and settled there in the border town of Antakya where she worked with her husband on a cattle farm. Despite the hardship she was happy with her married life.

Three years later, Yassamin decided to visit her family in Syria, taking advantage of the opening of the borders by the Turkish government during the holidays.

She said goodbye to her husband and promised that she would not stay for a long time, "but the odds were not in her favor," as she put it.

"I had a fixed date for my return on my exit card, but I could not leave on that date because of my two-year-old son's severe fever," Yassamin said.

The young woman tried to speed up her son's treatment and travel on the next day. Unfortunately, she was not allowed to leave Syria by the Turkish border police due to the closure of the border crossing.

"Days go by as if they are years. I have been moving between my parents' house and the house of my husband's family like a homeless woman. I realize how much a burden I have become to them and I do not blame them for that. They already suffer from difficult conditions, lack of job opportunities, poverty, high prices, and displacement," Yassamin says

Yassamin and her husband communicate from time to time via social media websites because she does not have the equipment to constantly intensify the Internet connection. "The network often interrupts during my conversations with my husband and while he is getting reassured about us. He sometimes happens to be romantic and tells me sweet words. Unfortunately, the Internet interruption destroys these romantic moments that take us back to the days when we were engaged," Yassamin said.

Yassamin suggested the idea of ​​returning to Turkish territories through smuggling, but her husband refused the idea due to its risk on her and the children.

She in turn rejected her husband's idea of ​​returning to Syria for their sake, because if he does, he would lose his work, which he hardly found, and which he considers their only source of living.

As many other people with similar cases, Yassamin is awaiting the reopening of the border, pending the occurrence of something that would allow her to travel back to her husband, or the ending of the war, so her husband would return and they would live with their children together in one house like all spouses do around the world.