Khitam and the sin of getting Lebanese citizenship 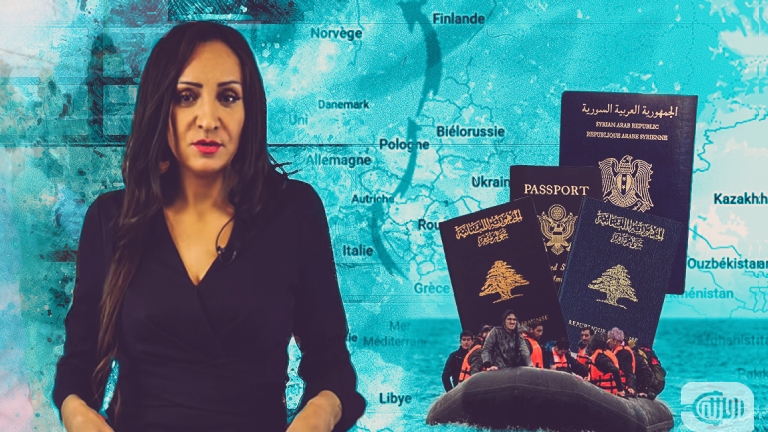 Loujein Haj youssef - Khitam was sitting in her small house, wondering whether to pack her bags or find a magic wand to save herself and guarantee her to stay in Sweden after the Immigration Department had decided to deport her and her daughter to Lebanon.

She migrated twice: once to the Gulf and then to Europe, and each time she was driven by her will to seek a better life as an independent woman.

"I had to prove myself, consider my options and ambitions, and rise to the challenge of being a female and building a career of my own," says Khitam.

Being attracted by the Arab-like cultural diversity and society, she migrated to the UAE at first in 2000 in response to a job opportunity offered by media.

Khitam lived in the UAE for 14 years and worked at one of the most important media institutions there. However, she felt like some of her dreams were not yet fulfilled.

As a woman living in such societies, whether Syrian or Emirati, someone will always try to put you down, for Arab society gives more freedom of action and expression to men. However, Khitam believes that "a lot of women managed to make great and well-deserved achievements, and anyone adopting other methods to achieve success will not be able to keep it going."

She stressed her ability to succeed despite all the difficulties, saying: "I have been the only female responsible for monitoring political profile in the UAE media, in the last years."

This success was no mere coincidence, but the result of the efforts made over the years. "Women can also be jealous when it comes to the success of another. One of my colleagues filed a report to the security services because of my diligence. However, they understood the situation, thank God"

In the UAE, fighting at work was different. The chief editor once invited me for coffee, which refers to harassment there, and when I refused to go with him he denied me the right for a pay raise.

On the same boat, three women were defying the sea

Arab countries accuse some Syrians immigrants of taking over asylum opportunities from refugees living in border refugee camps in Lebanon, Jordan, and Turkey.

"The war has destroyed everything we have in Syria. We have nothing at home or a homeland to return to, just like the rest of Syrians," she clarified.

Travelling was no easy decision, for Khitam was constantly crying over the sight of the pictures of the drowning immigrants and their tears. "My daughter witnessed the way I was nervous because I was afraid that the repercussions of my decision might be disastrous."

"Mom, why are you afraid? God will protect you and I will stand beside you," said Khitam’s daughter, 7,  in an attempt to put an end to her mother’s confusion, especially as fears of the dangers the trip are posing and survival chances were the focus of the three women's daily discussions.

Khitam married a Lebanese man in Dubai. However, the marriage did not last and she asked for a divorce after giving birth to her daughter, aged 8 years old and is currently living with her in Sweden.

"Marriage and divorce taught me a lot of things and helped me understand life better. I had no problem with divorce or being called a divorcee," said Khitem.

Sea journeys are not that easy

Traveling by sea is no easy journey. "I used to write a lot of news about the sea and horror, but the fear I have experienced was beyond my expectations. The wave was high and I was holding on to the boat like a child and keeping an eye on my mother and daughter all the time," she said.

During the 3 hours journey, Khitam recalled all the stages of her life as well as the screams of refugees traveling by sea and their stories that she kept up with.


She heard many stories about the smugglers. Her brothers who went to Sweden first were the victims of fraud during their trip to Europe. "I was very cautious in dealing with strangers. We met taxi drivers, one of whom invited us to take the car to Germany. They were part of organ trade and human trafficking networks," Khitam added.

"The first attempt was a failure. My brothers were supposed to come to Turkey and take us with them by car. I thought the plan was perfect, so I decided to go for it and felt reassured,” she explained.


Khitam waited for a long time and considered going back to the UAE.

But the second journey was unbelievably easy. "After I had a deal with the smuggler, I felt afraid and stepped down. Back then, 45 people were supposed to board. I refused to join them. I do not know what happened. Many of them decided to turn back and only 28 of them remained. That’s when I sought to seize the opportunity," she clarified.

According to some sources, human smuggling networks have generated up to 6 billion dollars profit by 2015. However, this number fell by one-third in 2016 following Europe and Turkey's immigration agreement, according to Europol statistics.

In 2016, the Austrian Federal Minister of the Interior Wolfgang Sobotka revealed that his country dismantled a Turkish trafficking gang that had smuggled some 10,000 people into Western Europe over the past 10 years.

The minister said that the first route the smugglers took started from Istanbul through Montenegro and then to Vienna via Balkan countries, while the second route would cross the sea starting from Turkey to Greece and then to Western Europe.

Sobotka referred to a third smuggling route, which starts from Istanbul to the city of Lviv in Ukraine and then the Austrian capital. He pointed out that the refugees’ destinations included Germany, Italy, Switzerland, France, and Sweden.

"There was blood on the way and on children's toys. We would find some personal belongings like shoes. The road was a reflection of the extent to which those people were suffering as they crossed this way," said Khitam recalling many details.

Most of the refugees carry what has been left of their lives, including their past, memories and loved ones in pictures. However, trafficking routes have also stolen those, for they became a heavy burden for refugees to hold along the way, so they fell on the road. "I was observing the way immigrants were trying to cross Macedonian borders and their clashes with the police," she asserted.

She added: "I see all of those details as we were crossing the road just like a news scroll when I spot a toy on our way or a shoe someone had lost."

Khitam did not carry pictures or personal belongings with her. She gave them away to one of her friends. She only took a ring she received as a gift, which she considered as a lucky charm protecting her on the way.

Khitam managed to obtain Lebanese citizenship and passport, though her marriage did not last for long. At first, she tried to travel to Greece, but her request was rejected. Then, she entered the Turkish territory and after imposing a visa on Syrians.

Turkey imposed a visa on Syrians at the beginning of 2016, having either traveled by land or sea, to curb the influx of immigrants coming to Europe.

The United Nations High Commissioner for Refugees (UNHCR) declared that 800,000 people made it to Greece from Turkey using sea route in 2015, most of whom are Syrians.

After a long journey, Khitam arrived in Sweden and provided the necessary documents to acquire asylum along with her mother and daughter. However, an unexpected surprise was awaiting them.

"I submitted my papers and my Syrian passport, but during fingerprints check, they discovered my identity following the Lebanese passport I submitted to Sweden," she clarified.

She was not left with too many other options and applied for relinquishing Lebanese nationality at the Embassy in Stockholm. Khitam was granted Lebanese citizenship and gave it up in less than a year.

However, the procedures of citizenship renunciation remained pending, waiting for the Lebanese President Michel Aoun’s signature.

While she was waiting for her papers, she started looking for a job in the field of media, especially that she has about 20 years of experience in radio, television and print journalism. She worked hard to get a similar job.

Khitam and her daughter, Maria, managed to work at Alkompis Media Network in Sweden, and her daughter became one of the youngest TV presenters. However, the Swedish Immigration Department’s decision to deport her in a short period of time had a tremendous impact on them.

I'm not Lebanese. I do not know anything about Lebanon and I have no future there. My mother and brothers are Syrians, but I am half Palestinian half Syrian.

Now she is facing the challenge of living in Lebanon again. "My mistake was that I had Lebanese nationality in the first place. They asked me to extract a Lebanese passport. I do not know what to do," she said.

"My daughter is scared and I do not know my fate."