The Cultural Situation In The Regime Prisons … Stories Not Told Yet 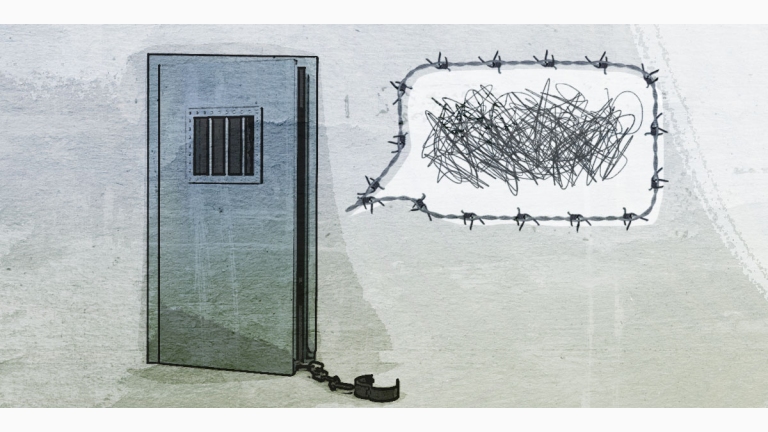 The Syrian regime announced late last year the opening of a cultural centre in the prison of Adra in Damascus, "the largest prison in Syria," in a move considered by former detainees a new attempt by the regime to improve its prisons’ image in front of the world, especially after revealing acts of torture and killing against detainees in recent years.

Huda, a civil society activist who was detained at Adra Prison just before the opening of the prison's cultural centre in November 2018, told Rozana that "the prison administration deprives political detainees of books, notebooks, and pens."

To Rozana correspondent in Damascus, Aram Habib, Huda talked about an experience that happened with her inside the prison, when she asked her fiancé (Samir) to bring her a pen to the prison, and hide it well. Indeed, Samir managed to bring a pen to Huda, but a few days later the prison officers raided the political prisoners' section in search of pens and notebooks, and confiscated them.

She pointed out that she and a group of women activists held awareness meetings inside the prison to discuss political, intellectual, and social issues. She explained: "We were looking for places to avoid the surveillance cameras inside the prison and when we were revealed, we were transferred to solitary confinement."

The situation of the detainees in Adra prison differs from those held in the prisons of the security branches. Political detainees describe Adra prison as the "heaven of Syrian prisons" in terms of rights (few) that detainees enjoy.

According to the "Syrian Network for Human Rights," some 81652 Syrians have been forcibly disappeared by the Syrian regime alone since March 2011, until June 2018, while the number of victims who were killed by torture in the regime's prisons was approximately 13,066 in the same period.

Amer Khalil, a pseudonym, was arrested in the Air Force Intelligence branch in Aleppo for several months in 2013 for his participation in the peaceful activity opposed to the Syrian regime. He told Rozana that "the detainee uses paper and pen only twice during his detention… .The first is when he is asked to fill out a document about the details of his life, family and friends immediately after entering the prison. The second time is in the investigating chamber, when the detainee is asked to write down his confessions, which he made under torture, and to sign them with thumbprint.

"Personal contact is absolutely forbidden, so detainees resort to whispering," and the topics are often focused on questions, including … When will we get out? Will we get out of here? What happens outside the prison? And what are the developments in the situation in Syria? ," said Amer.

To talk about the cultural situation in the prisons of the Syrian regime for the detainees of opinion and politicians, before the start of the Syrian revolution, that is, before 2011, Rozana met Deeb Qatt (a former detainee in Saidnaya prison).

Qatt pointed out that before 1980, the Syrian regime allowed detainees, whether in regular or military prisons, to continue their studies inside the prison, even to register in universities, and to go out to sit for exams.

However, after 1980, in conjunction with the activity of the Muslim Brotherhood, the regime prevented continuing studies in prisons, especially detainees in military prisons, most of whom are political prisoners.

He added that "the prisons of the security branches also banned newspapers and magazines only in special cases." Qatt recounted an incident at the Palestinian branch of the military security in Damascus that happened in 1988 when Lebanese detainees organized a rebellion inside the prison, which resulted in cultural privileges that did not last long.

As for the Tadmor prison near the ancient city of Palmyra in the east of Homs, Qatt pointed out that "the cultural privileges provided were different according to the forces to which the detainees belong, i.e. according to the charges and the regulations. For example, the regime imposed greater cultural isolation on the detainees affiliated with the Muslim Brotherhood, compared to those affiliated with parties, such as communist labor, for example."

Books (allowed by the regime) in Tadmor prison were confined to titles related to the Baath party, the ruling party in Syria, and the criminalization of the Muslim Brotherhood party.
In Saidnaya Prison, near Damascus, the situation is totally different due to the affiliation of the prisoners. "There is a library inside the prison, but the quality of the books was trivial," Qatt said. Detainees were allowed to bring books from outside the prison.

He explained that he and his fellow members of the Communist Labor Party had allocated part of their budget to pay for books brought from outside the prison. They received books either from their home libraries or from book fairs held in Damascus.

He added that the library of their ward cell in Saidnaya Prison, which included the most prominent and well-known books, covers 4 meters in height and 12 meters in length. They were also receiving magazines and secret pamphlets, which they might not have been able to get hold of outside the prison.
There were also seminars, poetry debates, and celebrations, such as Nowruz (the Kurdish Spring Festival).

Qatt pointed out that the detainees of the Islamic movements in Saidnaya prison were almost isolated from the outside world, and the regime did not allow them to practice any cultural activity. We were secretly passing them books through the prison ventilation and lighting lanes (i.e. holes between the cells).

Last year, Amnesty International prepared a report entitled "The Human Slaughterhouse," which revealed systematic executions carried out by the Syrian regime in Saidnaya Prison, in Rif-Dimashq, since 2011.

Recalling a strange incident which occurred in Saidnaya Prison, Qatt said that the prisoners of the Communist Labor Party rebelled in the prison. Therefore, the administration decided to punish them by sharing cells with the Muslim Brotherhood detainees.

As for the newcomers to Saidnaya prison, Qatt said that the Islamic movement’s detainees, who have been transferred from Tadmor to Saidnaya prison, were completely cut off from the outside world. They could only keep themselves attached to the real world through reading magazines and newspapers they used to get in secret in Saidnaya prison.
Ex-prisoner Deeb Qatt stated that "the Syrian regime does not consider the political oppositionist as a citizen at all."

Syrian physician, writer and former political prisoner Rateb Shabo, said that "educational conditions are very different from one prison to another in Syria, i.e. between the prisons of the security branches, Tadmor two prisons, Saidnaya prison and Adra prison, which can be described as the golden place for the political detainee."

In Tadmor prison, the regime prohibited everything that would enable the detainee to spend time in a constructive and entertaining way, in an attempt to kill the detainee's sense of himself and value, said Shabo.

"We used to share stories we had read before orally, and write on tin cigarettes’ packs using a needle, so that the writing would appear only when the paper is tilted."
We also used to write on cigarette packs with a metal toothpaste tube. I actually tried to learn Turkish from another imprisoned friend. However, the head of the prison sub-unit told me, that " we have brought you here so that you will forget all what you have learnt before not to learn something new."

Tadmor Prison, located 250 kilometers away from northeast of Damascus, was used to arrest tens of thousands of political prisoners and witnessed massacres and elimination carried out against detainees. Mustafa Khalifa described this in his novel The Shell, saying that "in the desert prison, death and life will be synonymous, and sometimes death becomes a wish."

As regard to the cultural exchange between the detainees, Shabo said that "the acculturation among the detainees inside the prison is characterized by an ideological nature," explaining that "many detainees enter the prison while they are young and accumulate the ideas of other detainees and leaders, and this type of education has a relatively negative side."

In spite of the Syrian regime’s attempts to obscure what is happening inside its prisons, many former political detainees have transferred the reality taking place in prisons through writing novels such as The Shell written by Mustafa Khalifa, What Is behind these Walls by Rateb Shabo, as well as organizing art galleries and documenting the testimonies of former detainees, especially after the beginning of the Syrian revolution in 2011, and the subsequent arrests of tens of thousands of oppositionists.