Douma: Survived Bombardment and Hunger .. Arrested By Army of Islam 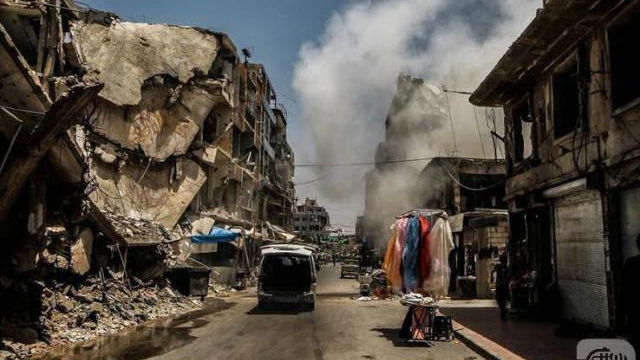 In one of the streets of Douma (Rural Damascus), Abu Mohamad stopped in the middle of the street trying to connect his cell phone to the internet, but a group affiliated with the Army of Islam, arrested the man and put him in prison for "treason and dealing with of the Syrian regime."

Abu Mohammed says with a sigh: "It is ironic that I find myself in the prisons of the Army of Islam for a month and a half, and I am the one who participated in the Syrian revolution against injustice since it erupted! I experienced beatings and torture for things I have never done, and saw a lot of oppressed people like me, and have been released only after some people guaranteed me." In “Douma”, the besieged city by the Syrian regime forces for more than three years, people are complaining of anther injustice is being practiced them, as if depriving of the most basic rationale for life, and the hunger that has become the only visitor, is no longer enough for torturing them, and there is no escape for them from the death machine's and arrest of other.

Firas a young man in the city, spent a whole month in the Army of Islam’s prisons, and was arrested on charges of been disturbed by the noise of a generator owned by one of his neighbors, but the complaint against him was in vain, on the contrary, he turned from a right holder into an accused!

The young man said: "In the beginning I tried to negotiate with my neighbor about the noise that was shaking my house, and when he did not show any interest, I filed a complaint against him, I was surprised when I know that one of the workers at the station is close to him, and simply I was imprisoned instead of him on charges of attacking him and smashing generating".

God does not waste the right

Firas was not released, except after he waived his rights begrudgingly, because the favoritism spread in the police station, came close to get him killed on the charge of disbelief, as he said, he finally was forced to tolerate the humiliation and beatings he exposed to, and had to accept the apology of the police station members who have confirmed that what happened was a mistake and that “God does not waste the right”.

Residents of Douma don’t like to beleaguered talk about any arrest experience within the city, preferring to remain careful, however, “Abu Uday”, who we met downtown, expressed his opinion quite frankly, saying: "We have no choice rather than living with the tragic life and favoritism that have become prevalent in the city, and the lucky is the one who knows a “Sheikh” in the Army of Islam- Military Officer, so he can do whatever he wants." So far there are no accurate statistics on the number of detainees in the prisons of the Army of Islam, according to media activist "Abu Khaled", who pointed to the seriousness of his speech about that opaque case.

Abu Khaled says: "arbitrary arrests occur in the whole eastern Ghouta, some of the former detainees in the Army of Islam prisons, spoke to me about how bad the humanitarian situation in general in the prisons, especially the Repentance Prison, to the extent of being not less than the Syrian Regime prisons in terms of torture and humiliation, also pointed to many detainees who stay there for months without trials, and only God knows their situations."

After the practices that led sometimes to the murder under torture, protests against the Army of Islam in the eastern Ghouta have escalated, most recently in June last year, when dozens of women came out in Douma, in front of the Army of Islam’s headquarters, demanding to release their sons and husbands of army’s prisons.

The Army of Islam was accused by international humanitarian organizations on arresting civilians and activists, led by the human rights activist Razan Zeitouneh and her companions, who were abducted while working in the eastern Ghouta at the end of 2014, but the army denied any connection with abducting, and still unaccounted so far.