"Sahabat Forces", Who are They? 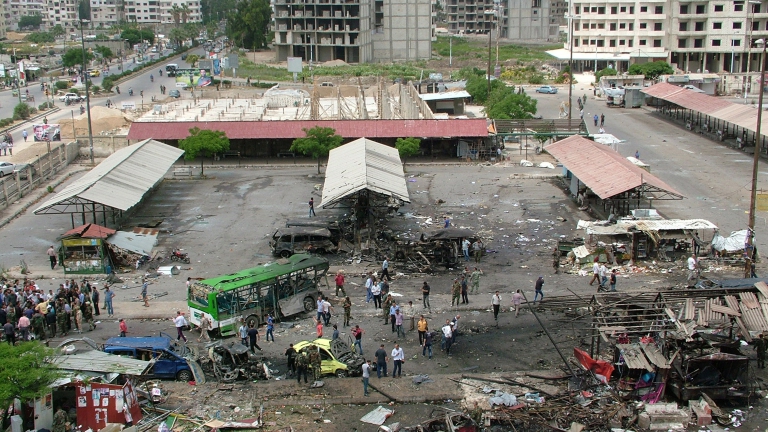 Tension prevails in the "Karnak" camp for the displaced Syrians in Tartous, after it was attacked by gunmen, on Monday.

According to the Syrian Red Crescent Organization, the camp houses about five thousand displaced people distributed in dozens of tents, on an agricultural land, living minimum living conditions.

Most of the residents of Karnak camp, are the families of soldiers who are dissident from the regime's army and joined the ranks of the armed opposition, and the other families who lost their breadwinners and their homes.

What about the living conditions in the camp? Adnan, a civil activist from Tartous, confirms that there is no power or authority controls the camp, or protects it, any person can get in and out, without being stopped by anyone.

He added: "On rare occasions we note the presence of military security patrols, or joint patrols near the camp."

Karnak camp is not the only one of its kind in Tartous, but there are several camps for displaced people there, as a home for about 30 thousand displaced Syrians from different regions.

These camps are he supervised by the Red Crescent Organization, in cooperation with the province of Tartous, and some NGOs, which provide food aid, clothing and blankets for the displaced, but despite its work, services remain below the required level, where most of the displaced people work in the city for low wages, and some of them waiting for help from their relatives in Syria or abroad. Who burned the camp?

It was reported reprisals against the displaced people in Karnak camp, after a series of bombings hit Tartous and Jablah (Syrian Coast), on Monday.

Um Mahmoud, displaced in the camp, asserts that after the blasts, several young men in civilian clothes broke into the camp, and they were taking orders from someone, seems to be their commander.

She added: "They seem to be organized, their leader stood apart and began issuing orders to inspect and evacuate the tents, and the soldiers start looting all anything comes under their hands, even the silver and gold rings worn by women, and then their commander ordered to begin burning the tents."

According to Um Mahmoud, military security patrol arrived after the fire, " a Quarrel took place between the patrol leader and the leader of the group came first to the camp, who identified himself as the commander of a patrol affiliated with “The Tiger” forces, but ended up with the withdrawal of Tiger elements after burning three tents”.

"Sahabat forces", Who are they? Rozana researched in Tartous, and it turns out a group of "thugs" from an area called “Kheribat” near Karnak camp, and loyal to the forces of Sohail Hassan (The Tiger), where they joined his forces collectively under the leadership of a person named Ali Muhanna, and shared in most of their battles.

People of Tartus interacted with the attack on the camp of Karnak, on social media and on the ground, where the activists and dignitaries denounced what happened and issued several statements and statements to the elders of the Alawite sect condemns these acts, and the statements have been published on Facebook.

The Governor of Tartous “Safwan Abu Sadi” declared that these acts are considered scandalous, and an activist in one of the associations of psychological support for displaced people, said: “many activists and people gathered around all camps in Tartous, we guarded the camp all the night to ensure the safety of our people and our guests, from anyone wants to destruct the civil coexistence in the city of Tartous."