Victims of Aerial Bombardments on a Civil Defense Building in Aleppo! 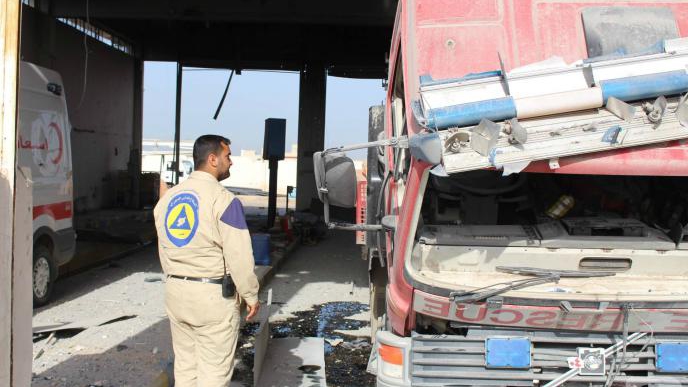 A number of the civil defense personnel have died as a result of raids by an aviation was believed to be Russian, on a building affiliated with the Civil Defense in the town of “Atareb” in Aleppo countryside, also the neighborhoods in the city of Aleppo was hit, what resulted in many injuries.

Local sources said that "warplanes launched, Monday night, five raids on the Civil Defense building in al-Atareb, also the town was targeted by two land-surface rockets, which caused 5 dead in the ranks of the civil defense and injuring others, including serious cases. Munir Mustafa, the Director of Civil Defense in Aleppo, said that the target was by the Russian aviation with four raids, saying that one of the strikes, done by a ballistic missile, loaded with cluster bombs which are internationally prohibited.

This is not the first time when the Civil Defense Center is being targeting, where it was hit twice directly before, and its headquarters were transferred from the heart of the city, to its edges. In the new targeted building. Mohamed, who lives near the center, confirmed that those who were killed in the shelling, were members of the civil defense, and civilians not militants, saying: "The center was hit by the Russian aviation”.

The Civil Defense Center was opened in al-Atareb in the beginnings of 2013, with the individual efforts of the civil defense members who were v from the Syrian regime institutions, led by the officer "Ali Obaid," and then was the expansion of the center and the participation in creating the Free Civil Defense, in the city of Aleppo and its countryside, and it became affiliated with a unified management. Also the members in the Civil Defense Center have joined many courses in Turkey, and the number of employees in the center are currently 40 members, followed by the center itself, several small headquarters in the countryside in western Aleppo.

After this first target to the new building of the Civil Defense in al-Atareb, those who support it confirm that it become completely out of service after the bombing.