Allan's father to Rozana: my son is a symbol of Syrian suffering 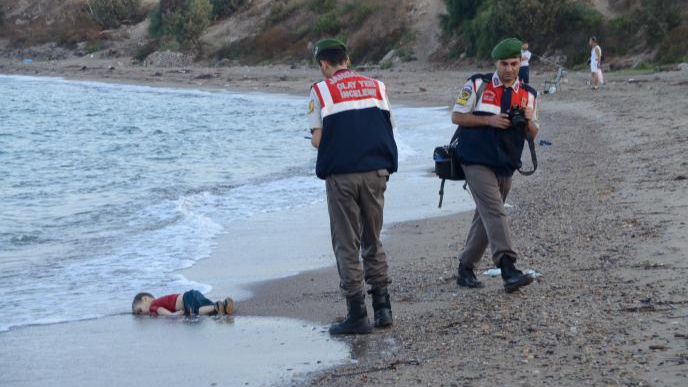 Abdullah is a Syrian men’s barber, who has Kurdish origins, and a father of two boys, Ghaleb 4 years and Allan 2 years said with chocking voice:” I wanted a better life for my wife and two children, somewhere far from the enormous disaster going in Syria”.

After a long sigh Abdullah continues: ”I came to Turkey and started working for 50 Liras per day, my sister was helping me to pay the rent; later on I met two smugglers, one Turkish and the other was Syrian, they offered a journey at a cost of 4 thousand euros for me and my wife, and they wanted me to take two thousand euro for my children! .. But I told them I do not have any more money.

We were 12 people on 5 meters long  fishing boat, which flipped over  due to high waves not so far from the beach, the Turkish smuggler jumped of the boat and ran away, I held my wife and my children so tight to the flipped boat, but the waves were too high that my first sun died, I left him so I can try to save the other one….”  Abdullah stops and bursts into tears before carrying on:” my other son died and also his mother”

Abdullah concluded his sad speech by saying:” I am talking to all the world when I say have mercy on Syrian people, help them! The Syrian worker in Turkey takes 25% of the original wages, I wish my little Allan will became a symbol  of Syrian suffering”

Abdullah’s Relative Ahmad said that journey went on 12:00 am ,on the small fishing boat and we received the bad news four hours later.

Boats of death continue to plunge the Syrians Refugees on the Turkish coast, while the European Union still have a confusion caused by fear of receiving  more refugees, on the contrary of the European citizens who are welcoming their new guests warmly!

You can listen to the live broadcast by pressing (here)