Christmas Lights are Faint in Damascus This Year 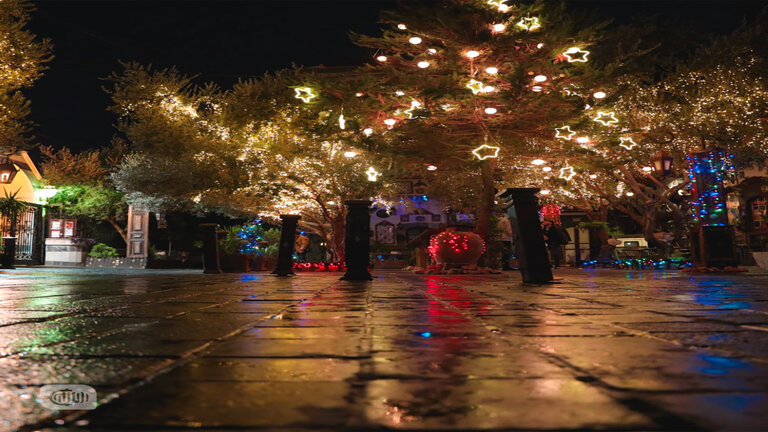 This year's Christmas decorations are quite faint in Damascus. Mid-December is over. Decorations appear shyly. If you visited Damascus in December beforehand, you would definitely notice the difference.


The balconies are no longer decorated. Arrival from the west of Damascus, through the first entrance of the capital from the Mazzeh highway side will not find the trees illuminated, as its shadows used to slip out from behind the “Jalala”, as it is called in Damascus dialect.

This darkness is only cut by the Christmas tree of the businessman "Abu Ali Khader". It stands in the middle of the highway in front of the telecommunications company owned by the man of power Abu Ali Khader.

It is a tree that is lit from five o'clock in the afternoon, and it is decorated in orange to match the company's trademark.

The pedestrian continues to wait for more lights to illuminate the street amidst the darkness that prevails in the country during the scarcity of electricity.

There are no lights after that until the pedestrian reaches the road of the old exhibition. The power of the capital once again comes to the fore, where the "Dama Rose" hotel decorated its entrance with precious yellow light cones. 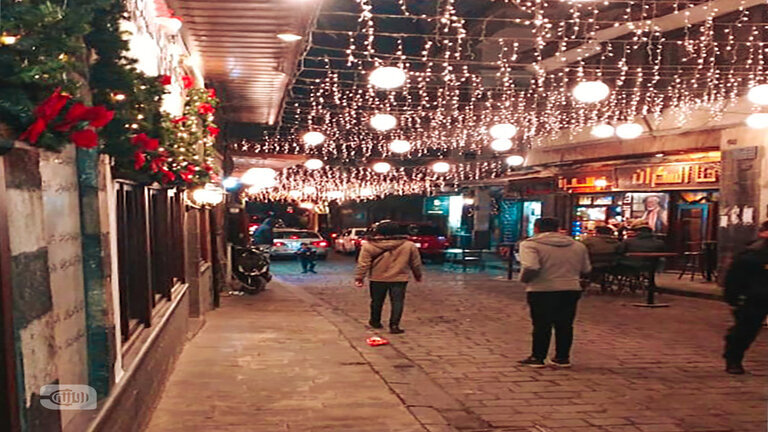 Christmas Atmosphere at the Streets of Damascus - Rozana

Pedestrians think that the cost of lighting these decorations was enough to illuminate their alleys, which have been dark for weeks and days. Darkness reappears to ride along the Pedestrians’ trail until they reach “Bab Sharqi”, spotted with only a timid yellow decoration, and a few trees standing in the bars.

Without Spirit, Without a Sense of Life!

Ali, a 33 years bar investor, comments that bookings for celebrations are few, decorations are very expensive, and that people also live desperately at the minimum level of living cost. He points out that the churches are decorated with modest and scarce decorations.

Ali recalls: "When Bab Sharqi and Bab Touma were both playgrounds and a target for bombing and clashes, the decoration was much better than today. Citizens, especially young men and women, are living in very bad conditions today!

This year Ali did not buy a tree or even new decorations. He followed the principle of " sticking to what is available''. However, he will ask his customers this year to leave their New Year's wish on the tree.

The timid decorations of the churches this year are also dominated by the colour yellow only, starting to light up after five o'clock in the afternoon when darkness falls in the city during the cold gloomy night.

From Bab Tuma to Bab Sharqi, there is no light shining except from the entrance of the Qishleh Garden to the white minaret, so the lights shine brightly there as it gets dark and the music gets louder. 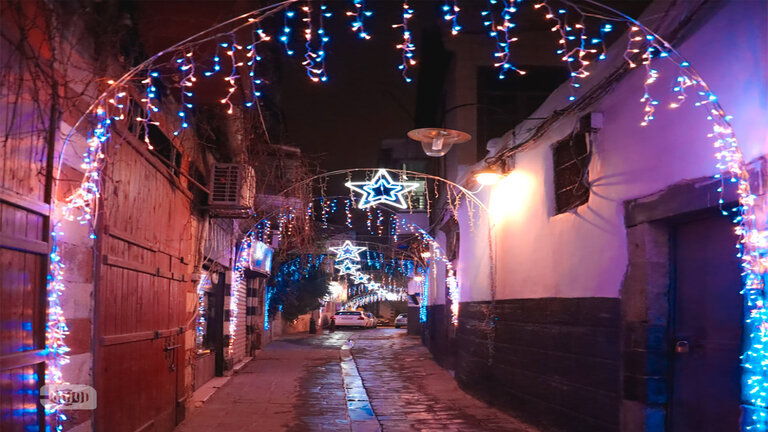 Christmas Atmosphere at the Streets of Damascus - Rozana

Vendors arrange Christmas trees at the entrance of the Al-Asrouniyah market, dusting them off and hanging decorations. Prices are rising Like everything else in the country, unlike electricity, which is declining.

Anyone walking through the Al-Asrouniyah market will notice that the decorations have been adjusted to the current situation of the power supply. There are few lights on the trees, and many of them are covered with white color.

In a related context to this year's gloomy Christmas in Damascus, Maria, 32, who lives in Jdeidet Artouz in the Damascus countryside, says she will not decorate her house. The electricity goes off for five hours and comes back on for an hour very intermittently. She mourned the past, saying, "Once upon a time we decorated the terrace.

Meanwhile "Issa and Noha" just hung the Christmas tree without lighting. They only made a few simple decorations, since their main lighting priority is for the battery, which continues to run when the electricity is cut off, which is five hours compared to one hour of power in Damascus.

According to tradition, the tree with the light is the symbol of new life, as Khaled, the owner of the tree and ornament shop, said, but is there a real emergence of light and hope in the midst of this darkness? And when will this hard struggle that Syrians are going through end? This is how Syrians welcome the year 2022 with a Christmas without decorations, without joy bells, without sufficient lighting for the Grotto of Jesus.