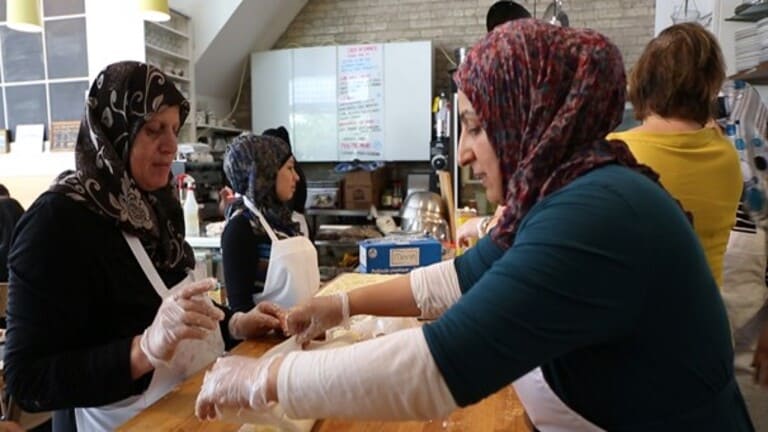 “Work is better than asking others for help. My work is my right and I do not allow anyone to take it from me after I obtained my dignity through it,” Salwa says to “Rozana,” a mother of five children and a widow.


The conditions of Syrian women have changed due to the war and the deterioration of the economic situation dramatically, which prompted many women to engage in various professions, including jobs that were the preserve of men only, thus breaking the stereotype.

For many women, work constituted a lifeline, thanks to which they overcame the deteriorating living situation, inside or outside Syria, while others worked in search of themselves.

Salwa, 44, was displaced from the village of Maarat Hurmah, south of Idlib, after her husband died due to the bombing in 2011. She started working for the first time about two years ago as an assistant dentist in the city of Al-Dana, north of Idlib, to support her children.

During the previous years, before her work, she had been living on aid from the people of the area and organizations. Salwa told Rozana: "I was suffocating because I was unable to do anything for my children. I hated the feeling of people giving me donations, which prompted me to ask about a job to make a living from."

“It is my right to work,” Salwa confirms, who has always heard criticism from her family who reject her work. She added: “I do not care about criticism. Work has given me the strength to overcome life’s difficulties and gave me psychological comfort.”

Many Syrian regions, such as Idlib, prevent women from working as part of customs and traditions or from a religious standpoint, so that the man is the only breadwinner for the family.

Work is one of the rights of women according to international laws that equate both sexes (men and women).

According to the document of international human rights law under the Universal Declaration of Human Rights, adopted by the United Nations General Assembly in December 1948, “All human beings are born free and equal in dignity and rights. Everyone is entitled to all the rights and freedoms set forth in this Declaration, without distinction of any kind, such as race, colour, sex, language, religion, political or other opinion, national or social origin, property, birth or other status," according to the United Nations.

Abu Muhammad, 55 years old, residing in Damascus, told "Rozana": "For 25 years, my wife has been working with me. We worked hard together and built two houses. It was not possible for me to build them without her help, and it was difficult for me to secure the basics of life on my own."

Riad, 42, from Aleppo, told Rozana: "Women's work will definitely affect the home and the children. Who will raise the children if we both work together? Who will take care of them? I don't like women's work."

Nobody is permanent for me

Alana, a 28-year-old resident of Istanbul, Turkey, her husband reluctantly agreed to her work.

"My husband and my only six-year-old son, they are my life in exile, but that is not enough for me, they will not last for me, as I am tired of being a housewife, I felt that my work and my experience is what makes me feel my value, so I decided to start working."

Alana learned and mastered the Turkish language, and continued her studies of the English language, during the first three years of her marriage, after which she decided to work as a translator.

In the Arab world, and in Syria, women bear great burdens at home while taking care of children, which prevents them from participating in social and cultural life. So they stay away from many occasions, captive of their home, to meet the family’s needs of cooking, ironing and cleaning, and interest in children’s studies, activities and education. This is what the United Nations sees as unfair, as this responsibility must be collective.

The independent UN expert, Magdalena Sepúlveda, emphasized that cooking, cleaning and caring for children and the elderly should be a social and collective responsibility, rather than bearing the brunt of it for women, and warned that unpaid care reinforces poverty and social exclusion of women, in a 2013 United Nations report.

"I worked as a translator from Arabic and English into Turkish and vice versa in a beauty hospital for four years, and now I deal with foreign tourists only because Istanbul is a tourist city, after I developed my communication skills and abilities," says Alana.

“During those years my life changed, I supported my family and supported myself in the first place,” Alana continues.

The story of Asmaa, 30, is similar to Alana's determination to work for herself.

Asmaa, a history teacher from Aleppo, was prevented by her family from working while studying at university because of societal customs and traditions, but her marriage was a turning point in her life, through which she shaped her decision to work and build herself.

She told "Rozana", "I got married during the war, and I had to work first to achieve myself and feel myself as an active person within the family, and in support of my husband, during our refugee trip to Lebanon and then Turkey, where we are currently settling."

The business varied between education and accounting and working in shops as a saleswoman. The work became a part of me and every time I gained new skills, Asmaa says.

Covid-19 as a strong motive

Since the outbreak of the Covid-19 and the spread of mutants from it, many Syrian women have lost the breadwinner of their families. Most of their lives have changed and they have found themselves alone facing the battle of life. Therefore, they have become mainly responsible for providing for their children and families.

Umm Alaa, 37, a resident of the Turkish city of Gaziantep, is now looking for a job to support her four children after her husband died a month ago from the "Covid-19" disease.

“A month and a half ago, my husband was infected with Covid-19, two weeks passed by us like a dream, then the disease snatched him from us. I have to control myself to be able to support my children, away from any help,” added Umm Alaa.

States, international organizations, and civil society have a responsibility to protect women's rights to work, political participation, freedom of choice, safety and security, health care, and education, according to the United Nations.

According to Article (11) of the “Convention on the Elimination of All Forms of Discrimination against Women” for the year 1979, to which Syria is a signatory, states parties must take all appropriate measures to eliminate discrimination against women in the field of work in order to guarantee them, on the basis of equality, between men and women, the same rights, in particular “the right to work as an inalienable right of all human beings”.