A small Cup of Water Angers the Syrians: "Your Cup my Homeland" 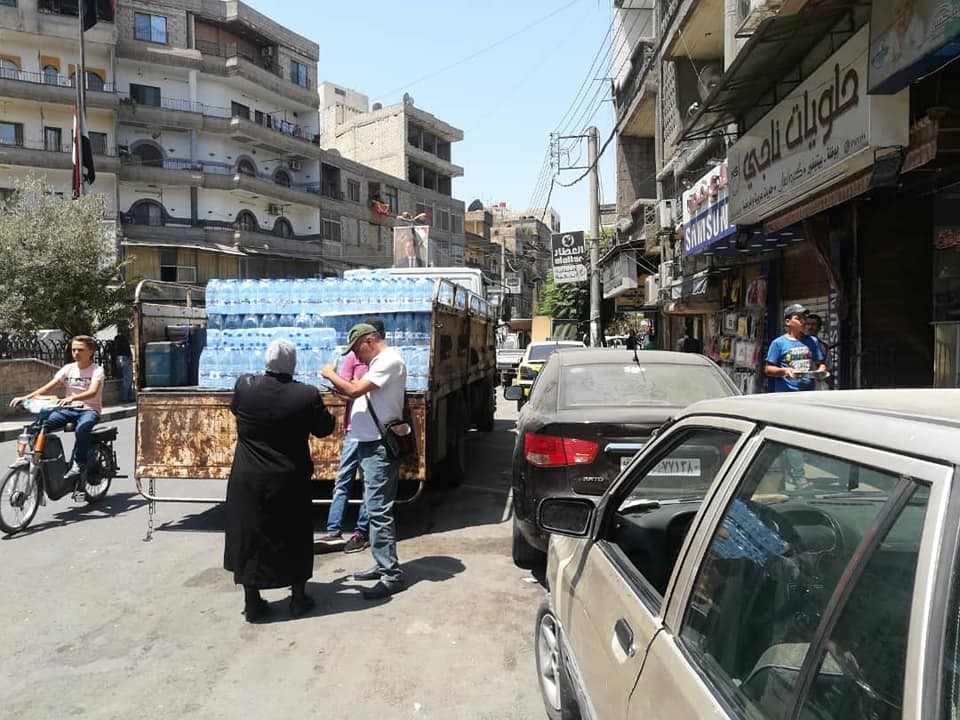 With the continued rationing of electricity in the areas controlled by the Syrian regime and the urgent need for drinking water, due to its interruption in conjunction with the power outage, small cups of water began to spread in the markets, at a price of about 200 Syrian pounds, which angered the Syrians, who considered that there is nothing left to ration but the air.


The Business-to-business (B2B) website stated that small cups of Ain Al-Fijah water are sold in the market at a price of 190 Syrian pounds per cup. The General Organization for Food Industries was quoted as saying that it "produces water packages in the form of cups, which is an old production line that has been put on the market."

The organization stated that the presence of cups was not noticeable in the markets due to the lack of demand, but following the increase of demand for water, these cups were commercialized at a price of 190 Syrian pounds per cup.

The General Company for Bottling Water told the Syrian Arab News Agency (SANA) that "the production line of water cups has been in operation for about 10 years and has been providing a number of airlines with this product, which they provide on board their planes with meals for passengers,” adding that production surplus has been commercialized in the market.

The company indicated that with the ongoing surge in demand, the product volume was changed from 125 ml to 250 ml and sold to agents, restaurants, and cafes to meet the needs of the market, pointing out that the official price of the cup is fixed at 160 Syrian pounds for the consumer, and everything else is the responsibility of the ration control authority.

The spread of these cups in the markets angered the Syrians, who expressed their dissatisfaction with the deteriorating living situation in the country.

Reem Omrani, an activist on Facebook, commented: "There is nothing left but air to sell us," while Ranim Maarouf wondered whether they will be selling bread loafs in single pieces.

As for Ghaith Ahmed, he wrote sarcastically: “The first step for us to become like Dubai,” while Umm Muhannad called on the Syrians to wait to distil the water, saying: “You will be getting water through the dropper too, wait and see.”

Many citizens confirmed that the water cups are distributed free of charge to the needy in other countries such as Saudi Arabia and the UAE.

Atef Sharif mocked the prices saying: "There is no doubt that the pricing is well-studied and suits the individual income in our country, your cup my homeland!"

Moreover, social media platforms had previously been buzzing (last June), after launching an envelope of olive oil in the market, weighing 20 grams for 300 Syrian pounds, while the price of a litre of olive oil amounted to 13,800 pounds, and 15,000 pounds per kilo, at a time when Syria was among one of leading olive oil producers.

Syrians are suffering from the deteriorating living situation due to the collapse of Syrian pound and its impact on prices, in light of accumulated service crises such as water and electricity shortages and the lack of fuel supplies, which has pushed most Syrians (about 90 percent) to the brink of poverty, according to UN reports.

No water, no electricity

Hichem (a pseudonym), who is a young man in his thirties residing in the city of Damascus, told Rozana that the problem of electricity outages has affected the process of pumping water in many areas.

He continued: "If the electricity intensity was convenient, no one would need to purchase water,’ noting that “electricity has been cut off for four hours on a daily basis compared to two hours in Damascus, while water sometimes reaches homes for two hours only, and other times it may be cut off for two days.”

Basma (a pseudonym), who is a resident of the city of Al-Kiswah in the countryside of Damascus, explained to Rozana that “electricity is cut off in our areas for up to 12 hours for an hour of continuous supply, and with the electricity outages, the water supply would be disrupted too, as most of the roofs tanks need a water pump and electricity to be filled."

She explained: "We buy water for our use and water to drink, except for ice sticks, and they all cost about 200,000 Syrian pounds per month, while highlighting that "people are totally broke and water has became a second source of expenses. As for me, I buy a 220-litre barrel of water for 1,500 Syrian pounds, and I need 15 barrels a week.”

“Whoever has water well or his neighbour does is truly blessed,” says Basma.

Last March, the General Company for Bottling Water almost doubled the prices of water bottles, and reset the price of a litre and a half bottle at 525 Syrian pounds, a half-litre bottle at 350 pounds, and a 10-litre bottle at 1,575 pounds.

13 aid organisations warned in a statement, issued two days ago, that more than 12 million people in Syria and Iraq are threatened with losing water, food and electricity sources, as a result of high temperatures, low levels of rainfall and drought across the region, which would deprive people of drinking water and agriculture.

The statement also explained that the rising temperatures caused by climate change increase the risk and severity of drought, according to the British newspaper The Independent.