School Supplies … a Nightmare that Haunts the Syrians 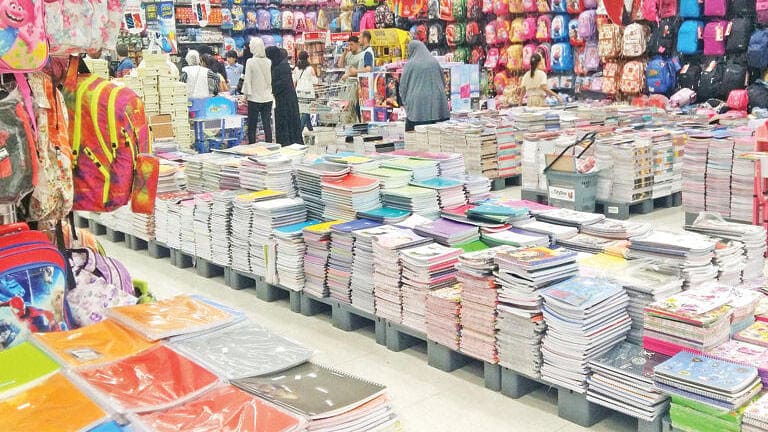 School uniforms and stationery are essential requirements for starting the next school year, and although education is free in Syria, securing these materials has become a burden for Syrians, in light of the high cost of living and widespread poverty among most citizens.


Hind, an employee in Hama and a mother of four children, all of whom are enrolled in schools, told Rozana that “the needs of each child, including a school uniform, a pair of shoes, a school bag, and stationery cost more than 100,000 Syrian pounds.”

She added that "the school uniform costs 50,000 Syrian pounds, the shoes cost 30,000, the school bag cost 30,000, and stationery is bought for 25,000 pounds. My salary and my husband's wage are not enough to buy all these supplies at these prices, so I am planning to get a loan in order to pay the expenses of school supplies."

Hind pointed out that a number of displaced people in the area where she lives decided not to enrol their children in school because they cannot afford school supplies.

Zaher, a young man residing in the Damascus countryside, who has two sons, works in a shop in the market for a salary of about 100,000 Syrian pounds. He told Rozana that “school fees are very high, as stationery alone costs 35,000 Syrian pounds for two children, without mentioning the school uniform, bag, and shoes.”

He added that sometimes, in order to reduce the burden and the aforementioned costs, brothers help each other and swap their children’s clothes so that they would not have to buy new items, which are expensive.

On Thursday, the Syrian Trade Establishment (STE) issued instructions according to which it allowed the sale of stationery and school uniforms in instalments for government employees, as the new school year approaches (begins on 5 September), according to the Council of Ministers’ website.

The STE explained that the beneficiaries of the instalments plan are permanent government workers and those working with annual contracts that have not expired during the instalment period, while indicating that the instalment ceiling is 200,000 Syrian pounds for each worker without interest, provided that the amount is paid within 12 months starting from the month following the receipt of the supplies.

The STE decision angered many Syrians who expressed their dissatisfaction via social media platforms, in light of high prices and the inability to make a decent living, especially for unemployed people who do not earn sufficient income.

Abir Ahmed, a social media activist, wrote: "Sorry for the comment, but the citizens who do not have an income or a salary, what would they possibly tell their children?"

Alaa Khatoun criticized the STE, saying: "As an institution, how could you not be ashamed to give a stationery loan worth three salaries."

As for Sam Al-Baher, he confirmed that education has become burdensome to the Syrian family due to the surge in stationery cost to more than 100,000 Syrian pounds, in addition to the students’ personal expenses and transportation fees.

The Ministry of Education in the government of the regime announced that the school year 2021-2022 will start on 5 September in all schools, while administrators and teachers will resume their jobs starting from 29 August.

In mid-July, the Syrian regime government approved an increase in the salaries of government employees by 50 percent, preceded by raising the prices of fuel and basic commodities such as bread, sugar, and rice. Hence, the authorities decided to increase the price of diesel by 172 percent, the price of bread by 100 percent, and the price of sugar and rice by almost 100 percent.

Many Syrians questioned the point of raising salaries at a time when this raise does not match the prices in the markets, as the employee's monthly salary hardly secures the expenses of the first week of the month for a small family.

On the other hand, many citizens depend on the funds transferred by their relatives who live abroad; otherwise poverty would have affected 90 percent of the Syrian people, according to UN reports.