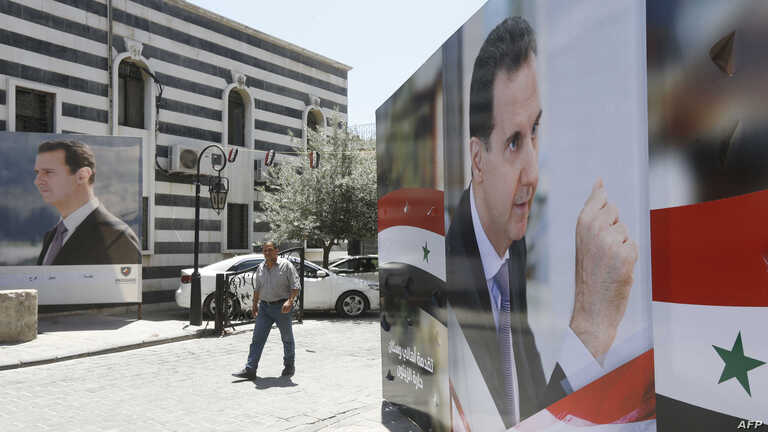 One day before the "presidential elections" that the Syrian regime intends to hold, the electoral campaigns will stop with all its events and activities in support of Al-Assad, which Syrians have been used to seeing during the elections period, in what is technically known as the pre-election silence.

The events held in support of Al-Assad exposed the abuse of power practiced by the president and his aides, as the institutions of the Syrian state did not hesitate to express its full support for Al-Assad, which is considered as a clear violation of the supposed neutrality of official bodies and the need to maintain distance from any declared position of presidential candidates.
Judiciary personnel, sports institutions, ministries, along with affiliated directorates, and many government institutions, as well as unions and a large number of artists, athletes and celebrities have all participated activities to support Al-Assad during his election campaign, which he labelled "Al-Amal bil Amal” (Hope flourishes with work).
This comprehensive support campaign was not limited to state institutions, which are not supposed to exhibit any kind of support towards any candidate. As such, the security forces and the army that Al-Assad leads as the Commander in Chief of Armed Forces also committed instances of power abuse by declaring support for the regime leader, which never happens in democratic countries governed by republican systems.; in addition to the fact that Al-Assad is still the head of the National Progressive Front (the framework of partisan and political life in Syria), knowing that the Arab Socialist Ba’ath Party is still leading the state and the civil society, despite removing a clause in the previous constitution that explicitly says so.
Given the fact that Al-Assad is the army’s commander-in-chief, it is very likely that his senior officers will order their soldiers and officers to vote for the president, which was proven through a number of videos that have been circulated on social media platforms showing the army’s support for Al-Assad during the election campaign, which means that military votes  will certainly go to Al-Assad.
According to the Syrian constitution in force by the regime, the President of the Republic is the commander-in-chief of the army, who controls and exerts his authority and influence over military operations.
However, according to the amended Syrian General Election Law, in 2014, the participation of the military in the presidential elections is allowed, but remains prohibited in legislative and local elections.
Ministries supporting Al-Assad
The support campaigns launched by state institutions, including the army and the various ministries, and affiliated and directorates suggest that the current presidential elections are a formality that will end by Al-Assad’s victory, which will enable him to remain in power for the next seven years.
Many institutions have organised or participated in events, and some of them have declared their support for Bashar Al-Assad. The General Sports Federation (the highest sports authority in Syria) has announced backing the head of the regime, along with the rest of the sports federations affiliated to it. The Syrian Football Federation's Facebook account posted a photo showing a slogan backing Bashar Al-Assad "The Athletes are with you" with its campaign slogan "Al-Amal bil Amal” (Hope flourishes with work).
Meanwhile, the Aleppo Health Directorate announced on its official Facebook its participation and support for Al-Assad's campaign at one of the election events in Aleppo.
The Tartus Transport Directorate announced its support for Al-Assad by publishing a Facebook post stating that "as part of efforts to support the President Dr. Bashar Al-Assad in his election campaign, the cadres of the Tartus Transport Directorate announce their participation and pledge loyalty and devotion to His Eminence, raising the slogan ‘Al-Amal bil Amal’.”
The Latakia Endowments Directorate showed its support for Al-Assad by publishing his campaign slogan, in addition to circulating a video showing the head of the regime speaking to clerics at the Umayyad Mosque in Damascus on a previous occasion.
The support for Al-Assad has not changed either during or before the emergence of social media platforms. Banners and images with supporting slogans for the Syrian president have invaded the walls of ministries, directorates and the surrounding areas in various Syrian governorates. These state institutions, which seem to be taking orders from the regime, are clearly violating the law, in an overt case of power abuse.
The “presidential elections”, which the regime insists on holding in spite of the lack of international recognition, will be held on 26 May, with the participation of two candidates (Abdullah Salloum Abdullah and Mahmoud Marai) who will compete with Bashar Al-Assad for the assuming power for the next seven years.