How did Assad Make it up for his Rivals Following 2014 Presidential Elections? 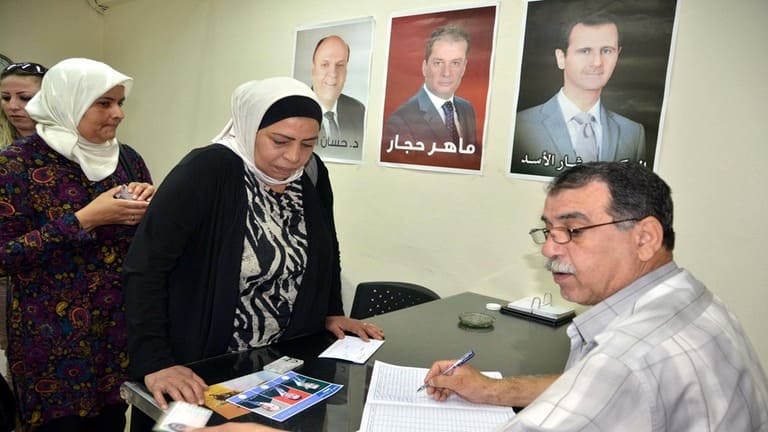 The 2014 presidential elections set a precedent in the history of Syria when three candidates ran for President of the Republic’s office after nearly forty years of Al-Assad’s family rule, the father and the son.

Hafez Al-Assad, who remained in office for 29 years, used to renew his terms through the principle of pledging allegiance, in the absence of any rivals who could compete with him.

After his father’s death, Bashar Al-Assad came to power in 2000 without any contestants facing him, and renewed his presidential mandate according to the same method in 2007. He won both elections with 99.7 percent and 97.6 percent, respectively, by means of undisputed referendums on his leadership.

In 2014, 24 Syrians applied to the Supreme Constitutional Court for candidacy, but only two of them managed to compete with Bashar Al-Assad, namely Hassan Al-Nouri and Maher Hajjar. So what was the fate of each of them after the elections, and how did Al-Assad compensate them?

After Hassan al-Nouri lost in the 2014 elections against Bashar Al-Assad in, the head of the regime issued Legislative Decree No.39 stipulating the establishment of the Ministry of Administrative Development, which entered into force on 27 August, 2014, according to the website of the Ministerial Council’s Presidency.

Bashar Al-Assad won 88.7 percent of the votes, according to what Parliament Speaker Mohammad Al-Laham announced in June 2014, while Al-Nouri got 4.3 percent only.

Al-Nouri assumed the position of Minister of State for Administrative Development between 2000 and 2002 during the term of Mustafa Miro's first government, which was formed in March 2000 at the beginning of Bashar Al-Assad’s era.

The ministry was soon canceled with the formation of the government of Muhammad Naji Al-Otari (2003-2011), after which Al-Nouri disappeared along with his ministry until he re-emerged as a presidential candidate against Al-Assad in 2014.

Between 1998 and 2003, Al-Nouri was a member of the People's Assembly, in addition to holding the position of a secretary at the Damascus Chamber of Industry between 1997 and 2000.

What about Maher Hajjar?

Maher Hajjar ran for the presidency of the Syrian Republic in April 2014, and was the first candidate to participate in the presidential race with formal approval from the Supreme Constitutional Court. At the end of the elections Hajjar won 3.2 percent of the votes.

After the elections, Bashar Al-Assad met with Hajjar on 10 June of the same year, according to the Syrian Presidency Twitter account.

In 2016, news spread about the death of Hajjar in Damascus after contracting swine flu. However he appeared again during a phone interview with Al-Khabar TV in January 2016 and denied rumours about his death.

Since then, there has been no information or news about Hajjar either on TV or on social media platforms.

Hajjar was a member of the Syrian People's Assembly during the 2012 parliamentary term. He was born in the Governorate of Aleppo in 1968, holds a postgraduate linguistic studies diploma from the Faculty of Arts and Humanities at the University of Aleppo, joined the Syrian Communist Party (SCP) in 1984, and then worked as a secretary in the party’s office in Aleppo.

He left the SCP in 2000, and formed in 2003 the National Committee for the Unity of the Syrian Communists (NCUSC). In 2007, he participated in the legislative elections presenting Aleppo governorate, but failed to secure a seat in Parliament.

In 2012, he ran again for the People's Assembly elections in the list of the Popular Front for Change and Liberation and won second place among the independent votes.