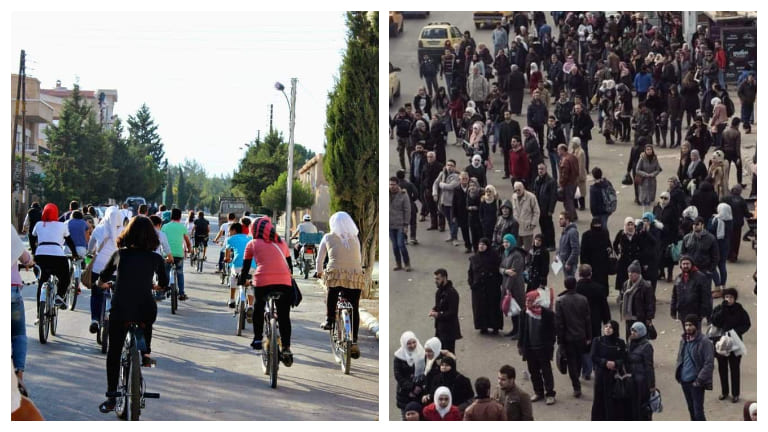 With each crisis, Syrians keep finding innovative ways to adapt and overcome the regime's government failure to provide basic resources for the citizens, amid the suffocating conditions in the country.

The aggravation of the fuel crisis has forced some Syrians to use alternative means of transportation, which they were not used to before.

Syrians are experiencing an overwhelming transport crisis due to the recent reduction in fuel allocations, especially after the disruption of shipping traffic in the Suez Canal last week, which caused delays for a large number of employees, students and workers to reach their destinations,  in addition to being forced to wait for means of transportation like share taxis, buses or cabs that charge high fees too.

Take me on your way

The "take me on your way" initiative that has been organized  last was re-launched under the request of  the Syrians who feel burdened by the new fuel crisis.

The initiative encourages people who own public or private means of transportation to transport as students, employees or patients on their way.

Walking may be the only option left for those who are unable to get to work or anywhere. Dozens of people in the streets of Damascus have chosen to walk out of necessity due to the ongoing fuel crisis.

Hazem (a pseudonym), 29, a young man working in the Salhiya market in Damascus, told Rozana: "Many workers I know in the market come to work on foot and also walk back home... Some of them live nearby, so it does not affect their health, while the others get tired due to the long distance from work to home. "

The page Khawatir Abo Bakri posted on Tuesday, mocking daily life without transportation: “You walk back home from work, because of the gas, diesel and transportation crisis, carrying groceries, so your muscles must have been working too! If you have the gift of balance, you can put the bread bundle on your head and keep on walking, even your facial muscles work due to the angry reactions you make when you see the rocketing prices.”

Ru'aa Al-Tunji, a social media activist, said that she lost five kilos due to the fuel crisis, especially that she needs to leave home four days a week to pick up commodities. On the other hand, Ahmed spends about six hours a day walking in Damascus.

The Suzuki trucks, which the Syrians used in the past to transport goods, have now become a life saving vehicle. Student Facebook pages shared a photo of a group of people riding a Suzuki truck, with a comment under it: "When means of transportation are unavailable, a Suzuki can save the day.”

Ajil News stated that the photo was taken to university students from the Baramkeh area who travelled in a Suzuki for 200 Syrian pounds instead of paying 3000 pounds for a cab.

These days, anyone who owns a bicycle is considered as fortunate. Some university students suggested creating groups on social media platforms for people who own bicycles to meet and go together to their universities, despite the fact that the streets of Damascus do not have bike lanes.

Mohamed, who proposed the idea, received the support of other students. He posted: ”If the idea becomes widely spread, we can create a group to agree on how to go to our universities together. The drive from Qudsaya to Baramkeh took me about 45 minutes, depending on the speed, but to be honest, Iwas exhausted."

Did the transportation sector solve the problem?

A member of the executive office for the public transport sector in Damascus governorate, Mazen Dabbas, told El-Khabar yesterday, Tuesday, that in order to cover the shortage of public means of transportation, share taxis were allowed to take up on a number of lines in the city.

Dabbas added that the General Company for Internal Transport in Damascus worked to cover all the transport lines by increasing the number of internal transport buses, as 32 buses were allocated to transport citizens from the President’s Bridge to their areas of residence. But the main problem is how to secure fuel, as stated by the Ministry of Oil and Mineral Reserves a few days ago.

On 27 March, the Ministry of Oil and Mineral Resources of the Syrian regime announced that it would rationalize the distribution of the available quantities of oil derivatives (diesel - gasoline) to ensure their availability for the longest time possible following  the traffic jam in the Suez Canal caused by the deviation of a giant cargo ship, which took its toll on oil supplies heading to Syria.

On 26 March, the executive office for the hydrocarbons sector decided to reduce gasoline and diesel allocations dedicated to the governorates of Hama and Damascus.

Sham FM quoted Dabbas as saying that the Damascus’s daily allocations of gasoline will be reduced from 48 to 41 orders, while the daily supplies of diesel fuel will be cut from 18 to 14 orders. Hence, distribution priority will be given to hospitals, public facilities, and transportation.

The Executive Office of the Damascus Governorate Council approved in a session held yesterday, Tuesday, the amendment of the share taxi fare in the governorate.

He indicated that passengers must now pay double the fee shown on the taximeter screen until the meters are modified by the Damascus branch of General Company for Electrical and Communication Works (Syrianet).

The local newspaper Al-Watan quoted the Syrian official as saying that the decision to adjust the share taxis fare came after the change in gasoline prices and the increase in maintenance fees, adding that the new fare was fixed in a way that enables the share taxis’ owners to work and provide adequate services to citizens.

In the middle of this month, the Ministry of Internal Trade and Consumer Protection of the regime’s government raised the prices of gasoline (octane 90 and octane 95) and domestic and industrial gas.