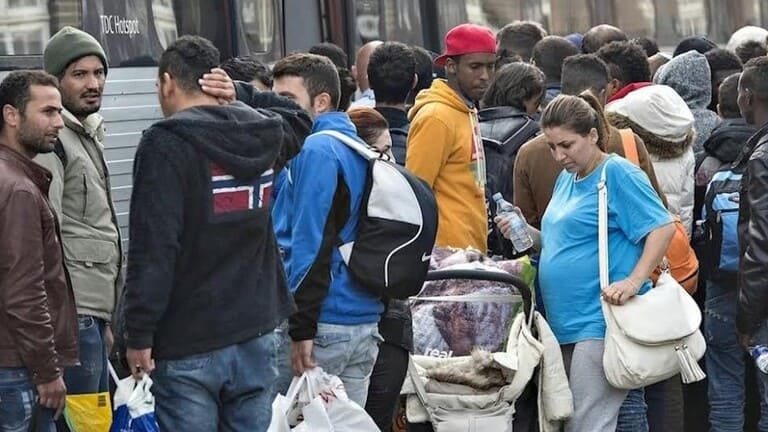 The Danish government expelled Syrian refugees under the pretext that the capital Damascus is safe now for their return, and considered that the cessation of military operations in the area is a guarantor for the refugees’ safety, while ignoring the ongoing security crackdown and the collapse of the economic situation in Syria.


Samar (40), who has a residence card as a refugee with humanitarian protection for six years now, checks her letterbox and her husband's more than ten times a day, and since the last interview last October with the Danish immigration department, she has been anticipating the horror of receiving the deportation.

The Danish government has decided that Damascus is a safe city that the refugees can return to in the absence of risks that might endanger their lives, according to the authorities’ assessment.

Mohammad Hamdan, 38, a resident of Denmark who has been granted political asylum, told Rozana: “Since my sister and her husband were interviewed, they have been waiting for the immigration department’s decision to renew or cancel their residence permits. They are psychologically devastated, and all families like them are living in a state of constant anxiety and tension for fear of facing an unknown future.”

Hamdan added: "I know many who have been stripped of their residence permits by the Danish government, while others are still waiting for an answer from the immigration department."

He continues: "Denying the Syrians their residence permits means ruining their lives and preventing them from working and learning, which may force many of them to decide to return voluntarily to Syria."

Hamdan describes the re-evaluation interview as an investigative session “with great psychological pressures exerted on the refugees, as their answers must match the statements they made during the first interview they went through since years and allowed them to obtain the residence permit. They are required to provide convincing answers, proved by evidence, which the majority cannot do; and consequently, many were denied the renewal of their residence permits."

I will never go back to Syria

Rihab Kassem, 65, from the Yarmouk camp, has been granted humanitarian residence permit in Denmark since 2014. She was informed late last year that her residence authorisation was revoked, and she is now awaiting the final rejection of her renewal demand.

Kassem told Rozana: "the Danish immigration department informed me of the decision to withdraw my residence permit although I informed them during the evaluation interview in November 2020 that I left the Yarmouk camp due to the bombing and destruction, and because of security problems with the Syrian regime, which prevents us from returning to Syria."

She added: "I will never go back to Syria. We even fear to write a comment on Facebook (regarding the situation in Syria) so how would you expect us to go back to Syria. However, I am thinking about joining my daughter in Germany."

Kassem pointed out that her 73-year-old friend also informed her of revoking her residence permit too, along with many others.

Refugee protection is granted as long as it is needed

The Independent reported on Wednesday that Denmark has stripped about 100 Syrian refugees of their residence permits and required them to return to their homes, because “Damascus is safe now to return to,” to be the first European country to withdraw residency permits from Syrian refugees.

Danish Minister for Immigration and Integration Mattias Tesfaye announced the withdrawal of the residency of 94 Syrian refugees. He said last month, according to the newspaper, that his country was "open and honest from the beginning" about the situation in Syria, adding: "We have made it clear to the Syrian refugees that their residence permits are temporary and it can be withdrawn if protection is no longer needed. "

Tesfaye pointed out that Denmark "will give people protection as long as it is needed and when conditions improve in the refugee's country, he/she must return to his/her homeland and start a life there."

This comes at a time when the Danish immigration department decided to expand the areas it considers safe in Syria to include the Rif Dimashq governorate (Damascus countryside).

The newspaper reported that the temporary protection permits of about 900 Syrian refugees from Damascus were reassessed last year, and now the same may apply to 350 other refugees from Rif Dimashq living in Denmark.

In protest against the decision, Amnesty International told the newspaper that the decision was "a horrific and reckless violation of Denmark's duty to provide asylum."

Refugee and Migrant Rights Programme Director at Amnesty International UK, Steve Valdez Symonds, said that "Denmark's endeavour to return people to the hands of the Syrian regime is a terrible affront to refugee law and the right of people to be protected from persecution."

Symonds criticized Denmark's decision to withdraw the residence permits and believed that this might drive other countries to abandon their obligations towards Syrian refugees.

Hamdan (married with three children) asserted: "I was granted asylum for political reasons. Currently, my residence permit cannot be reassessed under any law. My life is very much at risk in Syria because I am wanted for reserve military duty and the security forces are looking for me because I participated in demonstrations and activities against the Syrian regime."

"I could not even think of returning to Syria, and if the Danish government decides to re-evaluate my stay, my future will be ruined. As for my children, they have no future in Syria because they cannot speak Arabic very well.”

Hamdan is worried about the future and says: "If the opposition wins the election, our situation may become much worse than it currently is."

Last Sunday, the liberal opposition Venstre Party called for accelerating the process of returning Syrian refugees from Denmark through reaching an agreement with the government of the Syrian regime. The party’s immigration official Mads Folide said that he expects the centre-left government to "go for an agreement under which Syria would return its citizens from Denmark."

Asim Sweid, a member of the Finjan organization in Copenhagen, Denmark, told Rozana: "According to the website of the Danish Immigration Service, residence permits were withdrawn for 170 Syrians last year," while indicating that "most of those who lost their residence authorisations were women who were not politically active in Syria. They have no justification to give to the Refugee Appeals Board when they apply for an interview, which leads to revoking their residence permits."

According to Sweid, withdrawing Syrians’ residence authorisation means that their lives will be completely ruined and leads to depriving them along with their families of the possibility to work and study, which leaves them with three options, which are either to return to live in a refugee camp or apply for a voluntary return to Syria in exchange for $ 30,000 for adults and $ 12,000 for non-adults, or look for another European country to travel to.

He explained that last year a syrian returned to Syria as part of the voluntary return program. However, he was arrested by the security services for 15 days, and then disappeared on New Year's Day, to be found later in the State Security headquarters. Despite being released, he still has to go and sign in the security branches on a regular basis. Most of those whose residence permits were withdrawn left for other countries such as Belgium, France, the Netherlands, and Germany.

Sweid added that people who are able to prove that their lives have been threatened by the Syrian regime before the Refugee Appeals Board can enjoy their lawful right and remain in Denmark, but as for stating the war in Syria as the reason for seeking asylum, it will not be taken into account, as Damascus and a number of other areas have classified as not dangerous according to the assessment of the Danish government.

On the other hand, minister Tesfaye said on 28 June 2020 that the immigration department should start re-evaluating the residence permits granted by Denmark to Syrians coming from Damascus, according to the website of Danish Ministry of Immigration and Integration.

The website stated at the time that conditions in Damascus were no longer dangerous to the point of granting or extending temporary residence permits, and indicated that the Refugee Council had taken a decision that Syrians coming from Damascus do not need protection and had to leave the country.

According to the Danish immigration website, 5,000 Syrians were granted temporary protection status based on the general conditions in Syria between 2015 and 2019.

The UN Independent International Commission of Inquiry on the Syrian Arab Republic (IICI Syria) said in a report issued last Monday that the fate of tens of thousands of forcibly disappeared civilians since 2011 has not been known to date. The Commission believes that many of the missing Syrians have died or been executed, while others are being held under inhumane conditions, pointing out that the detainees are subjected to torture, rape, and murder.