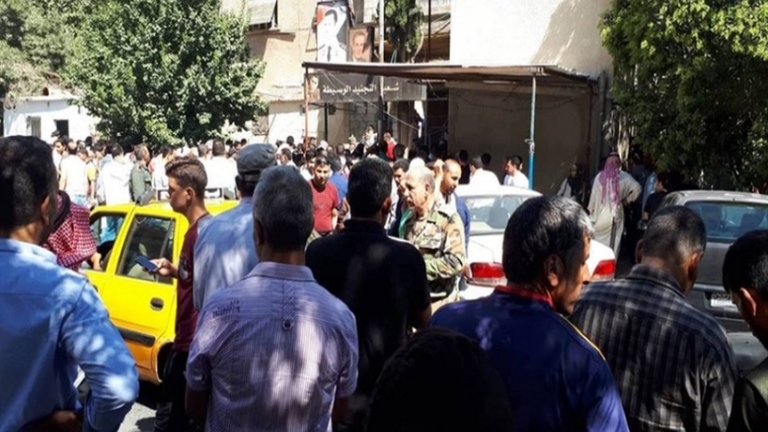 Economy | 16 Feb 2021 | Malek Alhafez
Billions of Syrian pounds will be pumped into the Syrian regime’s treasury in the coming days, once the Ministry of Defence in Damascus starts enforcing the seizure procedures against those who fail to join the military service, in light of the economic collapse facing the Syrian regime, which recently distributed a new currency to alleviate the inflation rates, in conjunction with a new decrease in the exchange rate of the Syrian pound against the US dollar.

The statements issued by head of the allowance and exemption branch in the Syrian regime forces, Brigadier General Elias Bitar, regarding the seizure and sale of the property of family members and the families of the conscripts who fail to pay the military service allowance, are still causing widespread controversy on social media platforms in Syria.

Many social media users mocked Bitar's statement about confiscating the funds and property of everyone who reaches the age of 42, whether he is inside or outside Syria, in the event that he does not perform military service or pay for being exempted, or seizing the property of his family and relatives if he does not own properties.

Considering the exchange rate differences and the Syrian regime’s endeavour to force the Syrians to pay the value of the allowance, the incoming remittances to Damascus with an average value of $8000 at the price of the compulsory service exchange rate will be converted to about 2.4 Syrian pounds (8000 * 2550).

In view of the above figures, the differences between the exchange rates and the value of financial profits that the regime will gain from the exchange rate difference, whether for the dollar of remittances or the compulsory service allowance, are evident. This means that, if 10,000 people accept to pay the allowance, the regime may earn a total of 204 billion Syrian pounds.

Moreover, the compulsory service allowance per person may exceed $8000 and reach $10,000, depending on the different periods of time spent by Syrians outside the country.

The legal aspect of Bitar's statements opens the way to questions about the economic benefits that the regime will achieve as a result of applying the seizure procedures against those who are required to pay the compulsory service allowance.

The Syrian regime will achieve economic gains in light of a collapsing economic situation and its need for funds, if the Syrians living abroad who are assigned to perform military service Syria commit to pay the allowance.

In this regard, economic researcher Younis Al-Karim considered that if Damascus forces citizens to pay the allowance, this would achieve a reasonable support for the government’s treasury with foreign currency, which would help improve its economy, in addition to breaking the siege imposed by European and the US sanctions through receiving remittances.

The Syrian commander’s statement is apparently based on Law No. 39, issued on 24 December 2019, which indicates that the executive seizure shall be applied on movable and immovable funds owned by the conscript who refuses to pay the fee for missing out the military service. However, the law stipulates the confiscation of the property owned by the concerned person in accordance with the provisions of the public tax law, without mentioning the relatives of the conscript, as Bitar claims.

Al-Karim told Rozana that the decision made by some Syrians to pay the allowance because of failing to serve in the army means that they can return to their country, and thus the goal of Damascus and Russia to return refugees to Syria will be fulfilled, which will contribute to covering for Al-Assad and lifting the sanctions imposed on him.

The economic expert continued: "The extreme right and the lobbies supporting Al-Assad in Europe will push their governments to return the refugees who contacted the embassies of the regime to pay the allowance. Hence, the fact that the Syrians are paying the allowance means that they accept the crimes of the regime, which offers support to Al-Assad in the upcoming presidential elections.”

Lawyer Aref Al-Shaal stated that Law No. 39 issued in 2019 amending the Military Service Law stipulates that in this case the seizure procedures shall be imposed only on the conscript’s funds and not withholding the property of any of his relatives or family members, adding that the public tax law did not grant the finance minister the power to seize the funds of persons other than the conscript himself and not his guardians or guarantors, which means that Bitar's statements lack accuracy and legal basis.

Al-Shaal wrote Sunday on Facebook that "law experts believe that the finance minister's decision to seize the funds owned by persons other than the conscript is unconstitutional, as it denies the judiciary its exclusive authority in this regard."

Bitar explained in televised statements that "in the event that the conscripts, who reach the age of 42, exceed the three-month deadline without completing a file of expenses for the compulsory service allowance, the recruitment division will send a summons document to the military judiciary and the military prosecution, and another  file will be addressed to the Ministry of Finance and the  General Authority for Taxes and Fees to enforce the seizure of the property owned by the enlisted person who failed to pay the compulsory service allowance."

He added that "those who paid the allowance, men who are physically unfit, and those who have served for five years in the army of the regime or the security forces, or in the army of a foreign or Arab country, in addition to healthy men who have disabled brothers, and fathers who lost two sons while serving in the regime army, are exempted from the military compulsory service."

Bitar concluded by saying that if a Syrian man leaves the country at the age of 18 and obtains the nationality and passport of another country, he would be also required to pay the compulsory service allowance because he is registered in Syria’s civil register, warning that the concerned persons will be fined in case of any delay in payment.

Bitar's statements coincided with the entry in force in early February of Legislative Decree No. 31 of 2020, issued by the head of the regime, Bashar Al-Assad, regarding the regulations on exemptions and allowances related to the Military Service Law.

Al-Assad issued the decree on 8 November, last year, to include amendments to a number of articles in the Military Service Law, in order to include provisions and fix the value of the compulsory service allowance for those enlisted for compulsory military service classified under the article of fixed service.

On 1 December, 2020, the Central Bank of Syria issued the daily allowances bulletin for the application of amendments to the decree regulating the payment of the compulsory service allowance, including fixed service, whether in Syrian pounds or foreign currencies.

The central bank set the price of a dollar at 2550 Syrian pounds, knowing that the dollar price in the bank's daily bulletins has been fixed for months at 1256 pounds. The decision provoked intense criticism at the time, as people expressed their anger while commenting on the post published by the bank on its Facebook page.

Most of angry social media users said: “when you receive funds, you count the dollar at 1256 Syrian pounds, and when we pay the allowance, you count it at 2550 Syrian pounds,” in addition to others who mentioned that the bank is trading with a different currency other than the Syrian pound "(which is illegal).