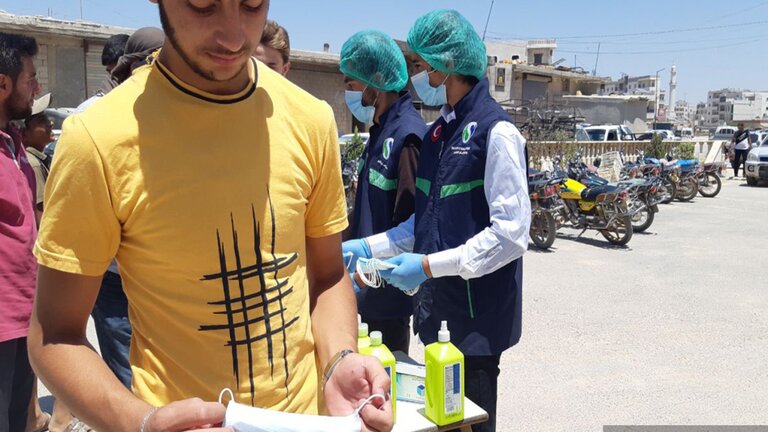 The circulars issued by the directorates attributed the suspension decision to "the requirements of the public interest and the safety of students and administrative and educational staff," indicating that the decision enters into force on Saturday and ends next Wednesday, with the continuation of online learning sessions.

Several organizations working in northwest Syria issued a statement saying that the spread of Covid-19 is still increasing in this region, as infections are concentrated in the most densely populated cities.

The organizations pointed out that the coronavirus crisis is worsening the humanitarian situation in light of the continuing decline in purchasing power, low levels of food security and increasing rates of poverty and unemployment.

The Idlib Health Directorate issued a statement on Friday, in which it spoke about the disastrous situation in Idlib and its countryside, due to the dangerous increase of coronavirus infections.

The statement said that the high number of infections is causing increased pressure on hospitals designated to receive critical and serious cases of Covid-19 patients.

The statement pointed out that if the number of infections continues to rise at this pace, it will hard to control the situation, adding that “a state of emergency must be declared in the area, in order to handle the situation with the utmost seriousness and take all necessary preventive measures to be applied on the ground."

Doctor Mohamed Al-Salem, working in the Assistance Coordination Unit (ACU) responsible for following up this epidemiological situation in the region, considered that "the north western region is going to be in a very dangerous situation as a result of the increasing pressure on hospitals containing coronavirus units.”

Al-Salem added, in an interview with Rozana: "We are about to reach a dangerous period because there are no real measures to contain the propagation of the virus. There are no efforts in terms of imposing quarantine, isolating those who contracted the disease, wearing masks and abiding by social distancing rules."

Meanwhile, Muhammad Hallaj, Director of the Syria Response Coordinators, said that "there is a complete absence of precautionary measures whether at the population level in cities or refugee camps, and for the medical personnel,” while expecting the number of cases to continue to rise in the coming days.

In an interview with Rozana, Hallaj indicated that “the danger lies in the significant breadth of the diameter of the virus’s propagation, as we continue to record infection cases in Idlib and al-Bab city (east of Aleppo), and among the medical staff (about 1000 cases), in addition to the infections in camps (about 450 cases).”

Escalation of raids and artillery bombardment

Russian military aircraft launched on Saturday morning several air raids on Jabal al-Zawiya region in the southern countryside of Idlib, after a night of intensive artillery bombardment by the Syrian regime forces on the region.

Russian warplanes bombed each of the towns of Sarjah and Kafraya in the southern countryside of Idlib with high-explosive missiles, which left widespread destruction of civilian property, without recording casualties.

The Russian raids came after an intense artillery bombardment by the regime forces on Friday night, targeting the city of Ariha and a number of towns and villages in Jabal al-Zawiya.

The military analyst, Colonel Abdul Rahman Hallaq, said during an interview with Rozana that military escalation has become commonplace in Idlib due to the Russians’ ’lack of respect for their pledges.”

Hallaq added: “The Russians used to violate the armistice with the intention of killing, destroying and displacing the population no more... These criminal acts will lead to the displacement of many people who live in these areas."

In a related context, Hallaq ruled out the possibility that the Russian forces will reach new areas, attributing this to the understandings signed between Russia and Turkey, and the influence of the "Turkish factions that became a De facto reality on Syrian soil," in addition to the fear of hindering the development of bilateral relations and igniting war between the two parties.