Stifling Transportation Crisis in Damascus and its Countryside Exhausts Students 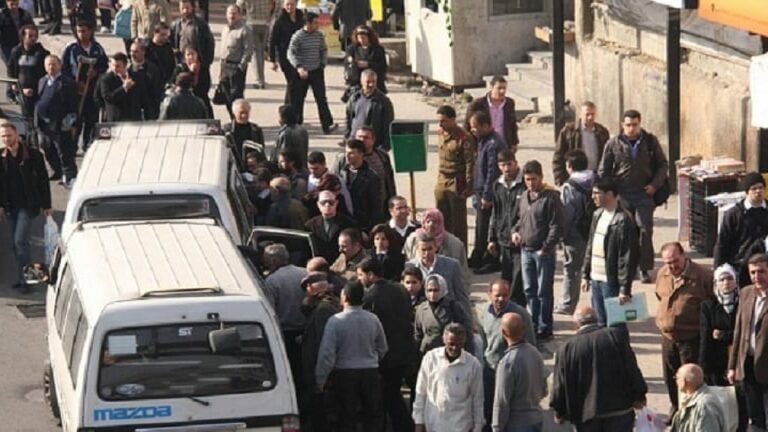 For more than two weeks, people in Damascus and its countryside, have been suffering from a stifling transportation crisis, due to the lack of public transport.


The crisis was actually exacerbated due to the decision made by the regime's government to raise fuel prices a few days ago, which negatively affected the daily life of citizens, especially students.

Schools, universities and students contract with microbuses’ owners at the start of the school year, as a way to ensure their arrival on time, but the current transportation crisis has turned their daily trips into nightmares, and exhausted them financially and psychologically.

Amid the shortage of gasoline, and since the Ministry of Internal Trade and Consumer Protection raised the price of subsidized fuel to 450 Syrian pounds and unsubsidized oil prices to 650 Syrian pounds, on 19 October, citizens, who could not afford taxicabs anymore after doubling its fees, resorted to microbuses, which offer transportation at reasonable prices, despite the recent increase of this service’s prices too.

Samar Al-Mohamed, 30, who lives in the countryside of Damascus, said to Rozana: “The severe transportation crisis affected everyone, including students and employees, as the number of microbuses decreased dramatically two weeks ago.”

She explained that some students who live in the countryside and study in the city, had to stop taking microbuses due to the gasoline crisis and high prices.

Al-Mohamed indicated that “some students had to pay double fees to the microbus owners so they can go to their schools. People who used to pay 7,000 or 8,000 Syrian pounds per month before the transportation crisis, have to pay nowadays 15,000 Syrian pounds, while others choose different methods to reach their schools or workplaces, such as riding in the back of a truck or a Suzuki, or walking long distances sometimes.”

She explained the difficult situation of the students especially that many among them, who are from Douma and Harasta in the countryside of Damascus, have to go to the capital Damascus to study.

Al-Mohamed added that many students wait sometimes in the Abbasid garages in Qaboun for two or three hours to get in a microbus, or else they will be forced to take a taxi and pay about 7,000 Syrian pounds, or look for a relative in Damascus to stay overnight.

Third of salary for transportation fees

Al-Mohamed told Rozana that as an employee residing in the countryside of Damascus, she waits for the microbus in the morning for about an hour, and upon returning home she might wait for two additional hours in the Abbasid garages, and sometimes she has to pay 7,000 Syrian pounds to a taxi.

With the fall of the value of the Syrian pound, the Syrian citizen needs more than four times his average salary, which is currently estimated at 40,000 Syrian pounds, in order to secure daily life needs.

The exchange rate of the US dollar today is 2445 Syrian pounds, according to the Syrian Pound Today website.

A study by Al-Furat Center for Studies, issued last July, revealed that the Syrian family, consisting of five members, needs 686,000 Syrian pounds to secure their monthly food needs only, in order to be able to live at the same livelihood level of 2009 and 2010.

Amina Al-Assi, 22, a student at Damascus University, told Rozana: “Before the transportation crisis, I used to take a cab from Al-Midan neighbourhood to Mezzeh for 1000 Syrian pounds. Now, it is impossible to do that as the same distance in a taxi costs 3,000 Syrian pounds.”

Al-Assi added: “With the ongoing crisis, the cost of transportation has doubled, especially after the bus that used to take me from Al-Midan to the mezzeh for 100 Syrian pounds was cancelled. Now I have to take two buses in order to reach Mezzeh for 200 Syrian pounds and the same amount on my way home," pointing out that some students sometimes prefer to walk the entire distance.

A member of the executive office for the transport sector in Damascus governorate, Mazen Dabbas, expected a 55 percent increase in taxi tariffs, after the decision to raise the price of subsidized and unsubsidized gasoline, according to what Al-Baath newspaper reported on Sunday, while many Syrians confirmed to Rozana that the taxi prices has doubled automatically since the price of gasoline rose, without any official decision.

Dabbas indicated that the internal trade report on determining the tariff increases is expected to be issued on Monday, stressing that “the governorate, in cooperation with the traffic police, will follow up the new tariff and monitor the taxi drivers’ adherence to the new regulations.”

The average tariff of a taxi in Damascus for short distances was about 1000 11pounds before the rise in gasoline prices, while cab fees are expected to rise after the recent increase to 1,500 Syrian pounds if drivers commit to it, according to Snack Syrian.

The causes of the transportation crisis

Dabbas held the Rif Dimashq governorate responsible for the crisis, as the authorities there permitted the microbuses to contract with schools, institutions, and laboratories, at a time when the Damascus governorate suspended this kind of deals, which led to a defect in transportation networks, reported hashtag Syria.

Amer Khalaf, a member of the executive bureau for the transport sector in Damascus countryside, said that the governorate has not given any approval or exemption for a long time to any microbus service.

According to media reports, the microbus crisis was due to the drivers’ attempt to change their transportation lines, or their refusal to adhere to the entire specified line, in addition to allowing them to contract with schools, universities, students and employees.

Dabbas attributed the overcrowding at public transport stations to the microbuses’ drivers reluctance to work regularly, as a result of the delay in obtaining their shares of fuel, leading to a shortage of this type of transportation, which operate in all lines.

Another reason for this crisis, according to Dabbas, is the presence of a number of microbuses in the Damascus Countryside - Damascus line, working at prime time to transport students to and from their homes, in order to fulfil their obligations with private schools. This crisis coincided with an alarming shortage of bread, water, electricity, and other commodities.

The governorate of Damascus, along with other areas, has witnessed a fuel crisis. Thus, Syrians have circulated on social media platforms photos of long queues of cars stretching for hundreds of meters in front of gas stations, amid widespread public anger at the crisis, which disrupted the life of citizens, who they are already suffering from poor living conditions.