Syrians’ call to Al-Assad: ‘we are starving, our men are crying’ 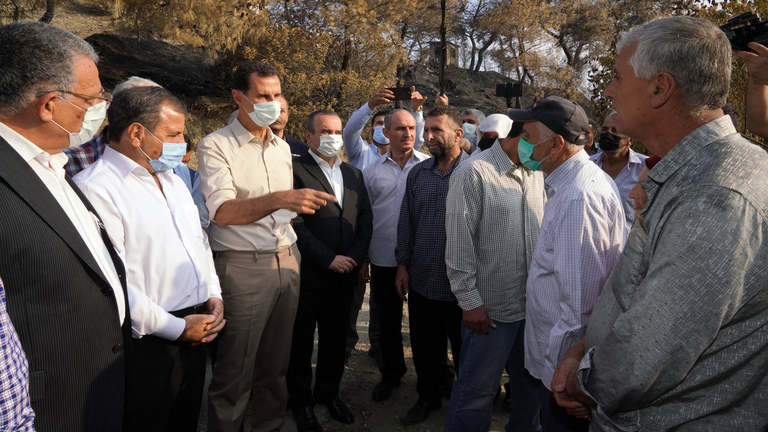 "We are starving, the country's wealth is being looted, our men are crying. We do not have jobs or money." These were the words of the Syrian regime loyalists to head of the state Bashar Al-Assad, during his visit to the Syrian coast after the outbreak of massive fires in the area, which destroyed thousands of hectares in the last few days.

The message, posted on the Facebook page of the International Latakia News Network, was addressed to Al-Assad under the title “The Scream of a Syrian citizen", in which Syrian citizens complained about poverty and misery, blaming the regime officials for their situation.

The letter stated: "We persisted through the years of war and endured watching our children in coffins. We have borne the oppression, injustice and the plundering of our rights to earn a living. We are starving and the country’s wealth has been taken away. We do not have jobs or money. Who will stay in these wrecked houses? We all have been displaced in this country."

The letter continued: "Young men spent 10 years in the army and now they lost hope. Our girls became prostitutes. Many youth became drug addicts. Fathers cannot provide for their families anymore. Men are crying, and an entire generation has been lost. This is a scream of a Syrian citizen who is starving and suffering from poverty and oppression."

The Syrian citizens accused state officials of being responsible for nepotism, bribes and theft, while calling for finding "honest" people to run the country.

In another message to Al-Assad, the Syrian citizens said that “the regime officials do not care about the people. Every one of us knows that the pain we are enduring is caused by our leaders’ inability to understand what is happening on the ground," considering that the current situation is worse than the years of war, siege, bombings, missiles and kidnappings.

More than 150 fires have erupted in Latakia, Tartus and Homs since last Thursday, taking the firefighters days to extinguish the blazes. Thus, the Minister of Agriculture, Mohammed Hassan Qatna told local radio station Sham FM, yesterday, that 11500 hectares were destroyed in Latakia and Tartus, noting that 60 percent of the land are forests and 40 percent are cultivated.

Qatna stressed that the only 4 percent of the total area of cultivated land has been burned, which will not affect production and the local market. However, it will affect the farmers, who were expecting to make profits this season.

According to the Syrian regime’s Ministry of Agriculture, the number of fires in the governorates of Latakia, Tartus and Homs reached 156, all of which were extinguished, while the number of affected families exceeded 27,000 in Latakia governorate only.

The Syrian citizens’ messages coincided with Al-Assad's visit on Tuesday to the village of Balloran in the Latakia countryside, which is one of the areas that witnessed unprecedented fires a few days ago, causing the destruction of large areas in three governorates, reported SANA News Agency.

According to SANA, Al- Assad listened to the locals of the village, located in the northern countryside of Latakia "to identify the necessary steps to persuade them not to abandon their lands and plant new trees as quickly as possible."

Al-Assad appeared in a video talking and discussing the situation with citizens in the region. Thus, the Syrian Presidency’s media team focused on showing that the president is listening to the locals’ demands, and promised them to restore the land as soon as possible.

He also said during his visit that the government "will assume the financial responsibility to help those who have been affected by the fires," adding that he will find appropriate solutions in cooperation with benevolent contributors.

Al-Assad also said that the government and civil society organizations have been providing "financial support since the outbreak of the fires."

The Damascus Chamber of Industry launched a few days ago an initiative entitled "Peace and serenity upon Syria" to support the people affected by the fires that broke out in different regions of the Latakia countryside.

The Damascus governorate sent a relief convoy in Latakia to help the areas damaged by the fire. Many locals said they did not receive any help, while others consider the rehabilitation and cultivation of land, which is the source of their livelihood, more important than the food and supplies.

Rami Makhlouf, Bashar al-Assad’s cousin, posted on his Facebook page on Tuesday evening that he had allocated 7 billion Syrian pounds, equivalent to $3.5 million, from the profits of the Ramac Humanitarian Foundation, affiliated to Syriatel, to help the people affected by the fires.

The announcement was made a few hours after Al-Assad visited the fire-stricken villages in Latakia.

However, Makhlouf said that the freezing of his funds by the Ministry of Communications is preventing him from securing the amount of the donation.

The Endowment Directorate in Latakia has also allocated food supplies to people living in areas affected by the fire in several villages (Dafeel, Balyun, Al-Qamouhia, Ayn Al-Tineh, Wadi Qandil, Al-Qaraniyah, Balloran, Al-Zaytouna Al-Fajr), according to posts on its Facebook page. While some Syrians confirmed that the aid did not reach Balloran, they demanded the authorities to deliver the relief supplies to other affected villages, such as Umm al-Tayyar and Bakas near the village of Dafeel.

The fires have worsened the situation for the Syrian population. As such, the United Nations World Food Program (WFP) warned in late June that Syria faces an unprecedented food crisis, as more than 9.3 million people lack sufficient nutrition, in light of the coronavirus epidemic, noting that the number of people who suffer the shortage of basic foodstuffs has increased by 1.4 million during the first half of this year.