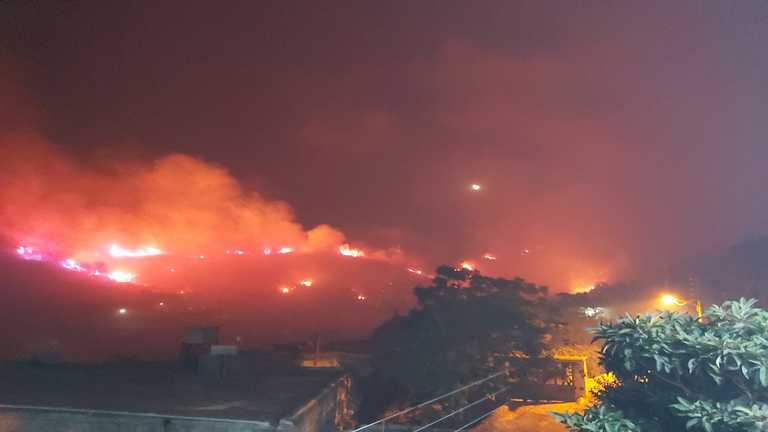 The fire suppression operations on the Syrian coast are still ongoing until the time of preparing this report, as massive fires broke out yesterday in large areas of the governorates of Tartus, Lattakia and Homs, at a time when an academic loyal to the regime accused parties (he did not name) of starting the fires.

Today, Saturday morning, SANA news agency reported that firefighters in the Latakia governorate are still trying to extinguish the fires raging in forests, woodlands and agricultural lands in the Qardaha countryside.

Another report by the agency indicated that the firefighters in Homs were able to control most of the fires in a number of forests in the western countryside of the governorate, while extinguishing operations continued in the forests of Qorb Ali village in Mount Al-Touari.

In Tartus, firefighters are still working with the people to cordon off the fires that broke out in the Banias area, Jabal Hamad forest, Junaynet Ruslan and Zaghreen in Duraykish.

Yesterday evening, the fires burned hundreds of hectares of agricultural land and thousands of olive trees, in addition to woodland trees and greenhouses, as the olives picking season approaches, which will cause significant losses for the locals of the coastal regions.

The official attributed the intensity of the fires to the strong winds in these rugged geographical areas, while indicating that once the fire suppression operations are completed, a damage assessment will be made.

Pro-regime media reported, Saturday, that the regime's health directorate evacuated the Qardaha hospital after the fires reached its outer walls.
The Minister of Health, Hassan Al-Ghobash, told the local newspaper, Al-Watan, that Al-Haffah Hospital in Latakia countryside evacuated three critical cases infected with the coronavirus from the hospital's isolation unit to other covid-19 facilities Latakia, after the fire reached the city of Al-Haffah.

An academic at Tishreen University in Lattakia revealed that the fires that broke out yesterday are nothing but a major sabotage operation threatening the environmental, economic, tourism and housing security of Syria, describing the situation as an act of "high treason."

Dr Riyadh Qara Falah, a professor of climate science in the geography department at Tishreen University, said on his Facebook page that “nature does not destroy itself,” indicating that “when 20 fires break out in separate and distanced places in a forest, and in a frighteningly difficult way that firefighters fail to control, one day before the winds turned dry easterly, which made humidity rates in coastal areas drop significantly, even less than 25 percent, it means that the fires were premeditated by a person or a group of people.”

The professor also suggested the presence of "a knowledgeable party that observes and fully understands the weather conditions, in which the winds help the fires expand on larger areas, meaning that the involved parties are well aware of what they are doing.”

Ha added that “the fires broke out for the second time within a month, with the same weather conditions and most importantly in new places that are not affected by the previous fires."

The academic pointed out that "the fires broke out at dawn when the atmospheric pressure is high, the winds are at their calmest pace and the weather is relatively cold compared to the day time. It is known that the winds get more intense during the day and not at night when the air pressure is low."

"This means that the person who caused the fire knew that the winds will intensify with the sunrise, and the situation will become catastrophic during the afternoons with the presence of the dry eastern winds", said the professor.

He indicated that "global statistics indicate that out of every 100 fires, there are only four fires that may be caused by weather conditions,” noting that the most important cause of fire is the lightning strikes, “but we are not in winter."

In the same context, the President’s call to hold a prayer for rain to extinguish the fires was mocked by many Syrians on Facebook.

The Ministry of Endowments issued a communiqué on Friday to all the mosques in the regime-controlled areas stating: “Under to wise direction of President Bashar al-Assad, the Ministry, the Islamic Jurisprudence Scientific Council and the Union of Levant Scholars call for holding a prayer for rain on Saturday after the noon prayer (Zuhr) in all mosques in Syria, to beg Allah the Compassionate, the Merciful to bless us with the rain that will lift the present calamities and put out the fires.”

Dozens of fires erupted at dawn on Friday in the countryside of Latakia, Tartus and Homs, which led to the destruction of vast forested areas, agricultural lands and resulted in human casualties, in addition to intensifying displacement movement from some areas due to the approaching blazes.

Yesterday, the Syrian Ministry of Health announced two deaths and 20 suffocation cases due to fires in the governorates of Tartus and Latakia.