An employee in a Covid-19 center threatens a citizen: ‘Do not shout, my voice is louder!’ 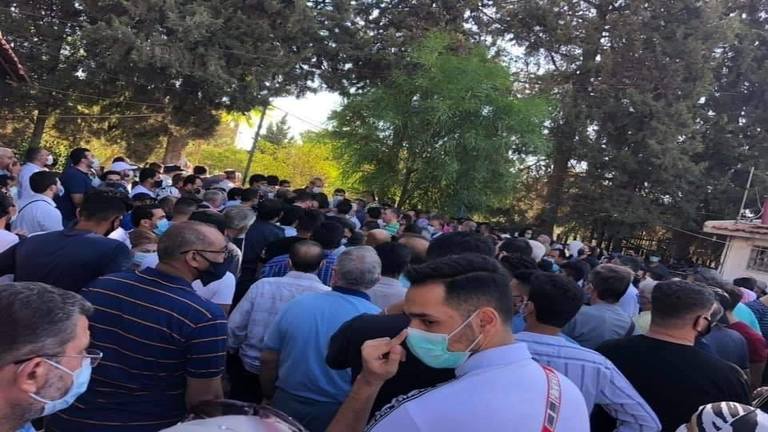 After the spread of a video of an employee at the Covid-19 Examination Center in Damascus, where she was calling the gathering in anger: “There are positive cases among you, please stick to your turn,” the situation was repeated in one of the developed centers in Al-Jalaa Sports City in the capital, Damascus, in the absence of rules, precautionary measures, and overcrowding among citizens.


A staff member in the town of al-Jala and a citizen were in trouble for a long time, and another citizen was on Thursday. The two parts' voices were louder, and citizens accused employees and the government of corruption after wasting their time waiting in vain, according to a video circulated on Facebook.

The new center in Al-Jalaa City witnessed overcrowding among citizens and it was impossible to maintain the social distancing, which was the goal of opening the centers, according to what appeared in the video.

Ghazi Abdel Ghafour, one of the activists on Facebook, said that the citizen paid  $100 for the swab, in addition to booking a plane at least $500, and in case he doesn't get the swab and deliver its result before traveling, his loss would be great, in addition to the agony of waiting.

Fares Zakhour, a Syrian journalist, said on “Facebook” that Al-Jalaa City has been in chaos since the morning. He indicated that no clarification was received about the withdrawal of the medical staff, and that the swabs were stopped, pointing out that the request for imaging in Al-Jalaa was rejected.

He added that a source in the Damascus Health Directorate reported that the center is working without swabs, which required the medical team to leave.

The crowding also comes due to the countries' request for the results of the Covid-19 PCR examination, no later than 4 days before the departure date. In Lebanon, the Ministry of Information announced that travelers arriving to Lebanon from countries where the Corona examination is available, except for children under 5 years old, and 96 hours before the examination results at the counters of bag registration before passing to the Immigration Department, and if the test is positive, the passenger is not allowed to travel.

The Ministry of Health of the Syrian regime's government has designated Al-Jalaa City in Mazzeh, Damascus, on Thursday, as a center for conducting PCR swabs to diagnose Corona, for those wishing to travel outside Syria.

Tishreen Sports City, in the Baramkeh region, has also been designated as a center for taking swabs, starting from Sunday, August 16, due to the lack of absorption of the main center dedicated to examining Covid-19, according to what the Ministry of Health announced on Wednesday.

On a daily basis, Syria witnesses dozens of infected people by Covid-19 in an accelerated way, especially as the precautionary measures were eased at the end of last May, as the Ministry of Health in the Syrian regime government documented, on Thursday, 75 new infected cases, raising the total cases to 1402.

Overcrowding is more prevalent in bakeries, Syrian Trade Foundation centers and markets, and more recently in Coronavirus Test Centers for people who intend to leave Syria. Photos taken in front of the Corona test centers show that citizens are not taking any preventive measures.

Seemingly, this was not the only concern that emerged in the media, as a video that goes viral has shown the dramatic overcrowding of citizens in front of one of the Coronavirus test centers, provoking anger among the public.

The video showed one of the employees shouting to the crowd with anger: "There are positive cases among you, please stick to your turns", which means that the outbreak of symptoms on people in good health is only a matter of time given the confirmed cases among the people who gathered and the overcrowding in the place.


The decision imposed by the Ministry of Health regarding the cost of Coronavirus test caused Syrians' outrage that can be noticed on social media, as the ministry has set a $100 test cost for Coronavirus diagnosis for each person who wants to travel abroad. Also, it imposed on July 22, four centers that are not approved to deal with cases to realize the test.

Despite the difference in location, the measures adopted by the regime's government did not differ either in terms of relations with the citizens or with regard to preventive measures, as a photo has spread out showing the crowds of citizens in front of the "Al-Istiqlal" hall of the Syrian Trade Corporation in the city of Al-Mazra'a, west of As-Suwayda. These citizens were awaiting their turn to receive their rice and sugar allowances, yesterday Wednesday, without taking any preventive measures such as wearing a protective mask or maintaining a social distance, which may increase the spread of Coronavirus due to negligence and the lack of any monitoring made by the competent authorities related to the regime's government.

The Facebook page "As-Suwayda 24" said that some people believe that overcrowding is due to the lack of supplies needed in the room which are available only a few days per month, since they are unable to buy these products at high prices elsewhere. United Nations organizations have recently issued reports stating that 84% of Syrians live beneath the poverty line. 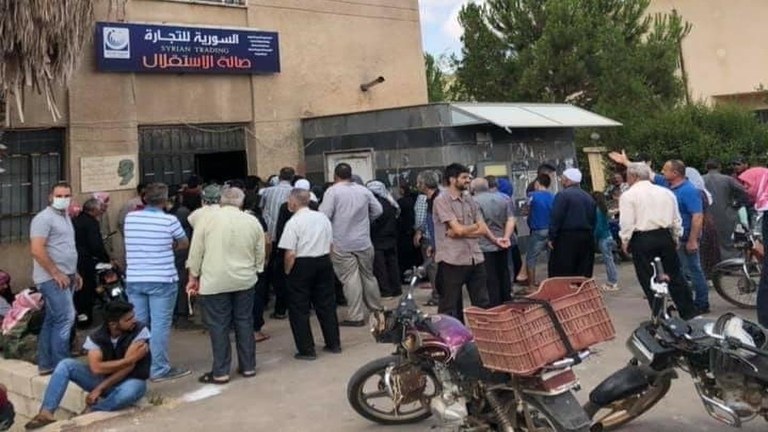 The governor of As-Suwayda, Hammam Debyat, stressed on the 5th of this month the importance of monitoring social distancing and wearing masks at the "Syrian Trade" access points, and if the case required intervention by force the police might interfere, he told the newspaper Al-Watan.

He also calls on the Health Directorate to oversee public transport in order to ensure the respect of preventive measures, in addition to monitoring the prices of masks in pharmacies, and ordering the establishment of local committees to supervise and minimize gatherings, particularly in bakeries, wedding ceremonies and other places, as well as compelling citizens to wear masks during such gatherings.

Today, Thursday, the Syrian government's Ministry of Health confirmed an additional 75 new cases of coronavirus, thus the total number of cases in Syria has reached 1402, including 53 deaths and 395 recoveries.