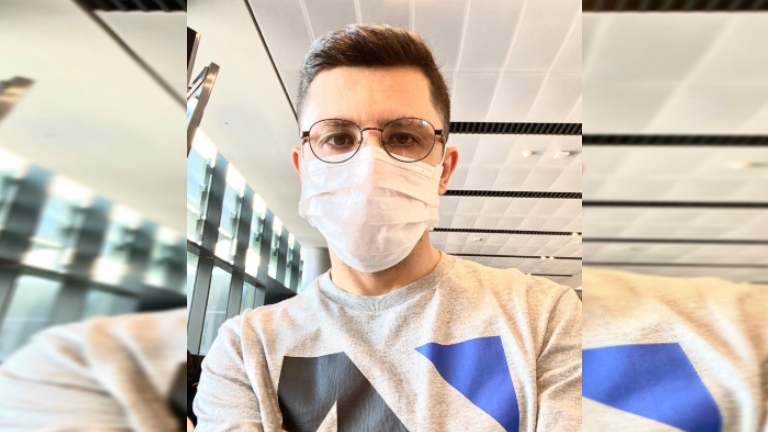 News | 01 Apr 2020
“I survived the Coronavirus by relying on paracetamol pills and the  strength of my immune system only, and I didn't receive any treatment with chloroquine,” said the young Syrian man, Wassim Saad el-Din, to Rozana on the way he was recovered from the Coronavirus.

Wassim, 32, is a Syrian refugee from Homs Governorate, and arrived a year ago to France. He has suffered for two weeks from the Corona pain that has greatly weakened him. According to him, the strength of his immune system, which he boosted with vitamin C and other health measures, dispelled all the exhaustion that besieged his body during the first week of the infection, which is the peak of the disease.

How was he infected?

Wassim explained that the infection was transferred to him in the middle of last month, on the plane that took him from Istanbul, Turkey, during his return trip to Strasbourg, where he resides. He said: “I was on my way back from Istanbul, and on the plane there were two people with signs of flu sneezing and coughing. I was afraid of that, and after two days, I started showing symptoms such as headache, high fever, cough and cold, and at that time I knew that I was infected with the virus.”

Wassim added that his health condition was subjected to remote monitoring by the family doctor via the Internet and he was put in complete quarantine away from anyone, for two weeks, as he reached out to doctors for Internet video treatment.

“At the beginning of the infection, chloroquine was not permitted. So, I treated myself with vitamin C and paracetamol only. I used to take only this drug,” he continued.

Regarding the pains, especially since the seventh day of his illness, Wassim stated that the symptoms were “severe and constant headache, in addition to unprecedented pain in the throat. I used to feel as if I were swallowing thorns, in addition to acute pain in different parts of my chest, muscles and limbs.”

Wassim noted that the follow-up of his case by the specialized doctor was permanently twice daily, until he reached the stage of recovery after the end of the sixteenth day of his illness.  “I recently slept for more than 16 hours a day. The doctor assured me that the beginning of this stage indicates recovery from the virus. She said that the immune system needs long sleep after getting tired of  the Coronavirus and the body will need deep rest. At my age, the strength of my immune system is very helpful in overcoming the virus.”

How would you advise infected people?

Wassim clarified many of the healthy steps that he did and helped him recover from infection with Corona: “I advise every person to have more vitamin C, whether from pharmacies or to rely on oranges and kiwi; kiwi was very beneficial for me as it strengthens the immune system. Likewise, I used to drink a daily cup of hot water with a spoonful of honey and lemon juice ... It is important to drink lots of fluids and water. This is very important; and I relied on vegetables as well ... Stress is totally forbidden, as this weakens the immune system, and this is what I experienced at the beginning of my illness.”

On Wednesday, France has recorded 509 new deaths from the Coronavirus, to reach the total number of 4,000 people, and recorded about 5,000 new infections in one day, bringing the number of cases to about 57,000.

French Health Minister, Olivier Veran, announced that France has requested more than a billion masks to confront the COVID- 19 outbreak. The minister referred during a press conference to “the establishment of a close and intensive air bridge between France and China in a way that facilitates the entry of masks to our lands,” stressing that his country needs 40 million masks per week.

Whereas, French Economy Minister, Bruno Le Maire, said that his country will propose the launch of a European bailout fund to contain the economic crisis caused by Corona, to be financed by a joint borrowing for a limited period, which may be 5 or 10 years.

The COVID -19 virus has infected nearly 1 million people. The data gathered for the number of cases around the world showed that the number of infections reached 860,000 until yesterday morning. Platform Worldometer data, the international statistics specialist, revealed that the total number of deaths exceeded 42,000.

The United States is on top of infected cases numbers, followed by Italy, Spain, China, Germany, France, Iran and the UK.