Syrian IDPs: We cannot buy detergents... Our tents are made of garbage 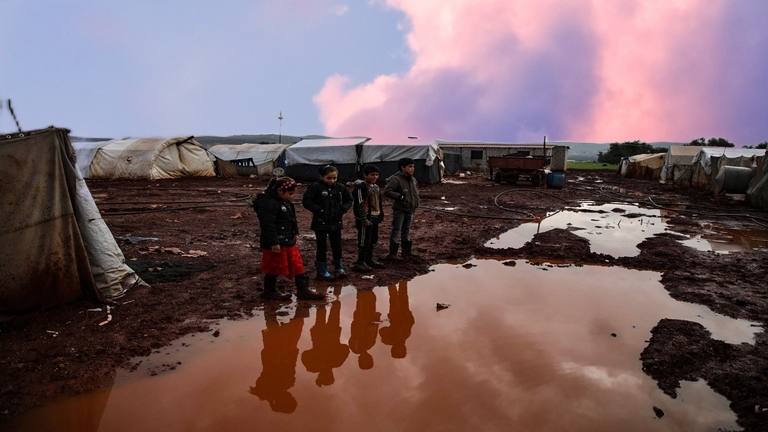 Investigations | 24 Mar 2020
In the far north of Syria and notably in the camps on the Turkish border, the possibility of an outbreak of the Corona pandemic remains pervasive. Only one single case inside these crowded camps is enough to cause a rapid spread of Coronavirus, given the lack of minimal safety and protection measures to avoid the threat of the virus, also known as Covid-19.

Fear is growing among the people living in the camp as the invisible opponent is able to invade their tents at any time, in addition to the absence of the preventive measures. Those who were interviewed by Rozana's correspondents in the region say that the security conditions are not respected in the camp, as there is not even enough distance between them and no sterilization or protection products are available.

The application of the global recommendations is not possible by displaced persons living in the camps in the north.  The policy of "social distance" recommending that individuals stay one and a half meters apart is considered as one of several preventive measures to limit the spread of the "Coronavirus”.

Civilians' concerns about Corona escalated after the virus outbreak in Turkey. This is due to the weak individual or institutional capabilities at the medical or civil levels to secure means of prevention or rehabilitation of quarantine areas.

Lack of sources of income lead to "Corona" outbreak

Ahmad al-Aboud, one of the displaced people who is currently living in the camp of Deir Hassan in the northern countryside of Idlib, expressed his concerns to Rozana about the spread of Coronavirus in their camp, especially that he lives in the camp with his family members, including woman, children, and his old  parents.

"We don’t have any idea about prevention and the procedures that must be followed. Also, my aging father is afraid of this virus, as it is very difficult to deal with, so whenever we give him food, he refuses eating for fear that it is contaminated with something," he added.

Ali Al-Dandal, one of the displaced persons in the southern Idlib countryside, in the border camps, said: "We are afraid of the spread of Coronavirus. As we are living in camps in neglected areas ... We are also unable to provide protection against the virus because we cannot control our children inside the camps, or prevent them from going outside, and playing between the swamps of contaminated water, with exposed sewage networks."

Although they are aware of some ways of prevention against the Coronavirus by following the publications on social networks, the majority of the people living in the camps cannot afford protection for themselves as they are unable to purchase masks and sterilization materials. Besides, they cannot stop their daily work and remain in quarantine inside the camps. The reason was the same for all of those interviewed by Rozana’s correspondent, namely the absence of any source of income.

Meanwhile, some interviewees in the northern Idlib camps indicated that they are not actually afraid of "Corona". In fact, they live in a totally contaminated environment, as Mahmoud al-Hamad, one of the residents of Atma camp, said: “If the virus reaches our camps, we will not have the ability to provide methods of preventing disease because we are unable to provide medicine for our patients who suffer from high blood pressure and diabetes. So, how will we be able to provide sterilizers and detergents? We can only use soap, as an only way of precaution; that’s all that we can do.”

Director of Regional Policy and Advocacy for the International Rescue Center in the Middle East, Metsey Boswell, stressed that the conditions in Idlib pave the way for the spread of Corona. Many cofactors, including lack of food, clean water, and exposure to cold weather, leave thousands of people in bad health conditions and turn them into vulnerable targets to diseases and viruses such as COVID-19.

Although there are no confirmed cases in Idlib, the location where the test will be carried out is still unclear, while the disease can easily find its way to the population.

Indifference and insisting on shaking hands

Some volunteer organizations and teams have worked on spreading awareness posters, instructions to prevent the outbreak of the virus and showing ways to deal with the infected person. However, these simple measures cannot prevent the spread of "Corona'' inside the camps in light of the absence of complete sterilization of the area. Besides, imposing a curfew outside the camps and securing other accommodation to prevent direct contact between large numbers of displaced people in a narrow geographical area can prevent the spread of the virus.

Also, there is a serious state of indifference that takes over the refugees as some of them, in Deir al-Balout camp in Afrin, expressed to Rozana’s correspondent that the dangers and horrors that they experienced during the previous years are greater than the Coronavirus crisis, according to their description.

Mohamad Musab, a nurse at the medical point in Deir al-Ballout camp, said that people there believe that, after surviving the siege, hunger and bombardment, Coronavirus is something that they can easily confront. Musab added that “the problem lies in the lack of awareness of the danger or even the magnitude of the disaster that can be caused if the Coronavirus spreads in the camps”.

Musab told Rozana about their recurrent attempts to raise awareness among the residents of the camp to avoid gatherings, handshaking and to stay in the tents, especially children and the elderly, but most of the residents remain indifferent, except for a minority of them, as he pointed out.

Saida Youssef, a resident of Deir al Ballout camp, told Rozana that the issue of prevention inside the camp is difficult because the distance between the tents is no more than 1 meter. She continued that “regarding their cultural background, the people here do not accept not shaking hands with friends and neighbors when greeting them. It is not possible to prevent visits as we cannot tell people not to visit us. The least we can do is to take care of personal hygiene, but we hope they can provide us with sterilizers and masks because their prices have recently increased significantly and it has become difficult to purchase these hygiene tools.”

There is only one medical point in Deir al-Ballout camp, where more than 900 families reside. It is supervised by a number of nurses and the nearest hospital from the camp is approximately 5 km away. Meanwhile the Turkish “Afad” organization has recently distributed awareness brochures about the Coronavirus.

We don't know what Corona is!

“Corona? I haven't heard about it before,” Khalaf Al-Ramadan, who is a displaced person from the Deir ez-Zor countryside in Sahelat al-Banat camp, northern Raqqa, told Rozana. He added that they do not have any TV or the Internet to know what is happening in the world.

“There are more than 200 tents in Sahelet al-Banat camp. Most of the camp's residents are children and women from the countryside of Deir ez-Zor and Homs, all working in the dumpster next to the camp. They collect nylon and plastic from the garbage heaps, and sell them for small amounts that help them to stay alive. Therefore, personal hygiene and prevention measures will not help us because diseases surround us and have lived with us for years in this camp.”

For her part, Shamsa al Mohamad, 70, said that she is not afraid of “Corona”, as it will not be as devastating as living in the garbage. She added: “Nobody came to tell us what Corona is, it is the first time I heard about it, they did not give us advice or masks, cleaning materials, etc. We are suffering from diseases before the spread of Corona, and our children are already sick due to garbage.”

In the village of Abu Kubaie, in the western countryside of Raqqa, about 450 displaced families from Idlib are living in a seemingly more organized camp, where there is a medical point, a school, and good health facilities. This camp is sponsored and supervised by the “Northern Democratic Brigade” and “Revolutionary Army” factions affiliated with the Syrian Democratic Forces (SDF)

Doctor Hussein Mansour, medical point official in the camp, said that “during the previous week, the sterilization teams affiliated to the Self-Administration had sterilized the entire camp. We are working to educate parents about the seriousness of the virus. We emphasized taking all personal hygiene measures, cleaning the tents and facilities in the camp. We asked the concerned authorities to provide sterilizers, masks, and gloves, and we are monitoring the health situation in the camp and following it on a daily basis to ensure the safety of all residents of the camp.”

The Kurdish Self-Administration announced the imposition of a curfew in all areas of the administration, Raqqa, parts of al-Hasakah and Deir ez-Zor, starting from last Monday, as a preventive measure to prevent the spread of the Coronavirus.

The International Committee of the Red Cross (ICRC) said earlier that it is taking measures to prevent the spread of the Coronavirus in al-Hole camp for displaced people in al-Hasakah, and expressed its readiness to provide assistance in other parts of Syria.

“Our field hospital continues to operate in al-Hole camp, and our team has started taking all necessary precautions to prevent the spread of the virus,” said Ruth Hetherington, Red Cross official.

“The ICRC is ready to provide possible support to the quarantine and emergency centers in Syria, as well as to support various preventive measures against the virus,” she added.