Single Mothers Facing Death for the Life of their Children 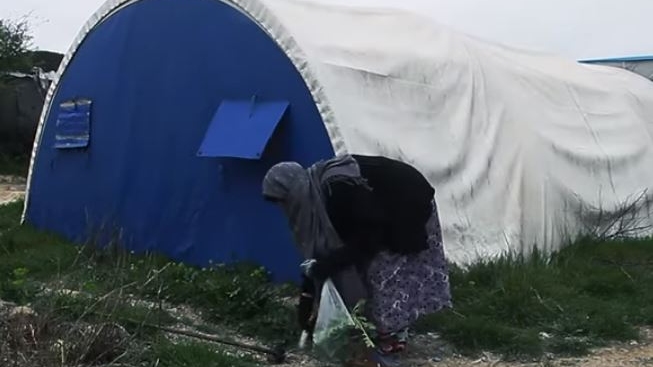 Throughout the war years, Syrian women have managed to cope with very difficult circumstances, stood up again and became totally responsible for their families, although some of them have remained alone, and others have faced as much physical as psychological suffering.

Some women found themselves facing huge responsibilities, such as providing livelihood for their children in the absence of their husbands due to the war conditions.

“My son has been disabled for 23 years. He has been paralyzed as a result of a traffic accident,” said Hajja Umm Marwan to Rozana, adding that she has been “working to secure their livelihood and the needs of her disabled son, after her husband died months ago, leaving her without a breadwinner.”

Among the plants that she harvests are (al-Sulaik, Bay laurel, and al-Huwaish), as she sells them to the nearby shops in the market, although she is suffering from health problems.

Umm Muhammad makes tandoor bread to provide for her children

Syrian women are known for being the best in making tandoor bread, which has provided them with acceptable incomes and supported them during the war and displacement.

“We were forced to flee because of the war and the advent of the regime forces. My husband and my brother-in-law were then martyred. So, I was left with my sons and daughters without a breadwinner,” said Umm Muhammad, from Hama, to Rozana.

She went on, saying: "I decided to start making and selling tandoor bread, because I needed it, and I found it acceptable because I can make it in my house and can stay close to my children."

"There was a very good demand for tandoor bread in the past, but now the situation is different and there is no longer demand," she added.

Because of her work in making tandoor bread, Umm Muhammad is tired, as she said, and her health condition has declined, which has become a burden on her in terms of work.

She would rather pack cigarettes than beg for help

“My son was deprived of his father,” said Khawla Bakdash, a Syrian woman who took refuge 4 years ago in Turkey.

“I work in the field of cigarettes to be able to secure my livelihood. We manage to eat and drink and no one knocks on our door, asking for money he had lent us.”

Khawla does not receive any kind of refugee assistance. “I will do anything to feed my son,” she said.

Khawla has previously worked in a bakery, a restaurant and as a maid. She added “When son wants his favorite food. I tell him God is generous, I’ll get it to you when I have money.”

Even in refugee camps there are working women who try to sustain themselves, since the war has shattered their families.

“I live alone in this tent, I sell chips and biscuits to children, to buy bread and milk, I go out to the camps, in order to sell to the children, and I wait for Allah to help me get my livelihood,.” said Umm Ayman to Rozana.

The displacement shattered Umm Ayman’s family and friends between the camps and she remained alone, suffering from pain in her body.

Umm Ayman explains that she went to the doctor who told her that she is suffering from acroarthritis and she needs 1 million Syrian Pounds, but she does not have even 1 Pound of the amount.

She added: “I was in the village with my children, living a quiet life, but now I live alone in a tent, while my children are far from me. Two of my children were killed due to the bombing, and my husband also died.”

She concludes her conversation with Rozana: “I do not like this life, my only wish now is to die and join my children and my husband, and I cry terribly every day alone.”

Media reports are filled with stories of Syrian women who defied the conditions and were able to succeed in their work, especially when they choose non-stereotypical fields such as mechanics or driving, or some fields that men occupy because of the life pressures left by the 9-year war.