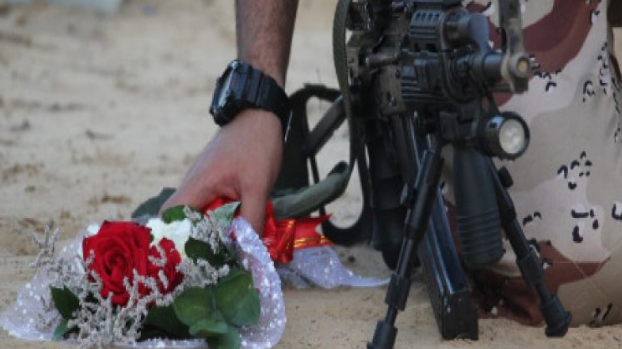 During the past years, the war dispersed thousands of Syrians, and threw them into a constant search not only for their lost selves, but for their loved ones with whom they have unforgettable memories.


Mohammed Othman, 29, was one of those who lost part of their hearts when his love story was forgotten; a love story drawn on the walls of the city of Darayya in Damascus countryside with a girl he could only meet when each of them had his own family.

A rebel and lover

Aya is the girl Othman loved when the revolution began to flare up in Syria in 2011 and the popular movement escalated in his hometown Darayya.
Othman told Rozana: "I was one of those who participated in the popular movement, sometimes in coordinating the protests. During one of the demonstrations a girl came and asked me to give her a sign with anti-regime slogans to carry, and then she repeated her request in more than one demonstration."

According to Mohammed, Aya was more daring than him as during one of the demonstrations she asked for his phone number so as to coordinate a night-time women demonstration, and when that demonstration ended she called him and told him she fell in love with him.

It was a surprise for Mohammed, but the biggest surprise was when he learned that she was the sister of a supporter of the Syrian regime, who refused to oppress the protesters with weapons, and despite that they remained in contact and it became clear that Mohammed shared the same feelings with Aya.

"She used to go out of the house in secret to participate in the demonstrations and see me at the same time," he said.

Everything seemed perfect in their relationship and they were heading for more encounters to strengthen their love until something that Mohammed did not expect happened.

"I was waiting for her to join the demonstration as usual, so I can see her, but suddenly Aya stopped calling and did not show up at the protests and I learned from her friend that her brother knew about our relationship, and that we were meeting with each other during the demonstrations, so he locked her in her house and took her mobile phone."

“At that point I had to ask to marry her officially,” Othman said. He continued: “Knowing that my family opposed the marriage because of her brother’s support for the regime, I went with one of my relatives to her house, but her brother refused to talk to us in and rejected my request.
”
The obstacle Aya's brother placed in front of our relationship did last for so long, as he was killed more than two years later in a helicopter raid targeting the Darayya market.

"When I asked her mother again to bless our marriage, she said that we should delay it until the situation of the city calms down a little," Mohammed added.

When the battles in his city intensified, Mohammed had to join the fighting fronts to defend what he describes as "my second beloved, Darayya.”

She had to leave

In 2016, many of Darayya's residents left their city and headed to northern Syria as part of agreements signed by the regime and the opposition. This is when Mohammed had to taste the bitterness of separation again, as Aya decided to leave with her mother and relatives and asked him to accompany her.

"I refused to leave. I told her that I will join the fighters, and that our meeting will be in Idlib," said Mohammed.

He continued: "The next day I went quickly, leaving the front, to bid farewell to her. I found her leaning her head on the bus window glass, and once she saw me she began to smile. Her hand was shaking when my hand touched her behind the ominous green bus window glass.  Her eyes were filled with tears from the pain of leaving. Her looks assured me that the separation was real, but the situation was much harder than I could expect.”

In search of the beloved

Mohammed did not stay long in Darayya, as he was also forced to leave as the city was completely emptied. He headed to the north of Syria as well, to the city of Maarat al-Numan in particular.

He tried to find Aya in different ways, but his efforts were unsuccessful until he lost hope to be reunited with her. So he decided to settle in the city of Maarat al-Numan in the Idlib countryside and work as a mathematics teacher.

In mid-2019, under the pressure of his family, Mohammed said, he was forced to marry a girl, who knew his story with Aya, and he named his little girl, later, after his first love.

At the end of 2019, Mohammedfled Maarat al-Numan under the intensity of the Syrian regime’s shelling, and he went to the mountains of Harinoush in northern Idlib, where he was forced to sleep in the open with others. The biggest surprise was when the humanitarian organizations began to help the displaced people there.

Mohammad told Rozana: “When a relief organization distributed meals, the local council of the town divided women and men. After I took the meals I heard someone calling Aya’s name. At that moment my heart started beating quickly and I stood unable to walk or even to look behind me".

Aya told Mohammed: "My mother decided that I should marry my cousin without even consulting me, and she refused to go to Maarat al-Numan, so we went to the eastern countryside instead. She took my mobile phone and forbade me, along with my husband, from using social media to prevent me from reaching you. I did not utter even one word, and I let my tears tell what was going on inside my heart. I told her that I had married too and had a baby girl, I named Aya, and when asked about her husband, she said that he was seeking to secure a house for them in northern Idlib.”

One tent kept Mohammed from meeting Aya; that tent in which her family lived.  Later on, Aya left the camp when her husband discovered what happened and urged the whole family to prepare to leave. By then, the two lovers, whose love became nothing more than memories of a pure affection that took place during a moment in time, had to be separated again.

Idlib countryside has been under intense bombing by the regime and Russia, since late April. In November, the raids increased in frequency, killing and wounding tens of civilians, and displacing tens of thousands, although the Russian-Turkish agreement stipulated the suspension of hostilities in the region.

Stephane Dujarric, a spokesman for the United Nations Secretary-General, said that more than 830,000 people have been displaced from northern Syria following the military escalation by the regime forces and Russia, since the beginning of December.

Dujarric indicated: "Women and children, who make up about 81 percent of the newly displaced, are among those who suffer most,” noting that “humanitarian needs are increasing and the ongoing emergency is complicating the already dire humanitarian situation for people in the northwest of Syria, as searching for shelter constitutes the most urgent need for  them.”

It is noted that Idlib Governorate is covered by the ceasefire agreed upon by the sponsors of the Astana Conference in 2017, and the demilitarized zone agreement signed between Moscow and Ankara in September 2018.