Fleeing Death and Bombings, a Family Takes Refuge in a Chicken Coop 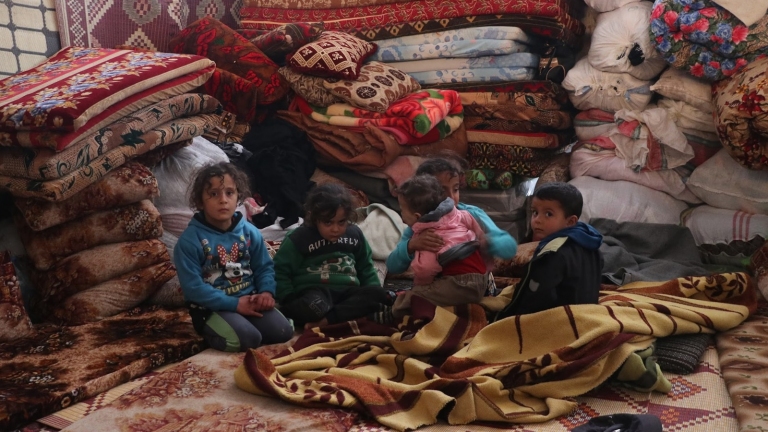 Inside a chicken coop that is not suitable for human habitation, and in a room where mats and plastic sheets form its dilapidated walls, several Syrian families took a temporary refuge, amid a humanitarian catastrophe that has been afflicting towns and villages south of Idlib, in northern Syria, as a result of the forced displacement of civilians due to the military escalation in Idlib.

The room is full of bereaved residents and their simple necessities, because electricity scarcely reaches the refrigerator, and the gas oven lacks basic requirements for its use.

“Ayat, Fatimah, Mohammad, and Abdul Hakim; these are my children; I have other children out there, but these are those with me here.” Thus one of the Syrian women who took refuge in the chicken coop started telling the story of her displacement from her house in Idlib, according to the Civil Defense.

"At first, we did not know where to go. I mean, we just packed our belongings like these people. All the neighborhood was empty, and the news was frightening, my brother; I feared for my children. We fled ... and we took refuge in this chicken coop!" added the Syrian woman.

With the displacement of more than 500,000 civilians during two months of fighting and bombing in northwestern Syria, many people were left with no places to live in, not even a tent on the border. Even schools are full, and those who were lucky have found incomplete buildings, without doors or windows, rented them and lived in them.

"No words can describe the living conditions here; something that had never come to my mind or imagination. I am worried about my children; they still haven't seen anything in this world," continued the woman.

In a place where only the sounds of battles and shelling are heard, fear is prevailing. The lady said: "In this place, I, my children, and 22 other people, including friends and relatives, are staying here, and no men with us."

Backed by Russia, the Syrian regime forces took control of the city of Saraqib in the eastern countryside of Idlib, on Thursday evening, and imposed a siege on Turkish points, ignoring Ankara's warnings from their advance in the region.

The Syria Response Coordinators launched on Thursday a distress call to the whole world, saying: "To the entire world, we are in Idlib, do you hear our voice?" This appeal may not find any humanitarian response, like other previous calls that were ignored and only media statements were issued in their regard.

The displacement is still ongoing in all directions. Along the main roads in the governorate, you can find hundreds of buses loaded with the IDPs’ belongings spread over hundreds of kilometers, carrying their concerns, pain, unknown future, and their children who have not lived their childhood properly, in a video documented by the Civil Defense in Idlib.

The IDPs are forced to endure all forms of suffering, such as deportation and displacement, amid a cold winter climate, under the rain, low-pressure areas, in schools, tents and even chicken coop, with material requirements that they cannot bear. There is no limit to what the citizens living in Idlib might experience; only the unknown is awaiting them.

The United Nations said earlier that more than half a million people were displaced during two months of battles and bombings in northwestern Syria due to the military escalation, 80 percent of them are women and children.

The European Union called for stopping the attacks targeting civilians in northern Syria. A joint statement by the European Union Foreign Minister, Josep Borrell, and Crisis Management Commissioner, Heinz Linares, on the situation in Idlib, on Thursday, said that the European Union urges all parties of the conflict to stop the military operations in the area.