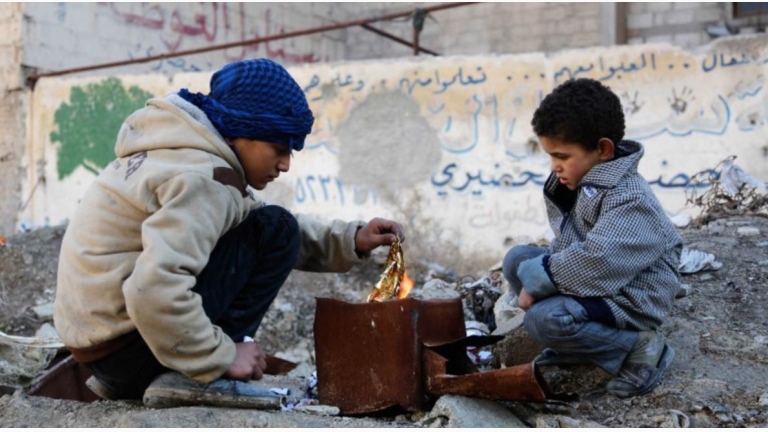 The high costs of living in Syria pushed citizens to the brink of madness, as one of them described, in an interview with Rozana. They thus launched several campaigns to support their deteriorating economy, some of which called for social solidarity, which may be a way out of the "hell of poverty" that imposed itself on a lot of Syrians due to the deteriorating economic situation.

"Syria Bread and Salt," a campaign coinciding with "Our Lira is Our Pride," called on the Syrians to help each other with what they can afford of  foodstuffs and clothing from the principle of social solidarity.

According to its launchers, the campaign aims to "sense the others’ suffering, support the needy and protect them from begging", by reactivating some of the old customs that the Syrians used to, and others are still practicing them.

Some of the habits they demanded to revive are remembering the neighbor by offering a food plate, visiting patients and offering something they need, such as food or clothing, and remembering a poor person by offering a bundle of bread, along with other actions through which people show support to each other.

"When you are buying vegetables, put a piece every vegetable in a bag and lend it to a poor house or a needy person that you encounter in your way... You have clothes that you no longer wear, or an old jacket, it is okay, there are people who are suffering from lack of warmth, take this jacket and give it to someone in need," said the text of the campaign.

It also said: “If you know a poor family in the neighborhood, talk with the other neighbors. Even with some 200 Syrian Pounds from one person and 300 Syrian Pounds from another, you can collect a daily living for this needy family.” The campaign called on the Syrians to be among the initiators in their surroundings to alleviate the broken hearts from the bitterness of life. This has gained acceptance among the Syrians, while some stressed that this is a feature of the Syrian people which does not require any call.

A Syrian activist suggested that merchants buy a bag of sugar containing 50 kilograms for example, and then sell one kilogram for 100 Syrian Pounds instead of 700 Syrian Pounds or more.

He added that if 10 stores in the region worked on the same principle, 500 families would get the commodity, explaining that this would not enrich the buyer and would not impoverish the seller, and that the initiative could turn into other foodstuffs that the citizens need.
"Our Lira is Our Pride" campaign, which is still launched on social media platforms and on the ground, according to the comments made by some Syrian citizens to Rozana, aimed at selling, buying, or providing any service for one Syrian pound. The campaign was well received by shop owners, teachers, and others, such as artists Hossam Junaid and Toulin al-Bakri.
The campaign aims to break the dollar's domination of the local economy, and support the Syrian pound, by selling and providing any service for one Syrian pound only, according to the campaign launchers.
Abdullah Shami, a social activist from Damascus, told Rozana: "The campaign started in several shops, and now it has expanded all over the Syrian territory with its various commercial activities, from merchants, barbershops, to clothing boutiques and mobile phones’ shops and even clinics. We have also recorded the participation of goldsmiths in the campaign, not by selling gold for one Syrian pound, but rather by repairing gold articles."
Shami continued: "Despite everything the Syrian people is going through, citizens are participating extensively in this campaign, and the regime’s government must understand the message and also try to help and contribute to supporting the people and sending corrupt people to prison. Otherwise, the campaign’s benefits will last only for a few days, and afterward everything will return to what it used to be, expansive. By then, the Syrian population will exhaust the last reserve of energy they have, which is totally plausible."
Following the success of "Our Lira is Our Pride" campaign, the Damascus countryside Chamber of Commerce decided that the one Syrian pound category, which has been withdrawn from the market since 2013, does not have any purchasing value.
The Chamber of Commerce asked the participants in the campaign to use the categories of 100, 200 or 500 pounds to support the Syrian pound and help the poor.
The Syrians also called on major companies, which did not participate in the campaign in support of the Syrian pound, wondering about their role in such initiatives.
The Chamber of Industry in Damascus and its countryside announced its accession to the campaign by inviting citizens to shop in al-Jala sports hall in Damascus today, Wednesday, for a one Syrian pound charge for any commodity.
The Syrian citizens also wondered about the absence of MTN and Syriatel companies from the campaign. Thus, MTN respo