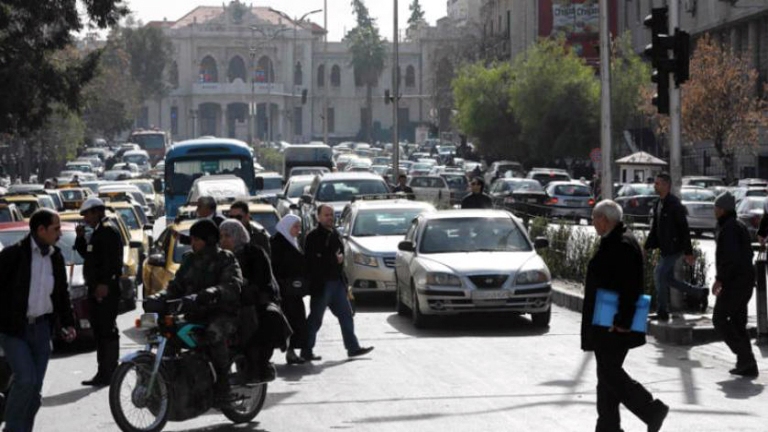 The crisis that is afflicting Syrians’ living conditions in the regime-controlled areas is one of the most severe crises experienced by citizens in the recent history of Syria. Indeed, the unprecedented collapse of the exchange rate of the Syrian Pound against the US dollar contributed to the decrease in purchasing power, which in turn led to the increase of the value of products that have become very expensive and Syrians cannot afford to buy them.


“Hope has become absolutely nonexistent, and every Syrian who has a bit of hope for a better life in Syria is a crazy person.” This is how Ahmad al-Yassin (a pseudonym for security imperatives), a 33 years old Damascene, described the misery and trouble that the simple Syrian citizen suffers, and explained how the deterioration of the value of the Syrian Pound has made a large number of Syrians think about leaving the country.

Syrians are now resorting to social media groups to seek help in any way that enables them to escape the hell of poverty and destitution, according to Ahmad, who explained this by the fact that those who cannot think of travelling outside the country either resort to suicide or die early from a blood "clot" that puts an end to their miserable life.

The General Commission of Forensic Medicine (GCFM), affiliated to the Syrian regime, revealed at the beginning of last July the high suicide rates among Syrians in the regime-controlled areas, as they reached  59 cases since the beginning of this year, although local pages suggested that the number was higher according to their estimates, without being sure from Rozana of the actual number of suicides during the past year. The Director-General of the GCFM stated at that time that the registered cases were documented in all of Syria, except for Deir ez-Zor, Raqqa, Idlib and al-Hasakah.

"The rents of the houses in Damascus, if any, are no less than 300,000 Syrian Pounds. Real estate owners ask for the amount of the rent a year in advance... People are now sleeping in the streets on cardboard, looking in the garbage to eat. Imagine how far the conditions of the people have reached... Since the beginning of the war, there have been two classes in the country: a class of thieves (speaking of blessings), and a middle class that has become below the poverty line," said al-Yassin.

He added: "I need 600,000 Syrian Pounds to live in dignity, although I am newly married with no children and I am not responsible for anyone but my wife... We can never afford to buy heating materials because of their high prices and scarcity. Even if I can afford to buy fuel oil, lighting the heater for only 4 hours per day would cost me 40,000 Syrian Pounds, and this is very expensive. Likewise, securing the already scarce gas bottle requires 15,000 Syrian Pounds.

The expert and economic researcher, Younis al-Karim, talked to Rozana about the negative consequences of the deterioration in the value of the Syrian Pound. He also pointed out that the continuing deterioration and the resulting rise in prices in the Syrian market will result in a "catastrophic reality" in case the causes that led to the current situation are not perfectly addressed.

Al-Karim added that the continued depreciation of the Syrian Pound will have a devastating effect on the lives of citizens, as this will cause a decrease in the purchasing power. In this case, each individual will not be able to obtain basic commodities, as he put it, explaining that "the continuation of economic conditions as they are now will lead to the spread of more corruption and the domination of the shadow economy over Syrians’ lives."

Well-informed local sources from Damascus told Rozana that a fundamental change in the government of the regime is very close, no more than a month, as the narrow circle of government in the Republican Palace will claim that the requirements of the current stage after the deterioration of economic situation are pushing towards forming a new government, in an attempt to calm down angry loyalists  who complain about their deteriorating living conditions.

The sources indicated that the conditions are now appropriate for the narrow circle of the Republican Palace’s authority to reveal a ministerial formation with mostly new names. The governmental changes will affect several positions, the most important of which is the Prime Minister, which is likely to be assumed by Imad al-Azab (the current Minister of Education), and some changes will also affect the Ministries of Defense, Interior, Communications, Transportation, and Electricity.

Meanwhile, other sources in Latakia reported that the protests that took place in As-Suwayda on Wednesday are not considered highly sensitive when compared to the protest in which dozens of demonstrators took to streets on the same day in the city of Jableh in Latakia Governorate. All this had sparked confusion among security forces in the governorate, and raised public concern over the consequences of this development that would shockingly spark protests, whether in Latakia or in other regime-controlled areas.

For the second day in a row, As-Suwayda demonstrators protested on Thursday demanding their rights and expressed their anger amid the deteriorating living conditions with the depreciation of the Syrian Pound. Dozens of citizens, including women, elderly and children, gathered in front of the headquarters of As-Suwayda Governorate and the Traffic Square in the city center, in a peaceful and civilized way to voice their concerns.

The protestors denounced the theft of the people’s living, the government’s corruption and the greed of the merchants. They also demanded the improvement of their living conditions, and shouted against the Syrian media saying: “Liar, Liar, the Syrian media is a liar.” The protestors also raised signs reading: “We want to live and we want our rights. Oh Makhlouf and Shalish! The Syrian people wants to live."

In an expected decision that Rozana revealed weeks ago, the government of the Syrian regime announced the distribution of basic materials (rice and sugar) through its institutions through the smart card, in a clear attempt to monopolize basic commodities,making citizens stand in long queues for long hours. This brings back to memory the economic crisis of the eighties, when the government resorted at the time to distributing basic commodities through coupons, known as "Bonat."

The Presidency of the Council of Ministers stated on its official website last Sunday that "the cabinet decided to distribute the subsidized basic commodities through the smart card in the offices of the Syrian Trade Corporation, some private sales centers and via mobile cars," without specifying the commodities.

“What has been afforded via the smart card will be spent on transportation to reach the consumer corporation. This is in addition to long wait for a kilo of sugar or a kilo of rice, and the employee will eventually tell us that there is no distribution for Today, said Abu Ibrahim, a 45 years old Damascene, to Rozana, adding: “This is a new humiliation for us. What a shame! High prices everywhere! These 200 or 300 Syrian Pounds that the government affords for us will not help us, in exchange for a few kilos of sugar and rice. Can the minister live with a kilo of sugar for a whole month?"

For his part, the Syrian Deputy Minister of Internal Trade and Consumer Protection, Refaat Suleiman, said that every citizen has the right to obtain a kilo of sugar, two kilos of rice, and 200 grams of tea per month via the smart card, pointing out that this policy may later change according to the availability of quantities in the market and in the Syrian Trade Corporation.