Cold Weather Kills Camp Children in Syria... Who is Responsible? 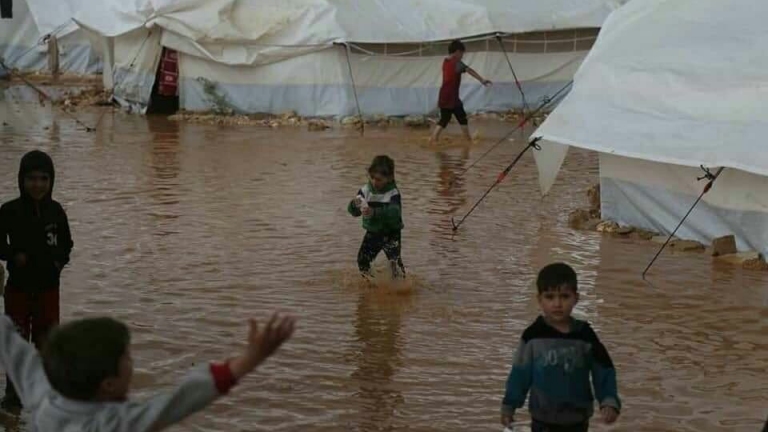 Al-Hawl refugee camp in the eastern countryside of Hasakah, which is controlled by the Syrian Democratic Forces (SDF), is still posing a threat to the lives of IDPs, especially children, due to the lack of care and basic services, as a number of children died during the month of December as a result of the cold weather and lack of healthcare.


Al-Khabour News Network on Facebook, concerned with the news of the eastern region in Syria, stated that a child, whose age has not been determined, died on Sunday in the camp due to the freezing weather and lack of healthcare.

Videos and photos that have recently been circulated on social media showed a number of tents falling inside Al-Hawl refugee camp due to the winds and weather fluctuations.

In addition, a little girl in the camp, named Habiba Ezz Al-Din Al-Matar Al-Nasser, died in mid-December, according to Rozana reporter, along with another child a week after, as a result of cold and lack of healthcare.

“With the freezing weather, the winter season befalling the camp and the indifference  to the humanitarian cases of patients, the handicapped and the disabled people, especially the elderly men and women, the situation in Al-Hawl refugee camp becomes more like a catastrophe and a calamity for its residents,” wrote Solin Amin on her personal Facebook page.
The Syrian journalist added that "the almost-damaged tents do not prevent or protect these families from the hardship of the weather and extreme cold. In addition, the lack of heating devices and winter clothing in the camp has increased the gravity of the situation, especially since international and humanitarian organizations have not paid attention to Al-Hawl refugee camp and have not dealt with the emergency of the difficult winter season. This year, these organizations’ support has not included any plan to replace tents, distribute clothing, quilts, and not even a special heating system for the camp (fireplaces) similar to the other  camps," as she put it.

About 400 children died within 9 months
During the past years, dozens of children died in Al-Hawl camp due to the lack of care and health service. The UN’s Independent International Commission of Inquiry on the Syrian Arab Republic announced in September that at least 390 children died this year as a result of poor conditions, including malnutrition, untreated wounds and other cases in Al-Hawl camp, eastern Syria, home to about 74,000 IDPs, according to officials of the International Committee of the Red Cross (ICRC).
Children make up 66 percent of the camp population, most of whom do not have identification documents, according to UN reports.
The UNICEF said earlier that tens of thousands of children in Al-Hawl camp and several Syrian regions are facing a grave humanitarian situation and are disconsidered, amid the lack of basic human needs.
The UN expressed its concern over the situation of tens of thousands of people in Al-Hawl camp. The UN Secretary-General spokesperson, Stéphane Dujarric, said that about 100 people had died from the beginning of last December until March, one third of them were children under the age of five. The most important causes of death include low temperatures, inflammation, pneumonia, dehydration and complications of malnutrition.
ICRC spokesperson, Sarah Zogari, asserted in September that "the living conditions in Al-Hawl refugee camp are very difficult. There is a very large number of refugees and an enormous pressure on the services provided in the camp, which have largely exceeded its capacity. They are, thus, struggling to cover the basic needs, including the provision of food, water, medical services, tents, and toilets,” according to Al Arabiya TV channel.
The United Nations announced since October that it has begun its winter preparations for the IDP camps, pointing to a gap of 40 percent in the required funding, worth $ 32 million, to provide basic materials, with the general insufficiency of the humanitarian response in Syria widening to 48 percent until the beginning of November.
Danger also threatens children in the north
The situation of displaced children is not very different in Idlib countryside, especially with the intense military campaign launched by the Syrian regime and Russia on the countryside of Idlib since late April, which resulted in the displacement of thousands of civilians from their areas due to the bombing.
Thousands of IDPs have been living outside their houses in olive groves in 242 random camps out of 1,153 camps in northern Syria. The number of IDPs exceeded 962,000 people, including children, from the southern Idlib countryside and the northern Hama countryside, due to the military campaign launched by the Syrian regime and its ally Russia since April, according to the statistics of the Response Coordinators issued in November.
An air strike targeted on November 20 Qah camp on the Syrian-Turkish borders, killing more than 12 people and injuring dozens of others, including children. Mark Cutts, UN Deputy Regional Humanitarian Coordinator for the Syria Crisis, condemned the strike and considered the attack a violation of the international humanitarian law.
Mohamed Al-Hallaj, Director of the Response Coordinators, told Rozana that the camps have reached their maximum accommodation capacity, and are no longer able to receive new IDPs. He added that before the last escalation that started on the 15th of December, these camps were unable to provide shelter for the previous wave of displacement by 35 percent.
Al-Hallaj indicated that to secure shelter for the new IDPs, between 15,000 and 20,000 tents must be secured, while fast food and water are now being provided to IDPs at an estimated rate of only 3 to 5 percent.
Speaking to Rozana, the Director of the Syrian Association for Refugee Rights, Mudher Hammad Al-Asaad, described the situation of the camps as "very bad," clarifying that "the camps suffer from a shortage of humanitarian, relief and medical assistance, with every three or four families being crowded inside a small tent."
Al-Asaad estimated the deteriorating conditions in the camps between 20 and 100 percent, as many of them are "random gatherings" of the people, and they are in dire condition. The situation in Idlib camps is the same as in the camps of Jazira Region and the Euphrates in Deir ez-Zor, Hasakah and Raqqa, especially Al-Hawl refugee camp and Rukban camp on the Jordanian-Syrian borders. The number of IDPs in Rukban camp decreased from 120,000 to 20,000 as a result of security measures, siege and deaths.
Al-Asaad, believes that the flood disasters will recur and worsen after cutting off aids and the UN’s reluctance to supervise the camps.