Only Christmas Prayers Succeeded in Bringing Christians together in Syria 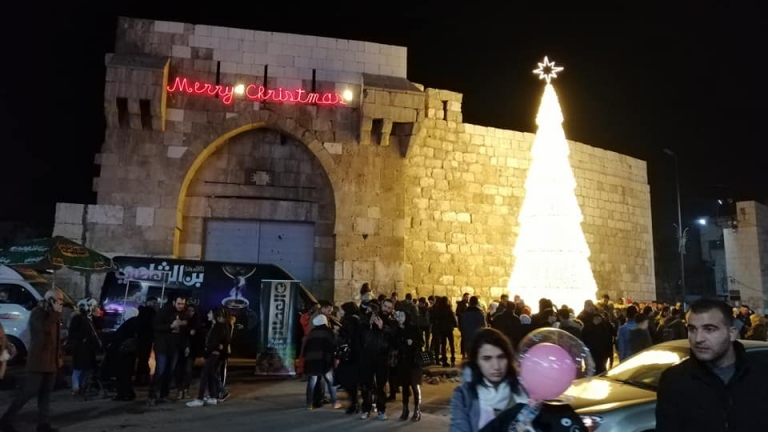 The prayers and church bells on the occasion of Christmas were the only things that brought Christians together in Syria. While Hasakah's Christians were fearfully celebrating in their houses, and Christians of Idlib celebrated silently for fear of al-Nusra Front, public celebrations were held in areas over which the Syrian regime had regained control.

The Christians of Hasakah Governorate celebrated Christmas amid  intense security presence. The Asayish and Sootoro forces in the city of Qamishli have taken strict security measures to secure the celebrations in anticipation of any attacks or emergency situation. Christians in these areas performed Christmas prayers in the churches of cities and towns on Tuesday evening in the city of Qamishli, which is controlled by both the Autonomous Administration and the Syrian regime, and also in the cities of Hasakah and al-Malikiyah. They have also practiced their religious rituals on Wednesday morning.

“Christmas celebrations were limited this year to the church due to the recent instability in the region, while this holiday used to include many celebrations and carnivals before the crisis,” said Samuel Malaki, a Syriac from Qamishli city. Malaki hopes that “the birth of the Prince of Peace, Jesus Christ, will be a new birth for Syria in general, and Hasakah in particular, so that the joy of this holiday comes back to every Christian family, especially children."

On New Year's Eve, Abdul Rahman returned loaded with bags containing nuts, sweets and some fruits. Despite his deteriorating financial situation and the difficult circumstances, he cannot make the occasion pass without his children celebrating with the children of his neighbor, Paul. On Eid al-Adha, he receives congratulations from Paul before his brothers, Shams Antar told Rozana. She added that "the celebration of the New Year has become an occasion for all residents of the region without exception, as the birth of Jesus Christ is the most prominent historical occasion in the life of mankind and is adopted internationally. Therefore, joy is spread among all citizens of the region, indicating the depth of religious beliefs in the hearts of people despite the apparent aspects of the sweeping material life, as the human being remains a religious being despite all developments."

Shams pointed out that "being a Muslim, she celebrates with her neighbors and Christian friends of all sects this occasion and do not care about that group of Muslims who launch malicious fatwas in order to implant differences between society segments. Humanity, thus, remains an umbrella that unites them and it has included the honorable people of the whole world."

Damascus witnessed its first Christmas rally at the beginning of the current millennium, after which Christmas celebrations took their unprecedented public character.
During the past nine years, churches celebrated this occasion, amid an insistence on showing festive manifestations, in an attempt by the regime to emphasize the stable security situation in the country.

Despite the high rationing situation of electricity and the difficult economic conditions that Syria is facing amid the collapse of the Syrian Pound against the Dollar, lights were distributed this year in Bab Tuma area and the Umayyad Square in a provocative way to citizens.

Blogger Salwa Zakzak, who lives in Damascus, said on her page that the spreading decorations in the country are the biggest provocation for hungry citizens whose children study under candles light.

Sixty-year-old Muhammad al-Rashi died due to standing for long hours in gas queues in Rukneddine neighborhood.
As it did in Aleppo, by lighting the Christmas tree after regaining control over the city, the regime lit the Christmas tree in Daraa, which it said was the tallest Christmas tree in the Arab world, with 29 meters high, in front of the Church of St. George in the village of Bassir.

Despite the Syrian regime's insistence on presenting Daraa as a safe city, the ongoing assassinations and kidnappings against members of the regime forces refute this safe image.

There have been no decorations and ornaments in houses and churches since the military factions affiliated with Al Qaeda, such as Hay'at Tahrir al-Sham, ISIS and Jund al-Aqsa, took control over the city, where ISIS broke crosses and statues in the Greek Orthodox Church in the village of Ghassaniyeh in December 2013.

30-year-old Rima, from the city of Idlib, talked to us about her fear of celebrating the birthday of Jesus Christ, saying: "There is no celebration this year, nor the previous years, because of the fear and caution of the existing extremist factions in the governorate."

Rima added that "Christmas is not just a Christmas tree and a Mass, Christmas is when the whole family members meet in our house and around one table. Now, dispersion and migration have stolen the joy of the holidays from us."

Umm Johnny remembers Christmas rituals a few years ago, saying: “We used to prepare the Christmas tree and decorate it with lights a few days before the New Year.” She added: “When we finish the religious rituals, the ‘father of the church’ welcomes us in a large room where we meet with relatives and friends,” considering this as the most important matter in Christmas.

Nothing has changed in the country for nine years. The holidays go by and the smells of Christmas cakes were mixed with the smell of gunpowder, and the sounds of bullets were louder than the laughter of children.