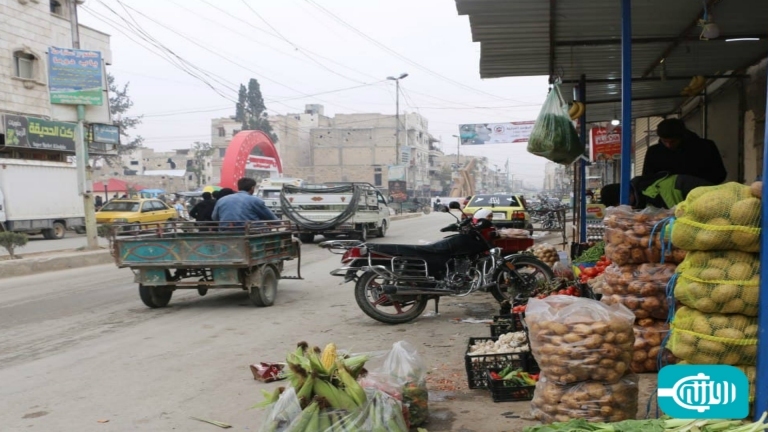 The continuous depreciation of the Syrian pound, and the ongoing increase of the dollar’s value to its highest levels, made people joke about the situation saying that: "the Syrian pound is free falling, while the dollar is enjoying the good life."


The effects of the fall of the Syrian pound against the dollar continue to bounce back on Syrian citizens in light of the sharp rise in prices and weak purchasing power, despite the measures taken by the government of the regime, namely setting the price list and supporting the Syrian pound via traders and businessmen and the temporary floating exchange rate. However, the Syrian pound did not stand up to the so-called “historical” rise of the US dollar.

The Syrian regime government has been unable to stabilize the price of the Syrian pound since 2010, which has led to massive inflation and weak purchasing power.

According to recent UN reports, the poverty line has crossed the 85 percent threshold for the most vulnerable population in Syria. As a result, food insecurity has reached 33 percent.

The increase in salaries approved by al-Assad in the areas controlled by the regime, with an increase of 20.000 Syrian pounds, has not changed anything in relation to the individuals’ living conditions, as prices have continued to increase and consumable goods’ cost has increased by 25 to 30 percent. Thus, citizens have been overburdened by the high prices, which affected the majority of social segments, whether in Damascus or in other regions.

As for the opposition-controlled areas, the situation is not any better, as high prices struck the areas of Idlib and the countryside of Aleppo. Thus, the locals have been complaining of high prices and a major fuel crisis, while some merchants are monopolizing basic goods and selling it for exorbitant prices, threatening of famine, especially in the poorest areas and in the camps abandoned by humanitarian and international organizations.

Our correspondent in the northern regions indicated that the condition of the population has become tragic, while observing the difficult situation in northern Syrian regions. Abdel Ghani al-Erian, Rozana’s correspondent, said that the price of a barrel of medium quality diesel has reached 120.000 Syrian pounds, which forced most of the locals and owners of gas stations to stop buying it. This coincided with a rise in the price of water tanks and the bread bundle, in addition to reducing electricity supplying hours by generators’ owners.

Al-Erian added that the Idlib Health Directorate had previously warned of a disaster which might affect the health sector, due to the scarcity of fuel needed for medical equipment and tools in health care centers and hospitals.

Bakeries in Idlib also have been undergoing a recession due to the rise of fuel crisis and the deterioration of the exchange rate of the Syrian pound against the US dollar, which led to an increase in the price of a bread bundle from 200 to 250 Syrian pounds.

Economist, Dr. Osama al-Qadi, head of the Syrian Economic Working Group, clarified some points about the depreciation of the Syrian pound and the effects of this fall on the population of areas controlled by the regime and the opposition. He explained that this disastrous collapse of the Syrian economy and the subsequent repercussions on the Syrian pound entail an accelerated decline of the currency over a short period of time, baring a severe impact on the living conditions, whether inside or outside the regime controlled- areas.
Al-Qadi pointed out that the majority of the residents of the regime-controlled areas are suffering from a scarcity of goods, recurrent interruption of electricity services, gas and gasoline supplies, as well as the rest of life necessities. He considered that this ongoing deterioration would exert a tragic pressure on the living standards.

As for the recent increase of salaries, al-Qadi drew attention to an important point regarding that not all people are government employees, which means only about a third of the population is benefiting from this increase. In contrast all Syrian citizens will be affected by the price increase, which will bare a negative impact. Thus, the inflation has swallowed this increase in one way or another.

Residents of the camps most affected by financial crisis

Al-Qadi indicated that the conditions in the opposition- controlled areas are not better, as more than two million people, living in camps, are the most vulnerable group affected by this crisis. He believed that this group will face more dreadful conditions in the coming days, as they have no salaries or income, while being in a state of displacement. Also, with the decrease in relief support, the burden will be heavier. On the other hand, these Syrians, who are jobless and do not receive remittances from abroad, will unfortunately have to live below the poverty line, hanging on the verge of a real famine.

As for the transfer of remittances and the preservation of its monetary value, al-Qadi asserted that "people who live by means of these remittances will have to benefit from the best offers they can find, especially with the frequent and daily increase and decrease of the dollar."