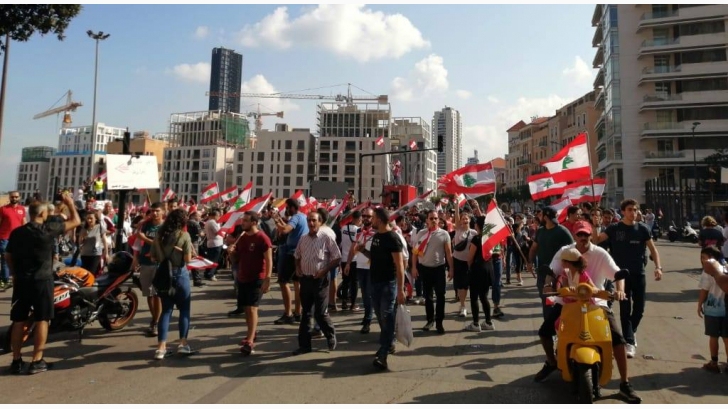 For days, Thousands of Lebanese have been demonstrating in the main squares and roads in protest against the deteriorating economic reality, demanding that the government step down. This has negatively affected the lives of Syrian refugees, who are about one million people in Lebanon.


The Lebanese protests came out everywhere in Lebanon, which has naturally led, in view of the strike that accompanied the demonstrations, to the hindering of the trade movement, as well as the blocking and closure of the main roads. This has in turn prevented many Syrian workers from going to their work, causing the suspension of the only source of income they depend on.

“The current situation in Lebanon has led to a general stalemate in the region, as demonstrators blocked the main streets in the middle of the city and outside it on the highway, which prevents me from going to my building workshop, where I have been working for days," said Mohammad al-Halabi, a Syrian residing in the city of Sidon, to Rozana.

"If the protests continue, I will have to borrow to support my family, while there are many Syrians who depend on the so-called 'daily salary', meaning they receive a daily salary of 50,000 Lebanese pounds ($ 33)," he said. Therefore, they are the most affected by the current situation," added al-Halabi, stressing that "the Lebanese are right in their demands in light of the decline of the Lebanese pound against the dollar and the rise of prices and imposed taxes ... We as Syrians have nothing to do with the demonstrations in Lebanon and we do not interfere in them in any way, I only want to talk about some of the economic reality of the Syrians in Lebanon."

In light of the deteriorating living situation in Lebanon and the high cost of apartment rents, many Syrians work outside the cities where they live, due to the lack of job opportunities in their areas, forcing them to stay in their workplaces.

“In the past few days, I had to close my local shop, which is located in a popular market, because of the blockage of roads, the freezing of markets due to demonstrations, and the closure of many shops for the same reason,” Samer Moussa, who lives in Beirut, told Rozana, adding: “Even before the demonstrations the situation was bad and the economic movement was very poor."

Even schools and banks were closed due to the ongoing demonstrations, according to the al-Tahrir newspaper, while the country is witnessing a general strike, and the closure of major roads in most parts of the country such as Hermel, Chtoura, Baalbek and Sidon.

Refugees in Lebanon, especially Syrians, suffer from a low standard of living as a result of low salaries and incompatibility with living conditions and high prices. Most Syrians in Lebanon describe the region's soaring prices as "tourist prices", amid complaints of stagnation in commercial markets and other reasons, which led them to consider either traveling to Europe or returning to Syria.

A considerable number of Syrians suffer from a lack of working papers, which means that they face several legal problems, starting with a fine of up to $ 600 and ending with deportation from Lebanese territories.

Syrian refugees in Lebanon are facing racism and hate speech, especially from political parties, and prominent officials such as President Michel Aoun and Foreign Minister Gebran Bassil, who have repeatedly demanded the departure of Syrians, arguing that Lebanon can no longer bear the burden of refugees, who threaten its economy.

The United Nations estimates that there are about one million Syrian refugees in Lebanon, many of whom live in camps close to the Syrian borders, amid poor living conditions.