Syrian Women Took up the Challenge of Male-Dominated Professions ... What are These Jobs? 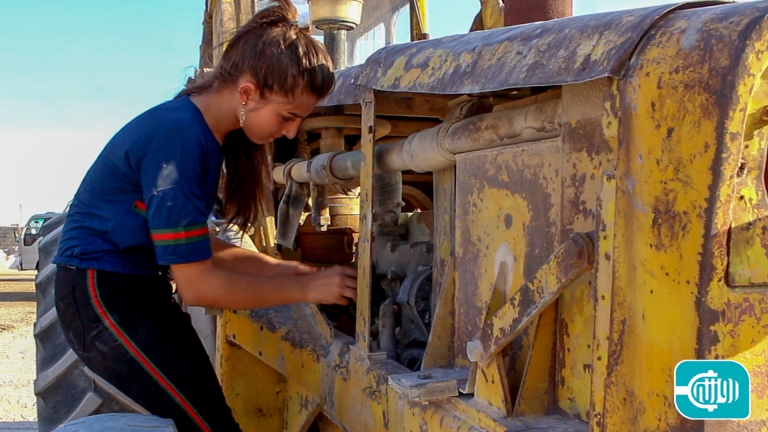 Syrian women have been able to break the stereotypical image of women's work both inside and outside the country by working in professions that have been dominated by men, and being forced to practice them in the past seven years, such as plumbing, construction, bus and taxi driving and other professions that require strong physical abilities.

A Syrian woman in Jordan working in plumbing

Safa Sukariya, 44, a Syrian refugee woman in Jordan since 2012, has proven her competence in this profession and managed to establish a home maintenance company with a female personnel in the Jordanian city of Irbid.

She underwent training by accident, which she initially thought in jewellery, to find out later that it is in the area of household maintenance for housewives. She took up the challenge and worked in the plumbing profession to establish the first company in the Middle East in this area, according to Sukariya.

She obtained a professional license in July last year, after decisions were issued to grant non-traditional professions licenses after they were forbidden to women. Sukariya’s company became the first one in the Middle East to engage in non-traditional jobs, which is the “household maintenance profession” of housewives with female personnel and a training center for ladies, she explained to Rozana.

After breaking the stereotype, Sukariya began to spread this culture and train women who wanted to learn plumbing in other parts of Jordan.


Amuda ... The story of a “female bulldozer driver”

Silva Ahmed, 16, learned driving bulldozers from her father since she was nine years old.

Silva lives with her family, four girls and a boy, in the city of Amuda in Qamishli and decided to work in this area to help her brothers complete their university studies.

She told Rozana: “At the beginning, I was a little bit scared of driving the bulldozer because of its big size.”

Silva learned about oil and engine spare parts, she said, to be the first girl in the area who drives a bulldozer, while neighbors looked at her with surprise, but she moved beyond that stage of shyness.

This is how I was appointed as a bus driver in Damascus!

Abeer Mahmoud al-Zamimi was appointed as a bus driver at the Damascus branch. She applied for the job as a result of poor living conditions. She is the mother of a child, in addition to her retired husband as a result of a war injury, Her Majesty's website said last November.


Several Syrian women applied for the position of car driver announced by the Syrian Trade Establishment of the Syrian regime, and three women were selected for this post, which has long been dominated by men.


While gathering herbs ... I am afraid of murder and kidnapping!

In Lattakia, the percentage of working women has increased significantly during the past two years for various reasons, particularly to provide for the expenses of life for their families after the absence of the breadwinner.

Women were forced to fit into jobs with physical requirements that did not commensurate with their abilities, such as fishing, transportation or transporting goods to the port.

Umm Ali was among the displaced women from Kurd Mountains in northern Latakia countryside.  She has settled in the city fleeing the battles that took place in the countryside. She practiced many professions and assumed a lot of responsibilities, most notably securing the rent.

During an interview with Rozana, she explained that her husband died years ago, therefore she had to go to the city with her daughters. She pointed out that the most difficult thing she had to do was working at a rock quarry, where she had to dig, load and collect rocks for 30,000t Syrian pounds per month, which is equal to about 60 dollar.

She pointed out that the duties of her previous job were limited to agriculture for she lacked any experience in other areas. This situation made it difficult for her to seize a suitable job opportunity.

She also worked as a taxi driver for a short time, giving rides to her neighbors and relatives living in other areas and transporting them to other neighborhoods in exchange for 100 or 150  Syrian pounds.

The city of Latakia is witnessing the emigration of youth abroad to escape forced military duty, leaving their families behind without a breadwinner. Therefore, women are forced to assume this responsibility.

After a long search for a suitable job, Ola (pseudonym) decided to collect medical herbs and flowers from nearby mountains and sell them to merchants in the markets despite the state of fear and fatigue brought by this job.

"When I'm in the mountains, I am always afraid that I might be killed or kidnapped. I find it hard to go back home to Bostan-Al-Samaka district after I finish my work. It's not that easy when I’m carrying bags full of herbs on my back, but I have no other choice. What consoles me the most is the fact that there are other women out there doing the same thing as me."

Ola highlighted that she is suffering from psychological turmoil and pressure more than exhaustion and fatigue, because she is constantly looking for a permanent place where she could sell the herbs she collects. She pointed out that some people exploit her neediness to buy the goods she offers for a low price.

Many Syrian women have lost their jobs as a result of the war since 2011, especially the ones working in the private sector that was closed due to lack of activity, according to a report published by "Medad" center, which highlighted that the poverty rate in Syria rose to 67 percent.

According to statistics published by Tishreen newspaper in March 2017, the Syrian family needs 290,000 Syrian pounds per month in order to secure basic life needs, prompting Syrian women to do new jobs they have never been familiar with and to challenge harsh conditions to keep their families alive.