What Fate Awaits the Workers at the Port of Tartus Following Russian Investment? 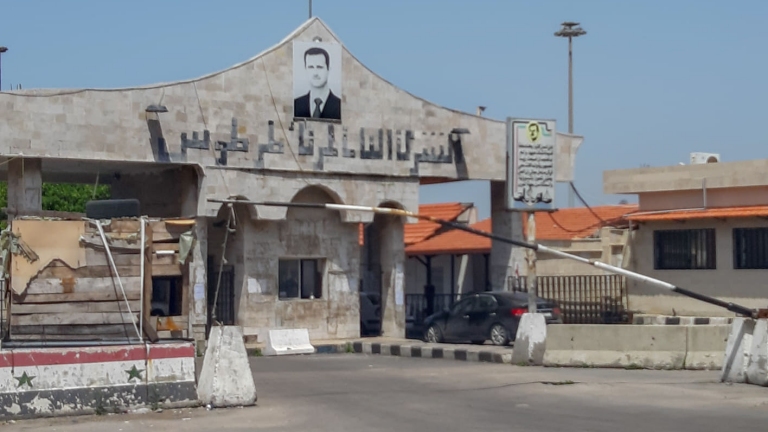 The announcement of the Russian investment in the sea port of Tartus raised many questions, most notably about the fate of the port workers and their future, as many of them are afraid to be arbitrarily dismissed by the new investors.

The worker’s fears arose amid news about a dispute between the Russian investment company and the port administration. One of the suggestions concerning the employees was to keep about 35 percent of the total number of the port’s working force, estimated at 5,350, while reintegrating the rest of them in government agencies, or granting them early retirement.

When asked about the situation of the port workers, Maha, a staff member at the port, answered: "It is clear that the Syrian citizen is the only target in this war." She explained to Rozana that "the ordinary worker with limited income is the one who will suffer the most. We heard many speeches in this regard; however, we are still waiting for actions. There is no trust between the people and the government, as no decision was taken in favor of Syrians; on the contrary, the citizen’s situation has even worsened.”

Maha, mother of five children and who has been working at the port for 26 years, fears that she will be arbitrarily fired without compensation. She is expecting gloomy days ahead of her if her doubts are transformed into a reality. She asserted: "The rise of commodities’ prices has become farcical; the possibility to live with dignity is getting harder, except for the powerful and the hypocrite. We have not seen any sort of right decisions that can restore hope in our hearts or comfort us. In case you dare to speak about people’s grievances, they will accuse you of conspiring with external parties against the country and you will be stigmatized as a spy! So, what are we supposed to do?

Not only the port workers, who spent many years working at the Tartus port, were stuck in this state of worrisome anticipation, but also the casual daily workers and others with temporary contracts, as working at the port provided them with a thin life rope to cope with the lack of sources and hard life conditions.

With his hair shrouded in gray and his wrinkled face conveying the great suffering he had endured after he fled with his family the siege of the village of al-Fu'ah, in the countryside of Idlib, to Tartus, where he works today at the port, Abu Omar complained about his miserable condition while recounting his fears to Rozana: "I fled from one siege to another ... As if fate will not allow me to rest a bit."

He added: "I started working at the port a year ago, without a binding contract or a fixed salary. I worked as a guard for a while, then I was assigned to carry the commodities for another period. I was paid on a daily basis according to the different tasks I performed.”

The number of casual daily workers or temporary contractors amounted to around 1,800. They are only responsible for unloading and loading goods at the port. Their contracts are guaranteed by Law No. 75 of 1979 following the investment order imposed on the port and the company’s rules of procedure, which may change because of the Russian company.

The last decision to regulate annual workers' contracts at Tartous port dates back to 15 September. A decree issued by the Prime Minister’s Office preserved the rights of some 1,700 workers who spent more than eight years working at the port and were always at risk of losing their jobs. The ministry of transport kept them at the port and regulated their annual contracts. This category of workers receives very low wages, especially with average per capita income amounting to 60 dollars, compared to the needs of a family of five worth 460 dollars.

Citizens are increasingly concerned over layoffs and interruption of contracts for casual daily workers at the port, because of the lack of job opportunities in the governorate. According to the Directorate of Social Affairs and Labor in Tartus, the number of registered people at the directorate’s employment office amounted to 235,949.

The directorate was able to secure only 17 jobs in private sector companies in the city in 2018 between March and December.

Tartus population is about 800,000. Al-Baath newspaper pointed out that since 2011 the number of deceased military fighters amounted to 8,689, while no field military operations have been carried out in the city during the past years.

What does the port investment contract include?

There is no clear official document providing a description of the items Moscow and Damascus agreed to sign regarding Russia's investment of the port. Amid tensions, speculations and news published by several media outlets, al-Watan newspaper, owned by businessman Rami Makhlouf, reported Minister of Transport Ali Hammoud declaring earlier that "the investment contract aiming to manage, expand and run Tartus port will be signed with the private Russian Company Stroytransgaz for 49 years. Thereby, the minister denied other’s speculations which described it as a lease for he confirmed: "we do not accept trade-off."

The Public Partnership Investment System implemented in Syria, is one of the public-private partnerships systems. Al-Assad issued Legislative Decree No. 8 of 2007 allowing foreigners to own and lease land and real estate for investment projects.

The minister pointed out that "the life of the contract was defined as 49 years, because the study and the economic feasibility of the project need this period to achieve the profit required for both parties. The investment of Tartus port will provide large revenues to national economy."

The project includes the expansion of the northern part of the port built by a Danish company in 1960, the modernization of its infrastructure and the establishment of a new port at an estimated cost exceeding $ 500 million. Hammoud added in statements to the newspaper: "The harbor is old and the berths are currently between 4 and 13 meters deep and cannot accommodate more than 30,000 to 35,000 tons as the weight of one ship. Therefore, it was necessary to seek to secure new berths with larger depths to accommodate ship loads of up to 100,000 tons, which requires large amounts of money."

The minister pointed out that Syria has "a large experience in the field of investment in seaports. A Philippine company was working at Tartus Sea Port and stopped its work at the beginning of the war. We have a joint French-Syrian administration and investment company that is still operating in the Port of Latakia. These experiences have been successful, and we aspire the Russian partnership to be more successful."

What will change after Russia's investment in the port?

Some considered that the signing of this agreement would have an impact on the international sanctions imposed on Syria, and would lead to a breakthrough in the Syrian economy eroded by the war. It seems, however, that this will remain mere wishes, according to a female employee.

Rahaf, an employee at the Information Management Department, explained to Rozana: "We need to think differently because typical thinking does not solve a difficult problem. Dancing in front of casinos, walking, riding horses or bicycles, distributing sandwiches, juices, books and newspapers on casino queues, or even condemning the issue of the reduction of the number of the port workers on TV screens could not appropriately solve the problem." She continued: "We need bold decisions that would help thwart the economic blockade and implement alternatives to ease the sanctions on the people."

It is noteworthy that Russia’s investments have not only been limited to the lease of Tartus Sea Port, but also increased to include the sea Corniche and the purchase of large sea lands for the implementation of large projects. The company "Stroy Trans Gas Logistic" has investments in several sectors in Syria. Syrian newspaper al-Watan reported that al-Assad issued a law approving a contract signed between the General EST. of Geology & Mineral Resources and the Russian company "Stroy Trans Gas Logistic." Under the contract, production will be shared between the two parties, with 30% of production shares for the Syrian company and 70% for the Russian company.