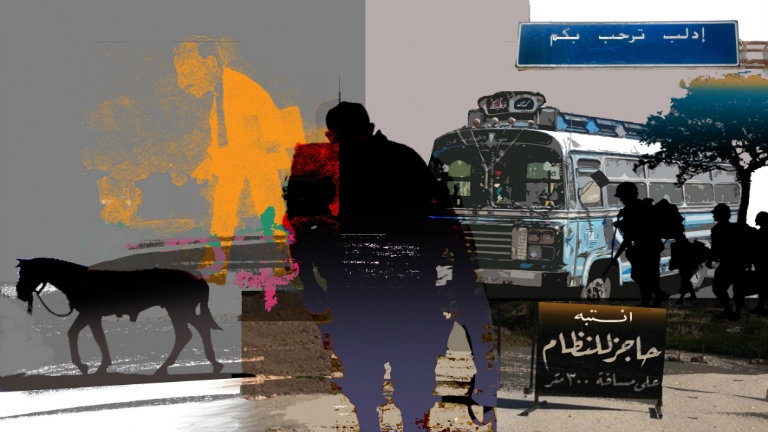 The suffering of public sector employees in Syria has begun to worsen considerably. After the outbreak of the Syrian revolution and its transformation into a bloody war, the production sectors were destroyed and the value of the Syrian pound fell to record levels, leading to higher prices and lower purchasing power compared to the salaries of employees.


However, the issue was not only related to the low salaries of employees, for after the opposition forces took control of the city of Idlib, employees had to travel to the province of Aleppo and then to Hama to get a salary, half of which disappears in transport and in paying the tributes and taxes to the regime checkpoints deployed on the road there.

Abdul Rahim (pseudonym), 46, from Idlib countryside, heads to the center of the town of Selqin in the western countryside of Idlib since the dawn to join his colleagues and get his salary which has been suspended for three months.

Abdul Rahim told Rozana that “By the third month, I have to go and get my salary from Hama province, and as transportation is very expensive, the only solution is to go by bus. Although it is old and cannot be as comfortable as private transport vehicles, its reasonable fare makes us opt for it. The fare of transport cars exceeds 70 thousand Syrian pounds back and forth, while the fare of the bus is 40 thousand pounds.”

He added: “At dawn, we go to gather in the center of the city. The bus cannot enter the neighborhoods to collect employees. The bus leaves as the passengers, whose number is more than 25 employees, arrive. You see them carrying small bags that you may think they are traveling without return, but you soon discover that they brought their breakfast as well as a cover so as not to feel cold while traveling since there is no air conditioning the bus.

There is a lack of accurate statistics on the number of employees of public services controlled by the government of the regime, who live in areas under the control of the Syrian opposition. Some employees, such as teachers, are forced to bring a document which proves that they have a job in order to get their salaries. However, electricity, services, water, or medical sectors do not need to prove their steady job, because of the lack of buildings for them, after the opposition forces controlled the entire province of Idlib and parts of the countryside of Hama.

The Syrian regime is obliged to pay monthly dues to state employees, even if they are outside its areas of control or not at work. The regime does so in order to establish its legitimacy with the UN.

In the city of Afrin, “in the countryside of Aleppo,” they are stopped by the checkpoint that belongs to the “Euphrates Shield” forces, which takes the driver of the bus a thousand pounds for each person, as well as waiting for two hours “at least” in order to obtain permission to leave the city.

Abdul Rahim added that “after leaving the city of Afrin, we arrive at the first checkpoints of the city of Manbij, belonging to the “Syrian Democratic Forces”, where we are transferred to a large square called “Al-tarfik” square, and all passengers and drivers are taken down with their stuff and lined up in a narrow iron fence. Personal identities are taken for what is called “inspection”, and then taken back to the bus to wait until 50 cars are assembled to be allowed to leave. We often stay on the bus for more than 8 hours and sometimes for the whole night until the cars are assembled to 50.  Few minutes before leaving, the municipality employee comes to the drivers and takes a financial taxation of 2000 Syrian Pounds per passenger, and then the municipality tax collector comes and takes the sum of 500 Pounds per person from the drivers also with a tax called (municipal support).

What about the regime checkpoints?

As for the checkpoints established by the forces of the regime, Abdul Rahim pointed out that after they pass through “SDF” checkpoints, there are the barriers of the regime forces which are more than 50, divided into several small checkpoints and four main checkpoints; the first of which is called a “Small Cooper.”

Abdul Rahim talked about the employees’ suffering at the checkpoint. He explained that “all the passengers and drivers are taken down in a large square, IDs are being taken and a thorough inspection of their stuff is being conducted. We stay in the square for more than 5 hours until the 50-car and bus line from Afrin is completed. After more than two kilometers, there is the “Air Force Intelligence” checkpoint, where we stay on the bus for more than three hours; during which the driver takes the IDs for “inspection” in addition to paying two thousand pounds per passenger.

He continued describing the employees’ suffering and said that “among these checkpoints, there are small checkpoints, whose number is more than 30 that stop us to take 500 pounds per person from the driver, until we reach a checkpoint called “Khanaser Checkpoint”. Passengers are taken down and brought into a small room to be inspected by the so-called “quadripartite inspection” (i.e. military, air, and political security branch and the branch of Palestine), then we get to the city of Aleppo, where it is after midnight, which forces us to sleep on the bus until the dawn to start the trip again.

Abdul Rahim continued talking to Rozana: “We leave the outskirts of the city of Aleppo heading to Hama province. We stop at more than twenty checkpoints, where they just check the names of passengers until we reach a checkpoint near the city of Hama, which is a very large checkpoint. The names of the passengers are registered on a laptop, and each person is given a number to check on when we return. We stay at the checkpoint for about three hours until the officer in charge of the checkpoint orders that we leave.”
The suffering of the long journey does not end when the employees of Idlib arrive at the city of Hama. Abdul Rahim thinks that the moments of tension and terror that they have experienced on the long road of checkpoints do not end, as there is more terror waiting in the city of Hama.

After they enter the city of Hama, the bus that took them all the way from Idlib is not allowed to enter the city, forcing them to travel by means of internal transport or private taxis to reach the centers approved by the State Departments to get the salary.

He added: “On the way, we are stopped by a number of checkpoints belonging to the Syrian People's Popular Committees, most of which are from Idlib province. One of them is carrying large lists with the names of opposition families from Idlib province. They identify the name of the family (last name) to make sure that there are no dissident relatives on the bus. But if the name of an opposition family is identified, the person is taken to the internal investigation to prove that he is innocent of the actions of his relatives.

After all these precise procedures, each employee arrives to the center he belongs to in order to get the salary. When they enter the center, their identities are taken and given to the so-called “internal security”, which in turn looks for their names in the lists of wanted individuals in the reports submitted to them.

He added in the same context: “After getting the salary, we wait for internal transport until we get to the bus that remained at the entrance of the city, but while we are waiting patrols of the military police arrive to check the age of men. Anyone who is under the age of 43 is taken to the Division of Recruitment except that who is the only child to his parents”.

The way back is no different from the hardships of a road full of checkpoints with different affiliations. Abdul Rahim described the triviality of what they were seeking for. He said “I wish that after all this suffering this low salary that disappeared in a miserable three-day trip would be enough for me and my family.”

He added talking about the way of return: “After we get our salaries and get back to the bus, we go back to Idlib province. We pass through the same checkpoints, and we stay for a little longer than five minutes at each checkpoint to check the names again, until we reach the city of Manbij. A number of the checkpoint officials there accompany us, until we get out of the city and arrive in the city of Afrin, where we are allowed to stop for few minutes in one of the rest areas and then head to the town of Selqin in Idlib countryside.

Abdul Rahim compared the employee's previous situation to his current situation, saying: “This segment of society has programmed its life on a certain lifestyle. At the end of each month, the employee has a certain amount of money he awaits for, which makes him feel economic security, and despite the frequent complaints about the low salary he gets, he still builds all his hopes on it. However, now, under the war conditions, and with the difficulty of getting his monthly salary, the employee is in trouble, since he will not get it until after months and he has to go through dozens of different checkpoints and behind each question, he is implicitly accused of loyalty to the other party, but in reality loyalty is to the livelihood only.”

It is noteworthy that observers attribute the regime's harassment on employees in the road to getting salaries to its evasion of the financial entitlements they are entitled to receive at the end of each month. As for areas which are not under the control of the regime, they consider passengers’ harassment as a “source of income" exploited by the checkpoints in those areas like the checkpoints of the Syrian regime.