8 Years of Revolution and War ... Who is responsible for obstructing press activity in Syria? 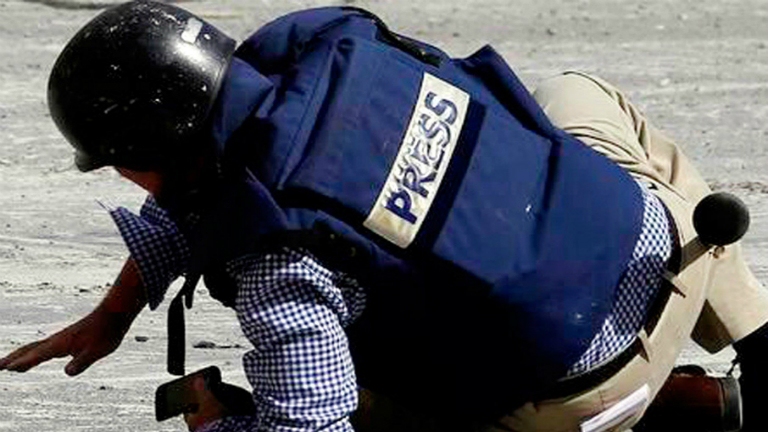 The press and media sector in Syria had to offer many sacrifices over the past eight years working to highlight the events taking place in Syrian territory and the suffering of hundreds of thousands of Syrians in multiple cities during the various stages of the armed conflict in Syria.

Many journalists and media activists have been the victims of various acts of violations, ranging from abduction, detention, or enforced disappearance to death by bombardment, assassination or torture.

One may wonder whether the parties responsible for harassing journalists in Syria and committing serious violations against them, could be held accountable amid the absence of the most important key factors to guarantee this, namely, granting the International Criminal Court the ability to conduct investigations on the ground and tackle these issues.

The reality of the press in the Arab region has never been favorable, for journalists have always been persecuted. The way media professionals are treated in the Arab world has always been awful. It has gotten even worse during periods of wars and crises.

Despite the low number of violations documented by the Syrian Press Freedoms Center in the Syrian Journalists' Association in 2018, this does not mean that the bad situation surrounding media freedoms in Syria is improving compared with other countries in the world.

According to the Syrian Journalists' Association, the main reason behind the decline and change at the  level of the nature, number, and frequency of violations from one month to another is the cease fire that has prevailed in most of the Syrian regions, except for early 2018 when Eastern Ghouta has witnessed large and systematic bombing campaigns waged by the Syrian regime and resulting in many other violations, in addition to the intermittent shelling of the Syrian and Russian allies. The state of chaos and insecurity in the Syrian north also contributed to restricting media freedoms and paved the way for some of these violations. 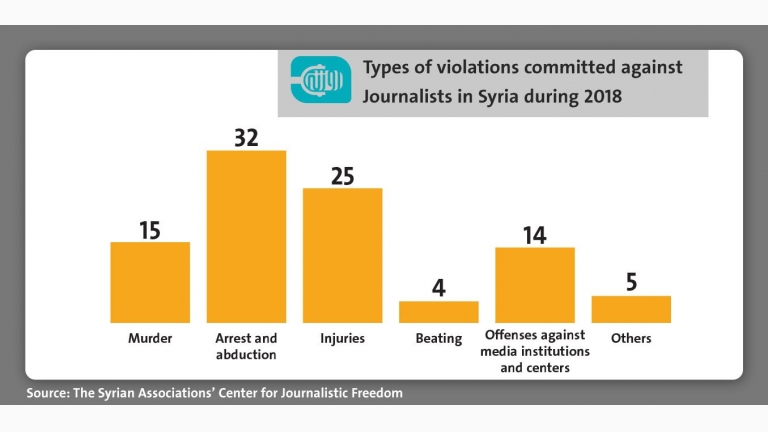 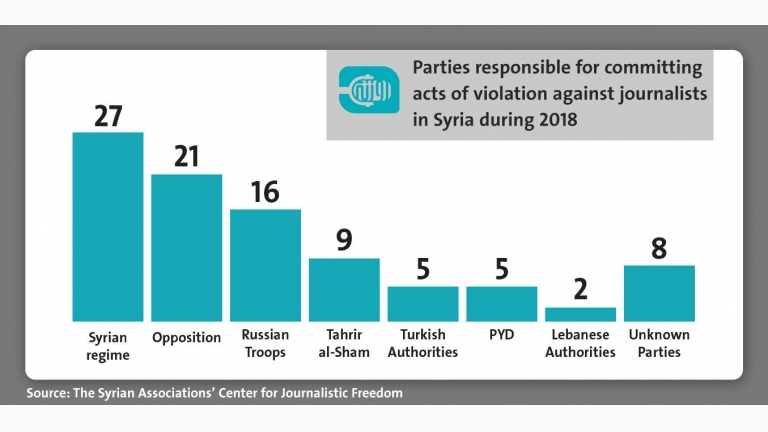 In an interview with Rozana, Mohammed al-Satouf, researcher at the Syrian Associations’ Center for Journalistic Freedom, stated that the media working environment in Syria is precarious and dangerous, threatening the lives of media staff while in duty, for they can be killed or injured.

Al-Satouf added that "members of media staff can be arrested, detained and abducted by various conflicting parties in Syria, especially the Syrian regime, for the journalist played a major role shedding light on events taking place in Syrian territories to the local and international community also."

He added: "Journalists and media activists have become the target of recurrent violations, which are often direct. Media professionals in Syria are also subjected to physical abuse and are prevented from carrying on journalistic investigations and press coverage, in addition to a number of other violations. Thus, hundreds of violations against the media practitioner in Syria have been recorded during the past few years, since the beginning of peaceful protests in 2011.

Al-Satouf pointed out that the situation of media in Syria has been fluctuating from one year to the other; i.e. the risk of violence against media workers increases amid the proliferation of military actions and systematic bombing executed by the Syrian regime and its Russian ally, or the pressures exerted by other parties to hinder the media’s freedom of speech. However, he stressed that the number of different violations has increased between 2013 and 2017.

He noted that the violence directed towards media professionals in Syria is also inflicted on civilians. Such violations, which are employed more intensively by the Syrian regime and its allies using various repressive means, can amount to war crimes and genocide. Al-Satouf stressed that" journalists and media professionals remain the most vulnerable category face this kind of direct aggressions.”

Despite the fact that journalists have the right to be protected as civilians under the provisions of the international law,  the international system is failing to take full responsibility in facing  crimes against humanity committed in Syria. Thus, delaying the enforcement of international justice mechanisms against those who are proven to be responsible for such abusive acts encourages the perpetrators to commit further violations, according to al-Satouf.

He continued: "There are certain institutions and organizations that are concerned with the protection and support of media professionals, such as the Syrian Journalists Association, Reporters without Border, etc. These organizations are attempting to provide the Syrian media workers with protection and logistical support, given their dangerous situation and fragile living conditions inside Syria, as hundreds of journalists in Daraa, Ghouta, and the countryside of Homs as well as East Aleppo have been forcibly displaced. Such NGOs work to protect media professionals as much as possible by ensuring safe refuges for them and their families. "

Al-Satouf concluded: "We, at the SCM, and in cooperation with the Syrian Journalists Association, are always demanding all the international actors to protect journalists and take all necessary measures to ensure the safety of media workers and the integrity of the media profession in Syria." 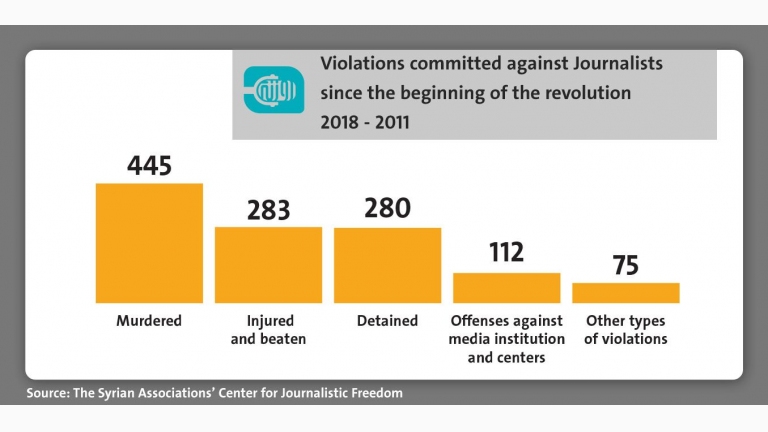 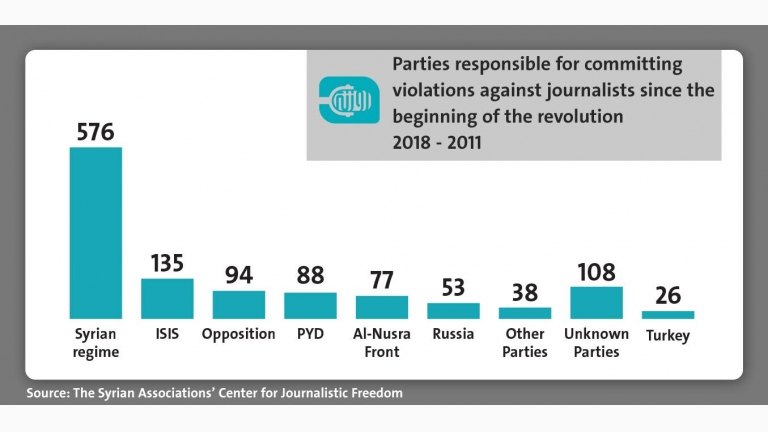 Reporters without Borders classified Syria as the second most deadly country to journalists in 2018 in its annual report published in December 2018 on the number of violations committed against journalists across the world. The organization noted that at least 80 journalists were killed worldwide in 2018, while 348 are still in custody in addition to 60 others who are in captivity. This rise in the number of casualties among media workers reflects unprecedented wave of violence directed towards media actors.

According to the same report, Afghanistan is the deadliest country for journalists in 2018, with at least 15 journalists killed. Syria comes next with 11 victims. 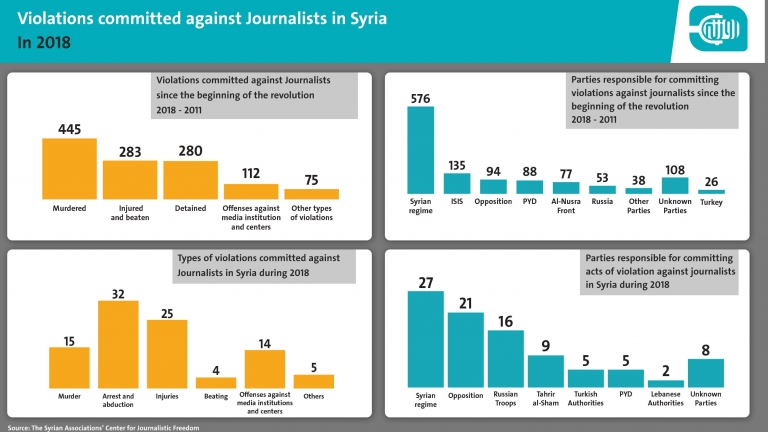 On the other hand, the SCM indicated that the number of media professionals who lost their lives in Syria reached 15 in 2018.

Syria ranked first for the most dangerous countries in the world to journalists between 2017 and 2016, where, in 2017, the SCM recorded the murder of 12 media workers.

According to the SCM’s statistics for the period between 2011 and 2018, 445 journalists and media workers have been killed, within the scope of previous cases also recorded by the centre, in addition to hundreds of incidents that included physical abuse, arrest, and detention.

The Syrian regime was at the top of the list for the most prolific aggressor targeting media workers, followed by ISIS.
The statistics issued by the SCM and the Syrian Journalists Association indicated that the number of violations committed against journalists and media workers in Syria reached 95 in 2018, most notably cases of arrests and kidnappings.