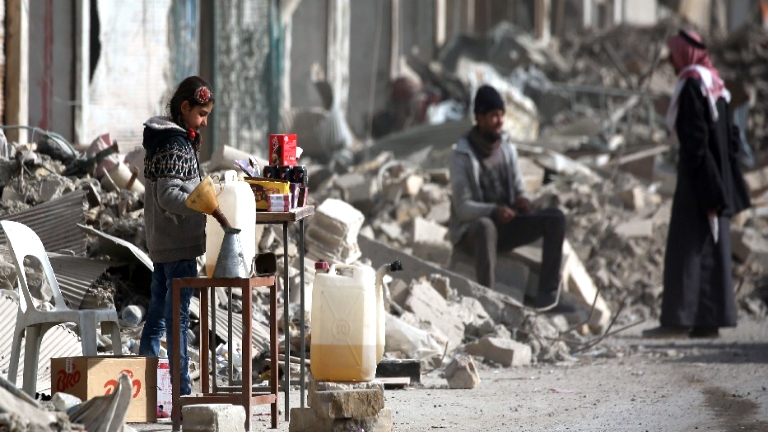 Fear of disease is the broad heading for the medical situation in the province of Raqqa, northern Syria, given the challenges facing civilians. Doctors' salaries and drugs’ prices vary between clinics and pharmacies, in addition to poverty that plays a prominent role in this war-torn province.


A health personnel in Rakka told Rozana that the health sector in the city of Rakka is deteriorating at all levels. He explained that most of the hospitals and health centers "were destroyed by the war on the Islamic State, in addition to the migration of a number of medical staff outside the city."

He pointed out that "the medical costs in the city are very high, as the doctor's examination cost ranges between 2,000 to 3,000 Syrian Pounds," while the cost of surgical operations ranges from $ 100 to $ 800. He added that these amounts are very large compared to the low or non-existent income of the citizen, which  "forced people to sell some of their property or to borrow money from acquaintances and relatives."

Disease and prices ... Obsession and horror!

Hanan al-Shaykh, from the city of Raqqa, told Rozana that people in Raqqa are afraid of the disease and of mentioning the doctor's visit. He explained that the costs of "consultations and medicine are expensive" and that “in general, few clinics and hospitals have complied with the prices set by the Health Committee in Raqqa."

Hannan pointed out that the prices of medicines "vary from one pharmacy to another," which was confirmed by one of the humanitarian workers in the city of Raqqa. The latter told Rozana that "pharmacies in Raqqa make the customer feel like as if he is in a vegetables market: you go to the first pharmacy and buy the medicine at a certain price, and move to another and you have another price .. It depends on your luck."

Ammar al-Khalaf, a resident of Ayn Issa, told Rozana about the costs problem. He said that "the medical examinations and consultations prices vary widely in the whole province, not only in Ayn Issa." He added: "The cost of consultation varies depending on your relationship with the doctor; however, strangers (ie, not from the region) pay 3,000 Syrian Pounds."

According to al-Khalaf, "there is a new phenomenon that we started to notice. You visit a doctor suffering from flu only. But, you get out of the pharmacy with a large quantity of medicines, which are expensive." He commented: "You feel like there is a contract between the doctor and the pharmacist."

For his part, Ahmad, a pharmacist in Raqqa, said that the disparity in prices between pharmacies is caused by "the fact that freight expenses of drugs sent to Raqqa vary, and medicines are subjected to customs by the forces controlling the province." He added that "there is a kind of lack of control of our regulators in the region."

Ahmad Ismail, head of the Health Committee of Raqqa Civil Council (RCC) of the Syrian Democratic Forces, said in statements to Rozana that the Committee had issued circulars determining the costs of medical examinations and all medical procedures and surgical procedures nearly three months ago. He pointed out that the majority of doctors have abided by the pricing, but others did not," and continued: "We asked people to call a number allotted  specifically to complaints, but unfortunately no one complains."

"A fine will be imposed in case the complaint was filed for the first time and the clinic will be shut down for two days in case the complaint was filed for the second time.  However, if the complaint has been filed for five times, then the doctor’s medical license will be withdrawn permanently," said Ismail. He pointed out that the committees "are monitoring pharmacy prices through regular check out rounds. We check the prices on medicines and make sure they are 100 percent correct."  However, "some others can commit violations and in case of any complaints the appropriate dissuasive sanctions will be impose," he added.

During an interview with Rozana, the Head of Administrative and Financial Affairs at the Health Committee, Khaled al-Khalil, asserted that the Committee has set up "profit ratio for pharmacist" through the prices it has set, for we have 214 licensed pharmacies and more than 80 medical clinics now."  He also stressed that until today "the Health Committee has not received any written complaint so we can follow up."

Patients with kidneys and neurological diseases are suffering without treatment

A year has elapsed since ISIS was expelled from Raqqa and its countryside thanks to the the Syrian Democratic Forces (SDF) backed up by the US and international coalition forces. Despite the opening of clinics and attempts to provide treatment, patients with kidneys and neurological diseases were still waiting for help.

Hannan al-Shaykh stressed that "despite the presence of many organizations and the opening of many private hospitals, there is only one single dialysis machine in Raqqa, forcing the citizens to travel to Damascus because of the high cost of dialysis sessions in Tell Abyad."

Sheikh stated that "as for the CT scan, MRI and X ray are not available or sponsored by any public sector, even organizations are not providing any support.  This represents a great burden for the people." The majority of civilians who spoke to Rozana referred to the same problem stressing that the closure of the hospital of Ain Issa further intensified their suffering. People have to go to private clinics, and this also adds further problems to the existing ones.

Ahmed Ismail stated: "We have equipped the Nephrology Department at the old National Hospital and installed the desalination plant. We also started the maintenance of old dialysis machine. We were able to repair three of them." He added: "International organizations promised to provide 12 devices. We hope that the dialysis devices will start operating in February. "

He also noted that "the National Hospital will start operating at the beginning of  February withall surgical specialties, including general surgery, orthopedics, neurosurgery as well as ear, nose and throat surgeries," and explained that "eye surgery,  clinics and emergency and cardiac care will begin too. "

According to Ismail, "medical staff of different specialties is available in Raqqa. There are more than 100 doctors in the city and the number of nurses exceeded 500, in addition to midwives .. The situation is good and we do not suffer from any shortage."