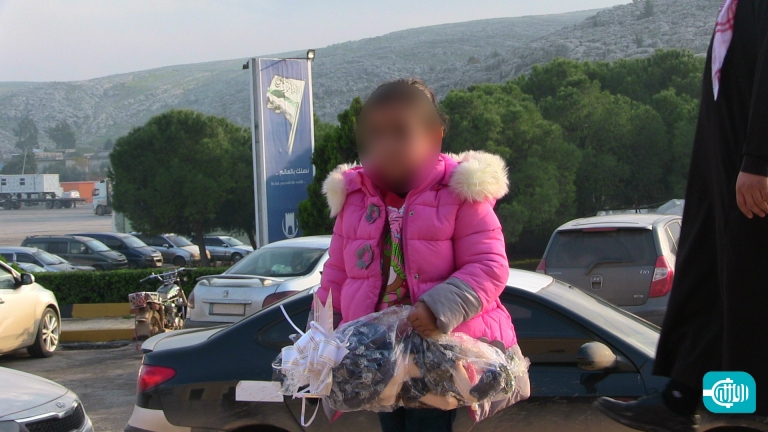 The Syrian Salvation Government of Hay'at Tahrir al-Sham in northern Syria handed over a girl to the Turkish side, which in turn handed her over to her Belgian mother. The girl was living with the companions of her father, who was recently killed in Idlib during his fight with Hay'at Tahrir al-Sham.

Rozana’s correspondent in Idlib said: "On Monday, representatives of the Salvation Government handed a girl named Yassamin to Turkey on the Turkish side of Bab al-Hawa Border Crossing on the Syrian-Turkish borders."

During a press conference that was held at Bab al-Hawa Border Crossing, on the Syrian-Turkish borders, right before handing over the girl, Ibrahim Mohamed Shasho, Minister of Justice of the Salvation Government said that “the girl’s Belgian mother has filed a lawsuit demanding the custody of her daughter after the death of her father. The judiciary ruled to hand over the child to the mother because she is more entitled to take care of her, as the girl was living with her father’s friends.

The child’s father, a French man of Senegalese origins, came to Idlib about a year and a half ago, accompanied by his daughter Yassamin without the consent of her mother, a Belgian woman of Moroccan origins, who did not join them to Syria. The father was fighting with Hay'at Tahrir al-Sham."

The French father kept the girl Yassamin with his friends belonging to Firqat al-Ghuraba, an extremist group affiliated to Hay'at Tahrir al-Sham, for which he was fighting. This group’s members have a French nationality, and it is based in the city of Harem in northern Idlib. The father was then killed in one of the battles against Ahrar al-Sham Movement.

Few months after the father’s death, Firqat al-Ghuraba split from Hay'at Tahrir al-Sham and joined the Guardians of Religion Organization, an armed insurgent group affiliated with Al-Qaeda and led by the French man with Senegalese origins, Omar Umosen, known as Omar Diaby.

Shasho added: "During the judicial ruling, a dispute broke out between the mother and the custodians of the girl. After the judiciary’s intervention to resolve the dispute, a committee was formed to resolve the disagreement and investigate the possibility of a kidnapping case and the demanding of a financial ransom from the mother from those who had the girl."

The committee ruled that the child should be handed over to her mother, and that the case should be pursued through holding those who had the child in Syria accountable, if they were proven to have been abducting her, according to Shasho.

It is noted that Hay'at Tahrir al-Sham is controlling the city of Idlib and areas in its countryside in northern Syria. It consists of militant groups, most notably Fatah al-Sham, formerly al-Nusra Front, which is classified as a terrorist group in countries, on top of which are the United States and Turkey.