Razan Zaitouneh and her Comrades: Recent Developments About the Most Mysterious Case 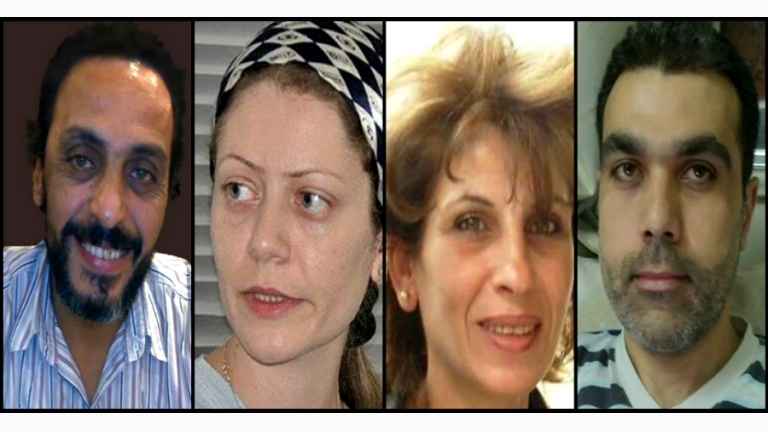 Hot events | 30 Aug 2018
On the International Day of Victims of Enforced Disappearances, Radio Rozana investigated the incident of the abduction of the lawyer and human rights activist Razan Zaitouneh and her comrades, Wael Hamada, Samira Khalil and Nazem Hammadi.

Through the intersection of information that Radio Rozana reached, it becomes clear that the main responsible for the disappearance of the human rights activist and her comrades is the deputy commander of Jaysh al-Islam, Omar al-Dirani, known as Abu Qusay.

According to non-governmental sources, we prefer to keep them anonymous for security reasons, Samir Kaaka, the Sharia judge of Jaysh al-Islam, sent a threat to the activist Razan Zaitouneh, through the commander of the so-called death squad in the opposition faction, Hussein Mohieddin al-Shazili, to leave Ghouta immediately.

Zaitouneh did not respond to the threat, pushing Hussein al-Shazili and his four accomplices, Abu Said Daoud, Abu Sufian al-Ghazzawi, Abu Karam and Khaldun al-Mamou, to kidnap all those who were in the lawyer’s apartment.

The information indicates that, after Jaysh al-Ummah sought to investigate and reveal the truth of the matter, the leader of that faction at the time, Abu Nazir Khbayeh, transferred the information he received to the top judge in the region’s judicial commission, Abu Sulaiman Tufour.

After the interrogation, al-Shazili and Abu Said Daoud were arrested. They admitted that they were carrying out the orders of Sheikh Samir Kaaka. At that point, judge Tufour asked Kaaka to appear before court to be investigated. However, he refused and later Hussein al-Shazli also managed to escape from prison.

According to similar information that Radio Rozana obtained, there is evidence of the presence of Razan Zaitouneh in a cell in Jaysh al-Islam’s prison, known as al-Batoun prison. One of the detainees from Jaysh al Ummah, named Abu Ismail sheikh al-shabab, said that he saw the name of Razan Zaitouneh written on the wall of a solitary cell.

Al- Batoun prison was located in the the Douma groves and is considered as a military facility reserved for the faction members to serve their military sentences. Hostages and military personnel from other armed formations are also jailed in this prison.

Rami Abdul Rahman, director of the Syrian Observatory for Human Rights, said in an exclusive interview with Radio Rozana that the fate of lawyer and human rights activist Razan Zaitouneh has been unknown since the beginning of 2017.

Abdul Rahman told Radio Rozana that the one responsible for the kidnapping of Razan Zaitouneh and her comrades is in Saudi Arabia to perform the Hajj. "We cannot mention the name of this man as the case is in court now and not mediatised of course.  Those who were affected by the kidnapping should have reactivated the file earlier as some of them were in Turkey and this man was there too, before he left to Saudi Arabia."

In December 2013, Razan Zaitouneh was kidnapped by an armed group in the city of Douma, after storming the Violations Documentation Centre that she run. She was kidnapped along with her team, consisting of her husband Wael Hamada, her brother in law Nazem, and the human rights activist and Samira Khalil.

Has Jaysh al-Islam faction transferred Razan Zaitouneh and her comrades to the north?

During an interview with Rozana, Mazen Darwish pointed out that Razan Zaitouneh and her comrades might have been transferred to north Syria after Jaysh al-Islam left Eastern Ghouta in April. He said that "there is a possibility, especially since there were special cars  that accompanied the convoy of the faction. Unlike the buses, we were not able to check whether they were in one of these cars or not."

Rami Abdul Rahman commented on this saying: "When Kenana Hawija has concluded a deal with Jaysh al-Islam in Eastern Ghouta, cars left without being inspected,  and they were loaded with antiquities and tens of millions of dollars, as well as figures whose names were not documented. Razan may be alive or even dead, because her presence in the north of Syria will turn the Syrian public opposition against Jaysh al-Islam, a thing that must be avoided."

In 2011, Razan Zaitouneh was granted the Anna Politkovskaya Award by the British RAW in WAR organization for her reports that depicted the crimes committed against civilians in Syria. In the same year, the European Parliament nominated her, and she won the Sakharov Prize for Freedom of Thought. Her name has emerged since the beginning of the revolutionary movement in Syria, as one of the most important activists in the field of human rights and the freedoms defense. She was one of the main lawyers to defend political detainees in Syria since 2001.