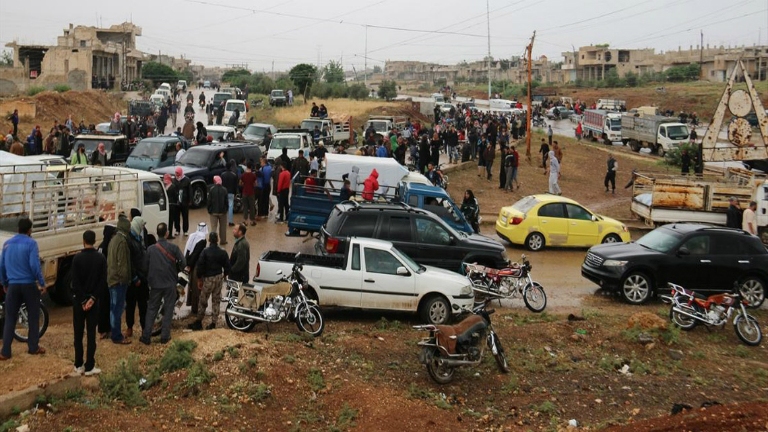 During the last few days, committees formed by the Syrian regime started registering the names of those wishing to return to their areas in the countryside of Homs (center) after a month of agreements, following which armed opposition combatants have been displaced with their families from those areas towards the Syrian north.

Local media activists say that there are more than 1,400 families who are wishing to return to their areas, amid expectations that this number will rise in the upcoming days. They attributed this to the poor living conditions the displaced people of the northern countryside of Homs have been facing.

During their reception, more than one month ago, the relief organizations were absent from the scene, while the displaced people of the countryside of Homs were transferred to camps that lack basic services, starting with the poor quality of tents to the absence of sewage networks and water scarcity, especially of drinking water, and much more.

Al-Dhahir added: "As if the displaced of Homs are a surplus or of secondary importance. The camps lack everything, including prepared lands, water, beds and tents, unlike the case of precedent displaced people, knowing that the residents have just recently been out of a siege that lasted for years, they are exhausted and do not have enough money that would help them leave these tents."

Under agreements that have been reached last month between the opposition military factions and the Russian side, more than 35,000 combatants with their families and civilians were displaced from rural areas of the cities of Homs and Hama, according to the “Relief Coordinators in North Syria.”

A few weeks earlier, a similar displacement took place. As a result, residents of several areas in the countryside of Damascus the capital left; the most prominent of these was the eastern Ghouta, where the number of displaced persons, according to the Relief Coordinators, reached more than 80,000.

The displaced people of Homs countryside, who can afford renting a house away from the chaos of the camps, are considered to be among the most fortunate people. However, there is also exploitation, and unprecedented high costs which increased in one way or another, because of the poor conditions they have already been facing.

Al-Dhahir explained that “the displaced people of Homs are exposed to exploitation, discrimination and ill-treatment. The cost of renting a bad house is 25,000 Syrian pounds (56 US dollars) at a minimum.” He noted that “each of these families needs about $200 a month as a minimum to live in appropriate conditions, especially with the lack of employment opportunities in the areas that received them and where their camps are located.

Despite the difficulty of his displacement journey and his inability to find a tent for him and his family, Abu Abdo stressed the occurrence of intrusions and attacks by the military factions which control these areas, and which, in some cases, expelled them from their tents by force of arms. He added: “they tighten the blockade; they want us to return to the regime-controlled areas.”

Most of the displaced people from the Homs and Hama (central-west) countryside areas headed for camps in the Aleppo and Idlib (north-west) countryside, which are under the control of the armed opposition.