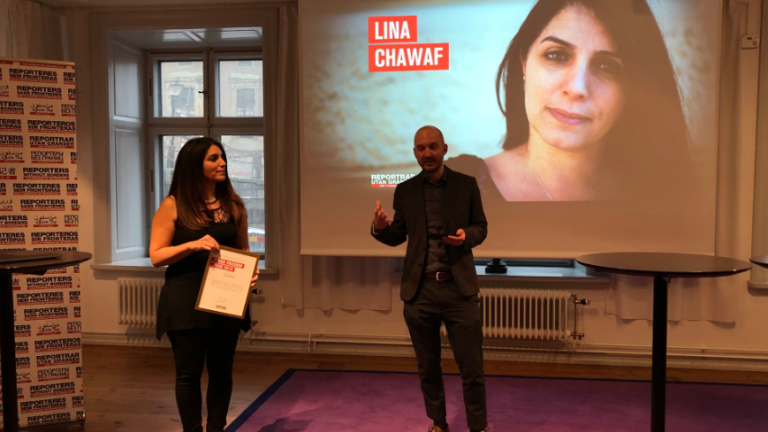 News | 03 May 2018
On Thursday, Journalist Lina Chawaf, has won the 2018 Reporters without Borders’ Press Freedom Award, in the Swedish city of Stockholm.

Reporters without Borders said that Chawaf and Rozana team have faced various difficulties in continuing the free and independent journalism work in the time of the revolutions, and providing important press reports by cooperating correspondents who have been deployed in opposition-controlled areas and regime-controlled areas.
The organization added that amidst the lack of press freedom in a country which is currently being stormed by crisis, the freedom of press is at a greater risk than ever before.

Lina Chawaf commented on her winning of this year’s award by saying that this means a lot to her and will encourage her in continuing her work, which she considers as the duty of everyone who survived (in Syria) to carry on his work so as to convey the voice of young Syrian people who have been neglected and marginalized.

During the award of the Press Freedom Award to Executive Director of Rozana Radio Lina Chwaf by Reporters Without Borders.
According to the statement which Reporters without Borders issued on April 2018, Syria has remained at the 177th position on the list of the 180 countries around the world which enjoy freedom of press and which have been mentioned in the report.
The organization also said in its report that Syria and Yemen in particular and the Middle Eastern countries in general are the most difficult and risky countries for journalism, and they are still at the bottom of the international list of press freedom.

Lina Chawaf, the Executive Director of Radio Rozana, has been working in journalism for more than 25 years. She had previously founded Arabesque FM radio station, and Mazzika Radio station in Syria before the revolution. She had also worked as an Advertising Director for Nebras advertisement company.

Reporters Without Borders is a non-governmental organization which has been founded in 1985. The organization celebrates World Press Freedom Day on May 3 and publishes a full report on press freedom in more than 50 countries.