Displaced people from Eastern Ghouta ... from cellars during the siege to humiliation in refuge centers 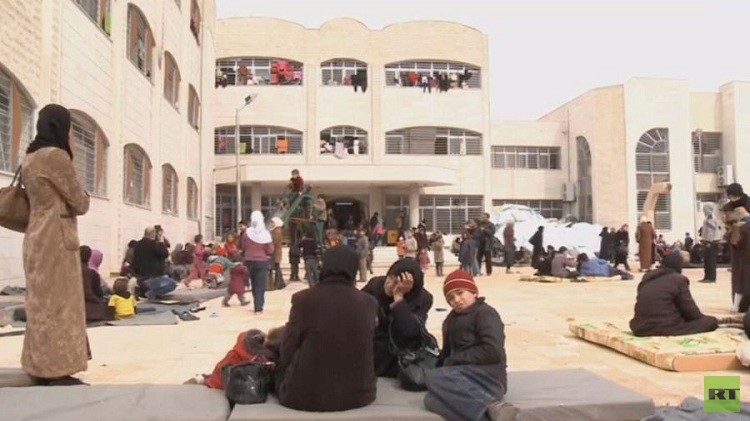 Shelters in the capital, Damascus, which are mostly established in schools to receive the displaced people of eastern Ghouta, are witnessing very tragic conditions added to the tragedy of the news coming from the region, according to the testimonies Rozana has obtained by eyewitnesses and activists present on site.

The biggest problem for the displaced people of eastern Ghouta is the Syrian regime’s as well as local and international relief organizations’ inability to respond to the emergency situation there, meet the needs of the displaced, which range from decent places of residence, bathing places, to safe drinking water, as well as the shortage of staff.

During an interview with Rozana, Samer, an activist in the region, stated that the Syrian Red Crescent organization recalled its staff from Damascus suburb, Homs, and Suwayda branches in an attempt to secure the residents necessities and needs. All the international organizations working in Damascus shifted their focus to the ongoing situation there.

A source in the Syrian Red Crescent told Rozana that the organization will be unable to receive more displaced persons in light of the shortage of staff members. The administration of one of the shelters distributed a decision allowing the displaced people to leave the center and head toward the capital Damascus, if they have relatives there.

Samer explained that the housing centers in Adra and al-Duwair, which are currently hosting about 80,000 people, are suffering from a deplorable situation with shortages of staff, water scarcity, and lack of hygiene and bathing facilities. He added that a large number of refugees had to sleep outdoors in the past few days.

According to the reporter of Shahed Aayan Network, despite their readiness most of relief and non-governmental organizations, which responded to eastern Ghouta refugees, were not allowed to enter the shelters only ten days before the wave of displacement began this was due to organizational factors.

The reporter added that because of the huge number of the displaced, the person would get only one meal a day and even fresh water is difficult to get. This is added to the fact that the meals served are often uneatable, according to the displaced people.

As far as the health conditions are concerned, the reporter revealed that vermin is spreading in addition to many skin diseases, and cases of hepatitis "C". He attributed this situation to the fact that the residents were staying in cells and subterraneous shelters filled with mold and moisture, before leaving Ghouta. He stressed that "some people did not have a bath for more than a month."

It seems that the children, who are already suffering from severe psychological trauma, represent the most affected group. "Some of these children couldn’t recognize bananas. A boy ate bananas without peeling it. Others tasted white flour bread for the first time," said the reporter of the network.

Finally, the correspondent explained that the Syria Trust for Development (NGO) has become responsible for legal matters, such as birth registrations, family registry and marriage documentation. The NGO is doing so without requesting documents or witnesses amid a state of chaos, haphazardness, and bribes.

As for the families who prefer to leave, the reporter spoke about the "impossible requirements" of the process. Mothers, grandmothers and their children, who are under the age of 15, are allowed to leave in case they had a guarantor, while boys and girls over the age of 15 are prevented from leaving. Consequently, this threatens to disperse families.

These tragic situations occur at the refugees’ centers while the wave of displacement continues from eastern Ghouta, where around 400,000 people used to live, under an ongoing rigid siege imposed by the regime forces since 2013.

The shelters set up by the Syrian regime in Rif Dimashq are packed with thousands of civilians who have run away from the bombing and battles in eastern Ghouta and whose numbers are estimated by the United Nations to reach tens of thousands in recent days.

After a large military operation launched about a month ago, the regime forces, backed by Russian military forces, recaptured the majority of Eastren Ghouta's cities.

Russia has also headed the negotiations with the most prominent armed opposition factions in the eastern Ghouta, Faylaq al-Rahman and Jaysh al-Islam, and a compromise was reached.

The compromise allowed a large number of opposition fighters and their families to leave the besieged area and head towards the Syrian north.

The city of Douma is the last city in eastern Ghouta that is still under the control of the armed opposition, represented by Jaysh al-Islam. Negotiations are still going on between the regime and Russia on the one hand and the faction on the other.