Eastern Ghouta... A Few-Hours Truce For Citizens To Take Some Breaths Filled With Blood 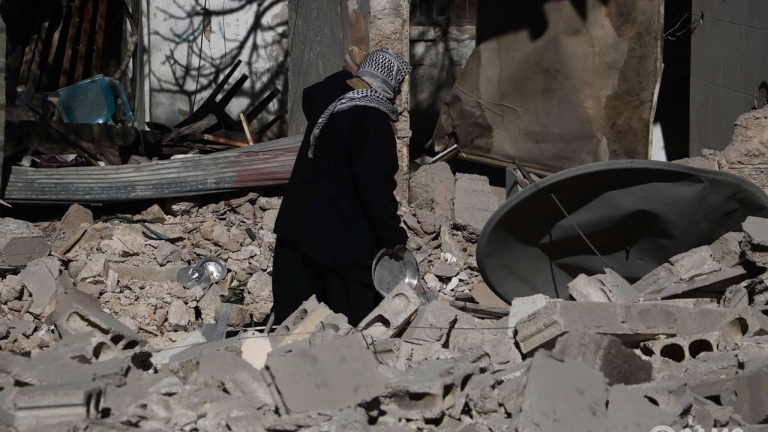 Hot events | 02 Mar 2018
The Syrian army has been waging its escalation campaign, supported by the Russian air force, on the besieged Eastern Ghouta in Damascus countryside for the third week now. Its 400,000 citizens have accordingly been given a taste of every possible atrocity. Children, women, elderly and young people are still suffering without perceiving any possible ray of light at the end of the tunnel that can be a sign of a nearing end to their misery.

Rozana conducted an opinion survey among a wide range of besieged civilians in the besieged Eastern Ghouta, about the daily five-hour "humanitarian truce" declared by Russia, amid a state of dissatisfaction which most of them talked about, because of "the Russian side's non-compliance with its commitments" throughout previous years.

Hamza al-Najjar, a resident of Duma, 10 kilometers in the Northeast of Damascus, said: "During the first hours of the Russian truce, the towns of Douma, Harasta and Arbin were bombed by air strikes and artillery shelling, killing five civilians. Najjar wondered "Which truce are we talking about? After all, this word has become source of great pessimism for the citizens of Ghouta, as it is usually accompanied by a potential escalation."

Ghouta markets, towns and shops witness a cautious tranquility whenever their gates are open for quite short periods of time, amid great concern over possible massacres that can happen then, in conjunction with the intense and continuous reconnaissance flights over Ghouta.

Abu Hisham, a shop owner in the town of Mesraba (part of Duma), told Rozana Radio that "he reluctantly opens his shop during the truce hours," and pointed out that he feels uncomfortable because of the continuous reconnaissance aircraft flights along with intermittent shelling during the truce hours.

Abu Hisham added: "I make a remark to anyone who stands in front of the shop that he should not park his bicycle there for fear that bicycles gather in one spot, which poses a risk to the region because of the aerial photographing of the reconnaissance aircrafts."

In a statement that it published on Sunday, Médecins Sans Frontières (Doctors Without Borders) organization said there has been a total of 770 victims, within 10 days between February 18 and February 28, as a result of the attack the Syrian regime has launched with Russian support.

From its side, the Russian Defense Ministry announced on February 27 a "humanitarian truce" with the aim of opening humanitarian passageways for the exit of civilians, which states that the regime forces would stop bombing Ghouta between 9 a.m. to 2 p.m.

Electronic devices markets have been very active because the citizens have been selling their belongings, including mobile devices, motorcycles or laptops, due to the urgent need for money.
Manal, a resident of Saqba, one of the towns of Eastern Ghouta, stressed that she had to sell her mobile phone in order to provide food and foodstuffs for her orphaned children, after the disruption of education in Ghouta for the second month in a row, which led to the cut off of her monthly salary, which is her only source of livelihood.

In contrast with the Russian version, Al-Wafddien Camp crossing, which the Russian side has announced as a "humanitarian passageway", has never witnessed any movement of civilians attempting to leave Eastern Ghouta through it, apart from two Pakistani citizens who were let out after their foreign ministry’s efforts, and two Syrian children, about whom Russian media said they had escaped from Ghouta, and aired a video whose credibility has been denied, showing the evacuation process.

Following the fierce military campaign the Syrian regime forces have launched, supported by Russian air cover, the situation in Eastern Ghouta has moved from bad to worse, for the region had been suffering, even before the campaign, from a suffocating siege which has damaged crops and seeds over the last four years.

Children of Eastern Ghouta have a different story to tell about their misery. Most of them suffer from fear and depression, because they have not been exposed to light for a period of no less than twelve days. Others suffer from different diseases as a result of the non-suitable shelters they are hiding in, lack of ventilation, severe cold in conjunction with lack of heating and hunger.

The increase in the prices of food, the lack of medical and pharmaceutical materials, and the high prices of fuels, if found, have deepened the suffering. Parents have been obliged to get out of the basements in order to secure their daily living, which is mostly no more than one meal per day, amid absence of hope and expectations that a solution will soon save them from what they are going through.

The Security Council unanimously voted in favor of a Kuwaiti-Swedish decision to declare a 30-day truce in the Eastern Ghouta. The resolution called on all parties to ceasefire in all areas without delay, and it stated that safe and unconditional medical evacuation must be carried out and that those who work in the medical and humanitarian sectors have to be given permission to move without hindrance.
Syrian American Medical Socity (SAMS) said to radio Rozana that about 90 people were killed overnight in the towns of Al-Ghouta after being subjected to heavy bombardment of cluster bombs, napalm, chlorine and phosphorus yesterday night. SAMS confirmed that 29 sufferers of suffocating gasses reached their medical facilities, including 15 children suffering from breathlessness.

A convoy of humanitarian aid consisting of 46 trucks for 27,500 people, the first to enter Eastern Ghouta since the escalation started more than two weeks ago, entered the fighting zones, while the regime’s forces did not allow the entry of many essential medical supplies, including First Aid Cases, according to the United Nations.