I will tell you about them... We owe them! 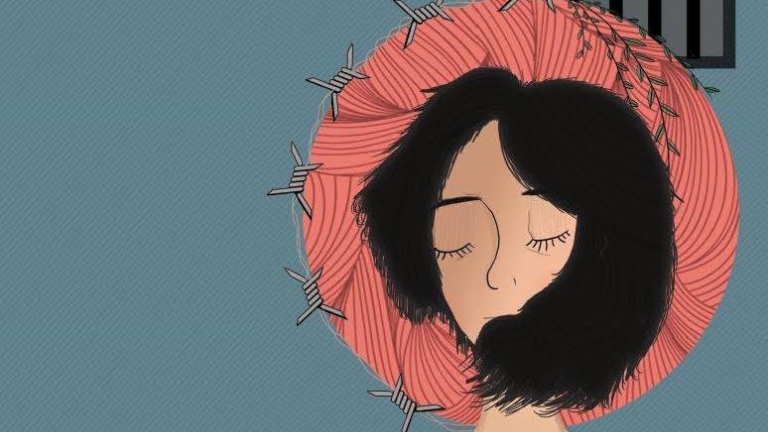 women
woman | 01 Dec 2016 | Lama Rajeh
Within the campaign of Detainees_Are_Beauties, which is launched by "Peace Loop of Gaziantep" and "I am She" Network, journalist Lama Rajeh wrote:


Before the outbreak of the Syrian revolution in 2011, I have never thought what it means to be a detainee, and your freedom is choking between the walls of nowhere.

Since the outbreak of the revolution in Syria, the word of Detainee has dominated my thinking, and I tested its bitter the first time I met "Hiba". That day I was in the city of Moadamia in Damascus suburb, and some people there told me her story, but I did not believe what I have been told about the atrocities she was exposed to, until I met her, and she told me her story and what exactly happened to her.

The Fourth Military Group stopped her on the road, she was accompanied with her mother-in-law, while their return from the hospital, five days  after she gave birth. One of the soldiers asked them to get out of the Car and took them into a room on the checkpoint, where both of them have exposed to sexual abuse, beating, and humiliation.

I met Hiba for no more than 45 minutes, I could not bear the pain she exposed to, I felt as I was living it instead of her, and came back home hoping to write her story, but I could not write a single word.

Although her story remained inherent to my thinking and her words in my ears, but I tried to forget her. I lied to myself and tried to persuade it that this is normal, because this is the first time I have ever met a detainee during my work as a journalist, and that with the passage of days, I will get used to this kind of stories. But every time I meet a survivor from detention, or read a story about one of them through media, I feel a chill provokes the pores of my skin, a sense of helplessness in front of their suffering, especially in the Syrian regime prisons.

Between March 2011 until November 2015, the Syrian Human Rights Network documented the detention of more than 7029 women, including 6711 adults and 1115 cases of enforced disappearance, and that was in a published report entitled The "Syrian Woman in the Middle of The hurricane".  As well as the Network published another report in 2016, entitled "The Prolonged Pain", in which it documented no less than 2377 cases of enforced disappearance at the Syrian regime prisons.

The real catastrophe was when I saw the picture of "Rihab Ellawi" for the first time, with her lying corpse between many other corpses, and on her forehead and chest, was written the number 2935, I looked in her bluish face and tried to imagine my body instead of hers, and wandered what was she thinking the moment she died? Did she wish to die or she was still having many dreams to achieve. Did she thought about her parents? And wished they will not be sad after she dies .. did she had a lover who she longed to see before she died? Did she resist her killer and tried to grab the rope of life before she left us to the other world.

Many questions came to my mind, about the secrets of "Rihab" that remained obscured after she died, like 24 other women whose death under torture was documented by the "Syrian Human Rights Network", and that was through a report was published by the network, entitled "The Filmed Holocaust" in 2015.

I looked again in Rihab’s face in the picture, it was revealing the falsity of the International Community, is it rational to be tortured and killed with other 24 women among this international silence? And her picture remained just a leaked picture for a young girl who was murdered under torture, while the killer is still free.

Many released detainees escaped from the prison to face the other detention which is their society! On one occasion, a friend of me said to me after she was released: "Detention is levels, the prison level, and the post-detention level, and you can call it the society prison."

After the detainees are released, they are shocked by the stereotype has been drawn for them already, and they are showered with questions by their relatives, whether they are still virgin or they lost their virginity, as if the hymn is more important than their freedom for some people! Within this social anxiety, how many social rapes were committed against the women detainees, either by their parents, relatives, or husbands. But what is the value of hymn compared to physical and psychological torture they have exposed to, boxing, beating, hanging, electric shocks, humiliation, and using them as a war weapon.

Despite the fact that not all detainees were raped, but this does not deny the charge on the Syrian regime, where soldiers raped many women inside the security branches,  in order to blackmail their opponents, or to torture them for being an opponent to the regime themselves, and this fact was confirmed  by the "European-Mediterranean Network" through a report was published in 2015, named "Detention of Women In Syria: A weapon of War and Terror".

Rape was not only limited to sexual rape, or social rape, where there is also the media rape practiced by the Syrian regime against detainees in forcing them to speak through TVs, in order to prompt the propaganda  of  "Sexual Jihad" among the opposition faction, to distort the image of the opposition and offend the dignity of the revolutionary women.

In 2013, the official Syrian TV broadcasted a documentary for 3 women detainees: "Sara Allouh", "Fatima Farroukh", "Firyal Abdul Rahim" , who spoke about forcing them on having sex with gunmen in the opposition factions, and that poor play on the regime’s media was directed by the Syrian regime.

The Syrian TV did it again in 2014, with another girl named "Rawan Qadah", (17 years), where she said in an interview with her on the Syrian TV, the her father exploited her sexually and forced her to have sex with soldiers in the opposition factions. Seemingly, the media makers lied and lied until they believe their lies, where the "Syrian Human Rights Network" documented forcing no less than 14 women  including minors to speak through the official Syrian  TV that they had sex with the opposition fighters.

These practices by the Syrian regime are considered to be a violation to the International Law, where the "Protocol II" added to Geneva Conventions, forbid killing, distortion, torture, soulless cruel treatment with detainees, hostage-taking, and the unfair trials.

In 2016, the "Syrian Women Network" launched a media campaign entitled "Syria is a Homeland .. Not a Prison", demanding releasing detainees women and men through several activities included preparing a booklet that extrapolates the reality of detainees women and men under the tyranny of the Syrian regime and the simulated trials that cover the Syrian regime’s crimes against detainees. During my participation in preparing the booklet I was struck by a division entitled "Prisons’ literature", that highlighted the experiences of men and women writers who have exposed to detention, that booklet prompts me to try to know more about "Hanadi Zahlout", who has been detained in the beginning of the Syrian revolution by the "Air Branch", through her book "Letters to My Daughter", she outlined her experience in detention, and encouraged the idea of blogging and writing biography, that seemingly was her way to unmask the terrorism of the Syrian regime practiced  against detainees, as well as the situation of "Hiba Dabbagh", who told the details of her detention through a novel called Only Five Minutes, the novel was about a detention lasted for 9 years, but through Hiba’s words it seemed as if it was 9 thousand years of torture and humiliation inside the Syrian regime prisons.

The Syrian memory today is full of several Syrian women writers who has lived the experience of detention and who documented their experiences through literature such as "Hasiba Abdurrahman" and "Rosa Yassin Hassan".

In addition to the campaign Syria is a Homeland, Not a Prison, the human rights activities have not hesitated to launch other advocacy campaigns, demanding releasing detainees women and men, and despite of rejecting these campaigns by many, under the pretext of that it is not effective or useful anymore, especially after the detainees’ file was politicized, but still, the advocacy campaigns is one of the important tools to convey the detainees’ voice from inside prisons and security branches, and it indicates to the right of detainees in keeping their case fresh in our minds, that’s why the "Peace Loop of Gaziantep" has launched an advocacy campaign entitled "Women Detainees Are The Beautiful", where the prisons today are filled with detainees and forcibly disappeared women, and who knows? Maybe these advocacy campaigns will be useful one day, in line with Article )12( from the Security Council Resolution No. 2254, and what was stated in Geneva Accord No.1, as well as the common Article"3" from Geneva Conventions, and the "Protocol I"I added to these conventions within the Humanitarian International Law.