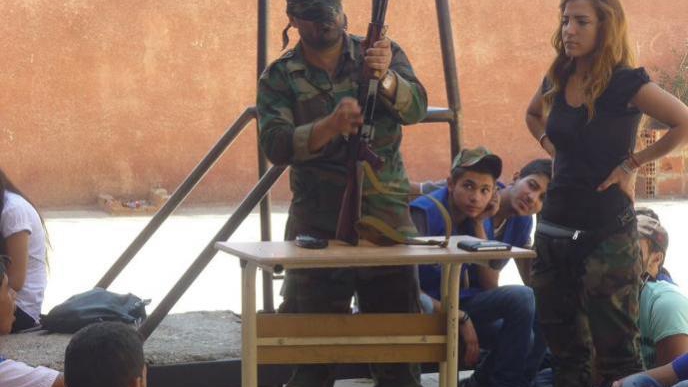 Mohammed Ibrahim Abbas, from the village of Soweideh in the Masyaf countryside, volunteered in the Syrian regime army. The Admissions Committee reviewed his application and accepted it, despite the fact that he had not even reached the age of eighteen. Only a few days later, he returned a dead corpse.

Many young people below the age of eighteen flock to the Military Security detachment in Masyaf, to volunteer in military intelligence. They provide their names and their data, then receive a security card after only one week.

Those admitted are then placed in an open Pickup car, and hauled off to the "Deir Shmayyil" center in the countryside of Masyaf—previously a center for Baath youth courses, converted now into a training center for regime fighters, a security headquarters, and detention center.

After finishing their brief ten-day training stint in "Deir Shmayyil," the underage volunteers are then thrust into the battlefield, where many of them perish during the first days of the fighting, due to their lack of experience and impulsiveness.

The number of Alawite volunteers in the military and intelligence services has dwindled, with the increasing numbers of dead. The regime allowed admission of youth under eighteen years, to offset the scores of fallen fighters.

A teacher in the Masyaf countryside tells Rozana: "It is quite easy to control the minds of this group of young people. It is enough for the regime, via its loyalists in the region, to disseminate the idea that the end aim of the opposite side is to eradicate Alawites. These youngsters will rush to volunteer to protect their community."

A young man who was unable to stop his own brother from enrollment in the regime's forces, sees the reason behind youth volunteering as being the temptations of swift riches that are promised, through theft and plunder, as he puts it.

Songs charged with sectarian themes also help the incitement, according to Ahmed from the Tartous countryside: "When they minors hear songs reminding them of the fate that befell Ahl al Bayt [the descendants of the prophet, Ali's Kin] at the hands of the Umayyads, or other songs proclaiming the rise of the Alawite tide; some of them rush to join al-Hussein [the martyred son of Ali and grandson of the prophet, a central figure in the Shiite faith] as they think."

The regime also exploits what some of the hardline opposition factions spread about eliminating the Alawites, such as the infamous "with slaughter, we come to you" slogan. The regime's security channels use such rhetoric to encourage minors to join the army.

In this regard, one of the regime opponents in Tartous explains: "The idea that if we did not go to fight the oppositionin their areas, they will come to fight us in our villages, has gained much circulation among Alawites" he says. He adds that this idea has an appeal among minors for various reasons, while it has no currency among the older generation.

A Clear Violation of The Law

Syrian law requires that those who wish to enter the army or security corps, or any related position, be eighteen years of age. Any infraction of this requirement is considered an explicit violation of the law.

Ahmad, a lawyer, says: "Admission of this category into the army and thus jeopardizing their lives, is a clear violation of the law. Those committing such violation and must be held accountable." He adds that Syria is now "a country of non-law. Every party is seeking to defeat the other party, regardless of how such victory is achieved."

On the other side, many minors met a similar fate on the opposition side. Many of those enrolled in the armed opposition and extremist groups have been killed, an issue raised in a report by Human Rights Watch last June.

The report stated that "non-state armed groups in Syria have used children the youngest of whom were 15-year-old in fighting battles." The report documented the experiences of 25 children, who were former soldiers in the Free Syrian Army, the Islamic Front, Al-Nusra Front, and ISIS.