Syria: Every woman is exposed to harassment… Where is the law?

Syria: Every woman is exposed to harassment… Where is the law?
Rozana
Investigations | Sunday 02nd September 2018
Sexual harassment is still continuing in Syria until the time of writing this investigation. Between harassment mixed with humor and physical harassment, Syrian women are still vulnerable to and alone face to psychological and physical violence.

Questionnaire Syrian Women's Network: Every woman in Syria is exposed to harassment

In this investigation, Rozana Media Foundation worked with the Syrian Women's Network to assess this issue and monitored stories of Syrian women and girls revealing their experiences with the reality of harassment in Syria.

According to a survey conducted by those who prepared the investigation, 100% of the female respondents confirmed that they were harassed, although the harassment methods were different.

After determining the results of the questionnaire put forward to monitor the phenomenon by the Syrian women's network, which was answered by 118 women inside and outside Syria, it showed that the harassment rate in the street ranked first, harassment in the working environments ranked second, harassment at home ranked third, and finally comes harassment at school or university. The percentage of the occurrence of harassment during the day reached up to 72%.

The results of the survey showed that harassment is not an emerging phenomenon in Syria, as it has not appeared due to the war. It is rather an old phenomenon, as females at the age range between 18 to 50 years have responded to the questionnaire.

It was noticed that the vast majority of women are ignorant about the laws that protect them from harassment, especially those in the age range of 18-50 years old, the age at which women are mostly exposed to harassment, according to the answers we received. 83% of women in this age range do not know the law, and those who knew about the laws were by self-initiative only. 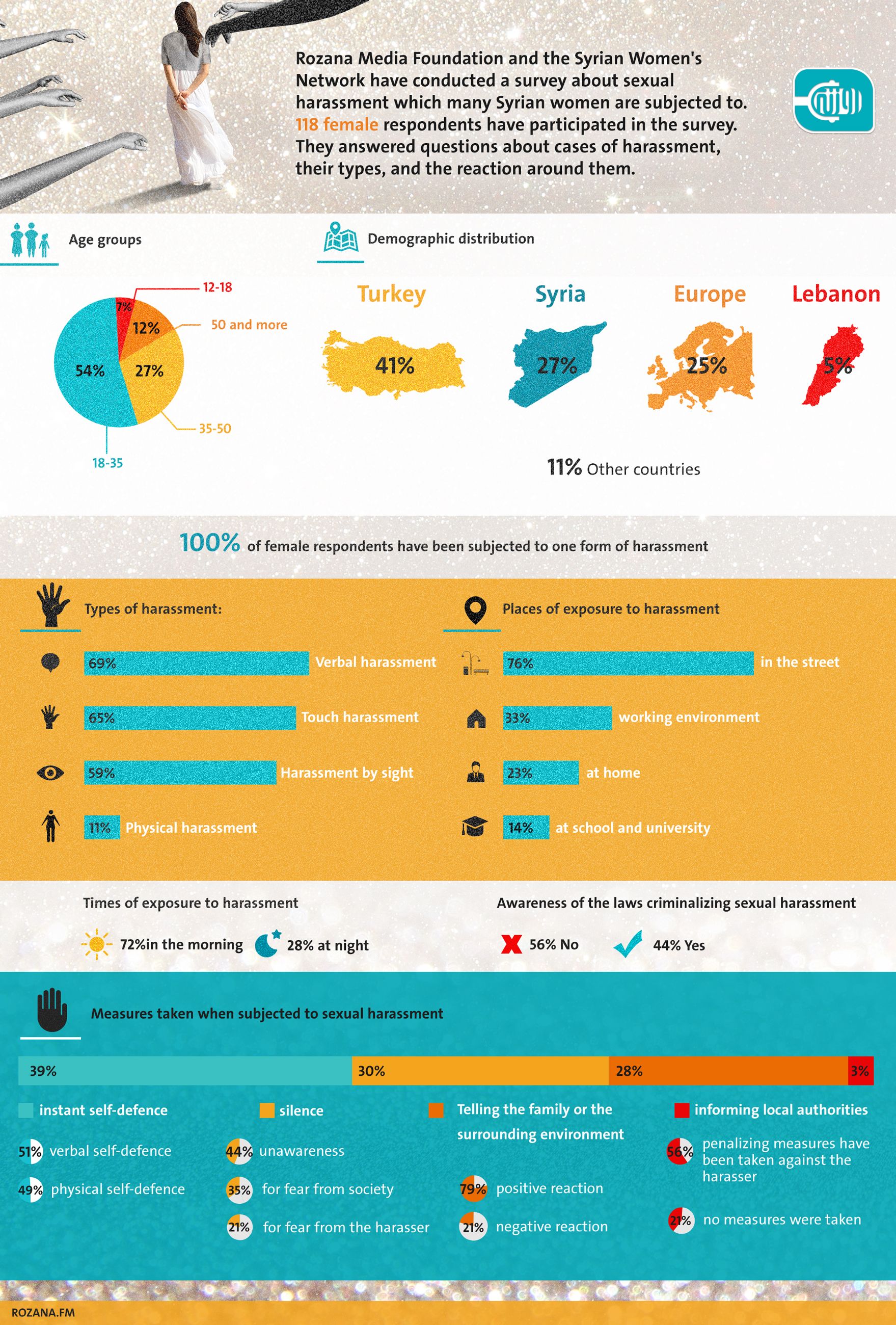 The judiciary does not constitute a safe haven for girls to face fear of scandal and society. They have doubt about their ability to legally obtain their rights, according to lawyer Da'ad Musa. In addition, girls prefer to defend themselves either verbally or physically.

Lawyer Da'ad Musa says that "the Syrian Penal Code does not define harassment and does not penalize it. It rather sets out articles that deal with acts of indecency and violation of public modesty and penalizes them."

Lawyer Musa explained that article 506 of the Penal Code provides that "who he proposes to a girl under the age of 15, or a girl or a woman who is over 15 years of age indecent acts or tells them indecent words shall be penalized by imprisonment from one to three days, a fine of not more than seventy-five Syrian liras or by both penalties. "

The lawyer explained saying: "Proving this act requires witnesses and action by the society. In case this act occurs in dark alleys or without the presence of witnesses, it becomes difficult to be proved. If the girl or the woman is subjected to a terrible looking or a bad word that does not catch anyone’s attention in the street, she cannot file a complaint against him."

Da'ad Musa said: "Since the holding of the Fourth World Conference on Women under the title Action for Equality, Development and Peace, or the Beijing Conference, there has been a lot of movement to combat harassment and violence against women. However, there has been no cooperation from the Syrian government to make the appropriate amendments."

She continued: "Since then, women's associations, workshops and seminars have not stopped issuing studies and proposals to amend the laws of violence and harassment."

Despite the ratification of CEDAW, lawyer Da'ad Musa, who specializes in women's issues, said: "There is no serious will from the part of the legislative authority to make these amendments," and considered this as a kind of "deliberate disregard".

Without passing these laws and amendments within the legislative framework for their  protection, women will remain destined to come with new ways to be able to confront the different forms of harassment and to stop hearing sentences such: "Give me a kiss from these lips... Do not be afraid, nobody’s watching."

Second-hand clothes, The only option left for displaced Syrians