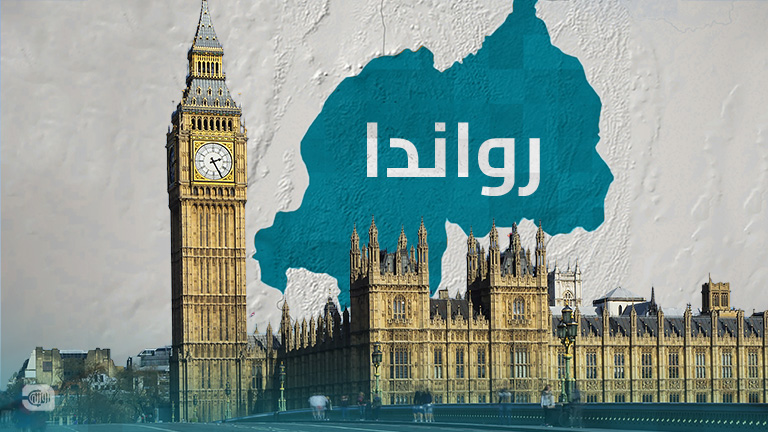 After weeks of controversy and days of anticipation for the date of the departure of a plane from London to Kigali, the capital of Rwanda, where it is supposed to carry the first group of asylum seekers deported from Britain to Rwanda. However, the last hours witnessed dramatic developments that led to the cancellation of the flight.

What is Britain's new plan for asylum seekers?

The beginning was in last April when Britain announced a new policy stipulating the transfer of some asylum seekers to Rwanda, as a part of a five-year pilot plan. Where British Prime Minister Boris Johnson says that the plan may include everyone who entered the country illegally after January 2022.

As soon as Britain announced its new policy, this aroused criticism from the United Nations, activists, British human rights organizations and bishops, in addition to a wide interaction of what the "Times" newspaper reported from a witness who said that he heard Prince Charles describes the plan of Johnson’s government towards asylum seekers as "horrible."

The plan stipulates that Britain pays 120 million pounds as a down payment to Rwanda in exchange for processing the files of asylum seekers on Rwanda's territory. Subsequently, the deportees may be granted permanent residence as refugees in Rwanda, or may submit an application to Britain for the "most vulnerable" cases, or seek asylum in a "safe third country" in case they do not obtain a residence permit in Rwanda. 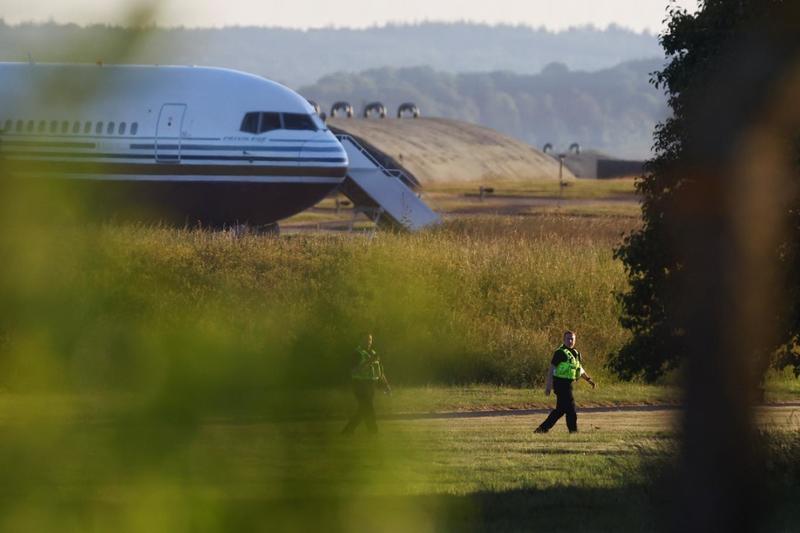 The first plane was scheduled to take off last Tuesday evening, with about 37 people on board, before the number was reduced to only seven after appeals were submitted to the British judiciary.

Hours before the take-off time of a Spanish chartered plane, activists demonstrated in front of the detention center for asylum seekers who decided to be deported, they remained until it was announced that the flight was canceled after the European Court of Human Rights intervened "in the last few minutes" through demanding that "an Iraqi asylum seeker should stay because there are no guarantees for his legal future in Rwanda."

Syrians were informed of their deportation to Rwanda... How many?

In general, there is no clear number of asylum seekers who received notices of deportation from Britain to Rwanda, however, the organization "care4calais" says it has followed up on 113 cases, including seven children, noting that seventy percent of the persons threatened with deportation were victims of torture and trafficking during their asylum journey.

The organization says that one-third of the group it is contacting is Sudanese, while Syrians are the second-largest percentage (without specifying their number), in addition to people from Iraq, Iran, Albania, Eritrea, and Afghanistan.

"care4calais" organization quoted from Syrian people it met that they only immigrated because they were recruited into military service, and they did not want to kill others. "The war in Syria is complicated, there is no right side," said one of them while he was talking about the murder of his brother by a sniper when he was accompanying his mother. Now, he is afraid to tell her that he may be deported.

Through its reports, the organization tries to provide information and statistics contrary to what the British government says that all the deportees are single young men and that the goal of the new policy is to combat human trafficking via the English Channel from Calais, France.

The British Home Office says that 9 percent of those who crossed the English Channel via small boats last year were Syrians, while 30 percent were Iranians and 21 percent were Iraqis. 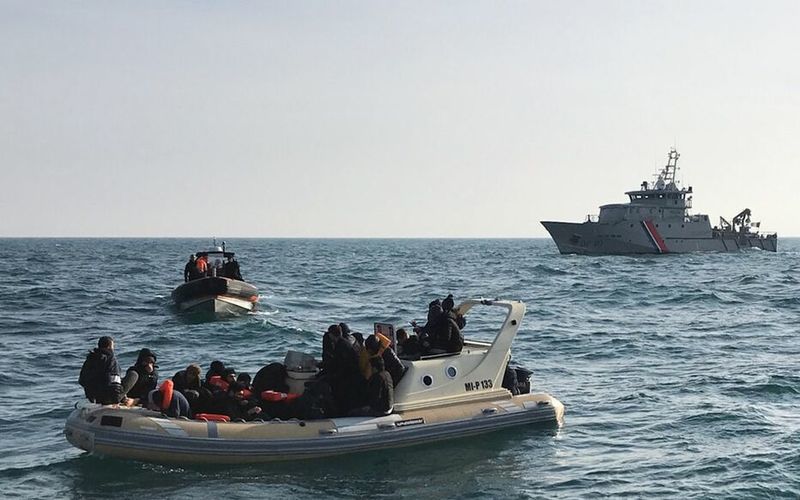 A boat from the National Society of Sea Rescue (SNSM) rescues migrants on a boat, Agence France-Presse / SNSM

What is the goal of the government's new policy and what do critics say?

Several demonstrations and protests took place in Britain due to what was described as the "immoral and inhuman" policy against asylum seekers, while dozens of human rights organizations demanded to stop deportations to Rwanda, but an official confirmation stated that the policy was "completely legal."

British Foreign Secretary Liz Truss said the policy is legal, ethical, and effective since it fights human traffickers, she added: "The important thing is that we start to thwart the horrific work of traffickers, who traffic in misery, this is the reason of our policy."

On the other hand, British bishops said that this policy brings "shame to us as a nation (...) shame control us, because our Christian heritage should inspire us to deal with asylum seekers with mercy, fairness, and justice, as we have done for centuries."

British Prime Minister Boris Johnson tweeted: "We cannot allow people traffickers to put lives at risk and our world-leading partnership will help break the business model of these ruthless criminals."

For his part, the spokesperson (home affairs) of the Scottish National Party (SNP) home affairs, Stuart McDonald, responded: "This is not world-leading policy. If anything, this is leading us to the total shredding of the refugee convention, this cash-for-deportations policy is akin to state-sponsored trafficking and transportation."

Care4calais organization demands granting a visa for asylum seekers in the same way Britain treats Ukrainians "who do not have to risk their lives via small boats", considering that would stop people traffickers immediately.

In its comparison, the organization pointed out that Britain received this year about 200,000 Ukrainians, equivalent to the number of illegal immigrants crossing the Channel from France to Britain for the entire seven years.

Why Rwanda? and what is the situation there?

In April 1994, Rwanda, which is located in east Africa, witnessed a genocide that resulted in the killing of one million people. Estimations indicated that cases of rape were nearly a quarter of a million in the small country of 13 million Rwandans.

For the time being, Rwanda is described as the "bright face of Africa" and its "symbol of modernity", due to what the country has achieved of renaissance and growth of the economy, a decline in poverty and illiteracy rates, and the increase of the value of the gross domestic product. Moreover, the capital Kigali is now described as "the most beautiful, cleanest and most attractive city for tourists in Africa."

This is the reason behind the British government's insistence that Rwanda is "one of the safest countries in the world", which is contradicted by the letter of "Human Rights Watch" sent to the British Home Office. The letter talked about the disservice against immigrants, documenting violations, arbitrary detention and cases of torture in the country that is ruled by President Paul since March 2000.

A video from Rwanda by the Libyan YouTuber "Rahalista".

Rozana monitored videos published on the internet showing the spread of poverty and the absence of services in large areas in Rwanda, besides comments on social media groups for Arabs who reside there. A large number of comments confirm the high cost of living and the difficulty of investing or starting private projects, advising "not to come to Rwanda … they say: Everything you read about Rwanda is a lie."

Does the cancellation of the first flight mean the end of the British deportation plan?

British Home Secretary Priti Patel said after the cancellation of the first flight that the government of her country is persistent with its plan, and it started to prepare for future flights, she added: "We will not stand idly by and leave the organized crime syndicates, who are despicable in their nature and behaviour, and they are evil persons who treat people like goods."

Next July, the British judiciary will implement a full review of the appeal submitted against the new government's policy for asylum seekers. While Mark Serwotka from the Public and Commercial Services Union (PCS) describes the situation as "appalling" if it is proved during the full hearing that the deportations that were scheduled to take place are "illegal".

British charitable and humanitarian associations and activists continue their judicial battle to thwart and abolish the decision, most notably Detention, Care4Calais, PCS and Asylum Aid.

The "Sada Alsharei" program discussed the possibility that countries might change their policies regarding asylum seekers. The responses and viewpoints were varied. To watch the full episode: